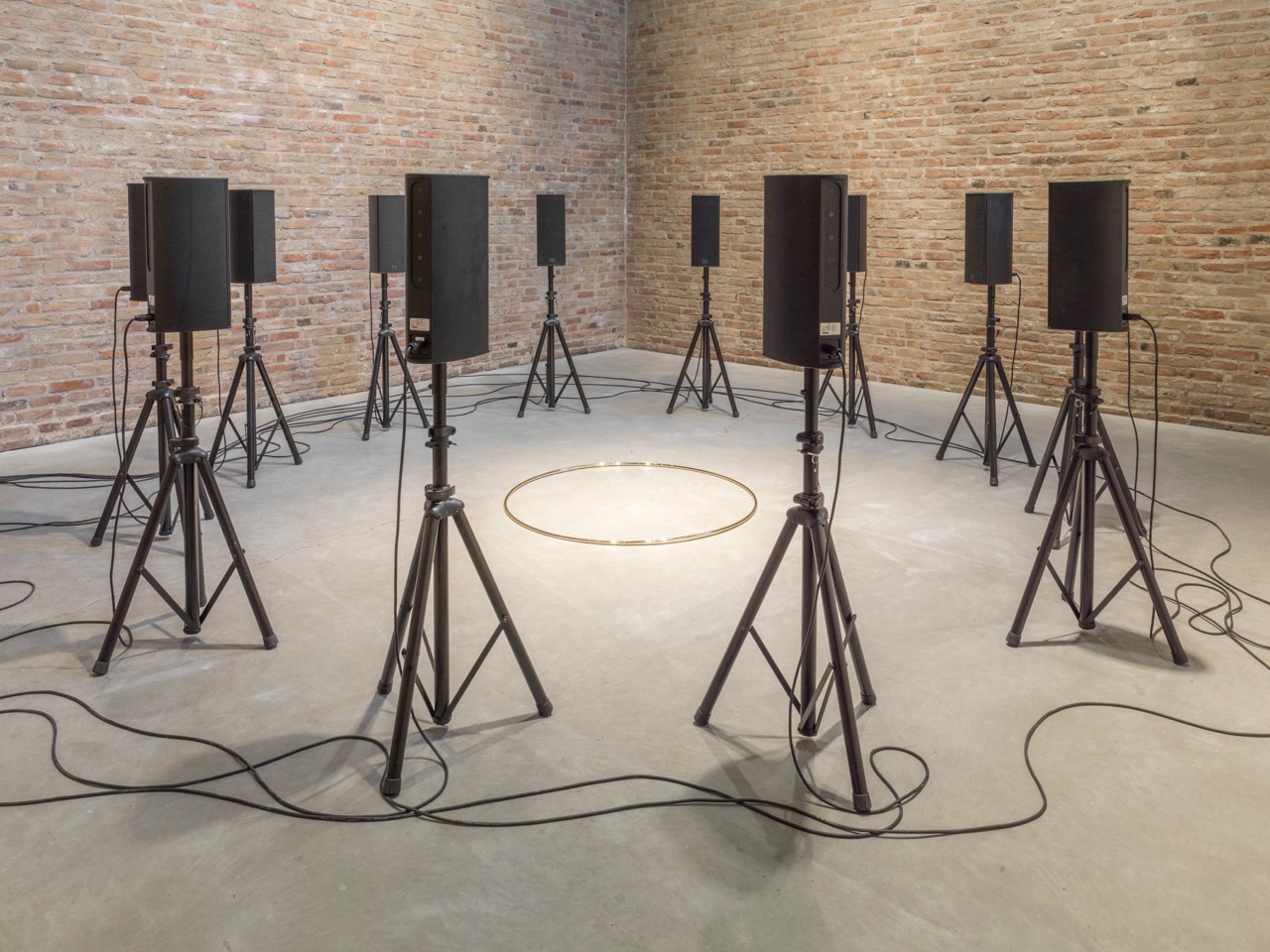 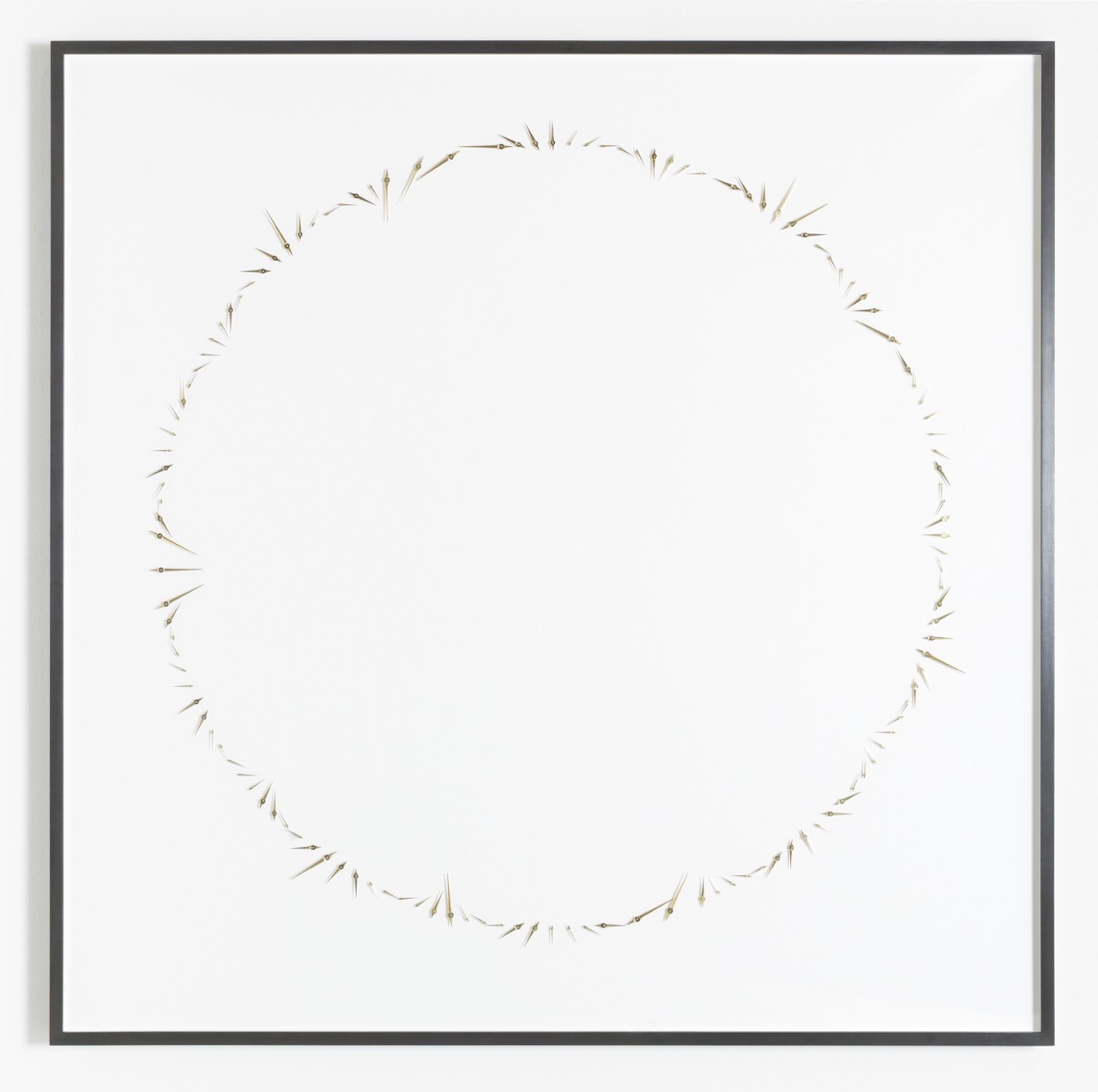 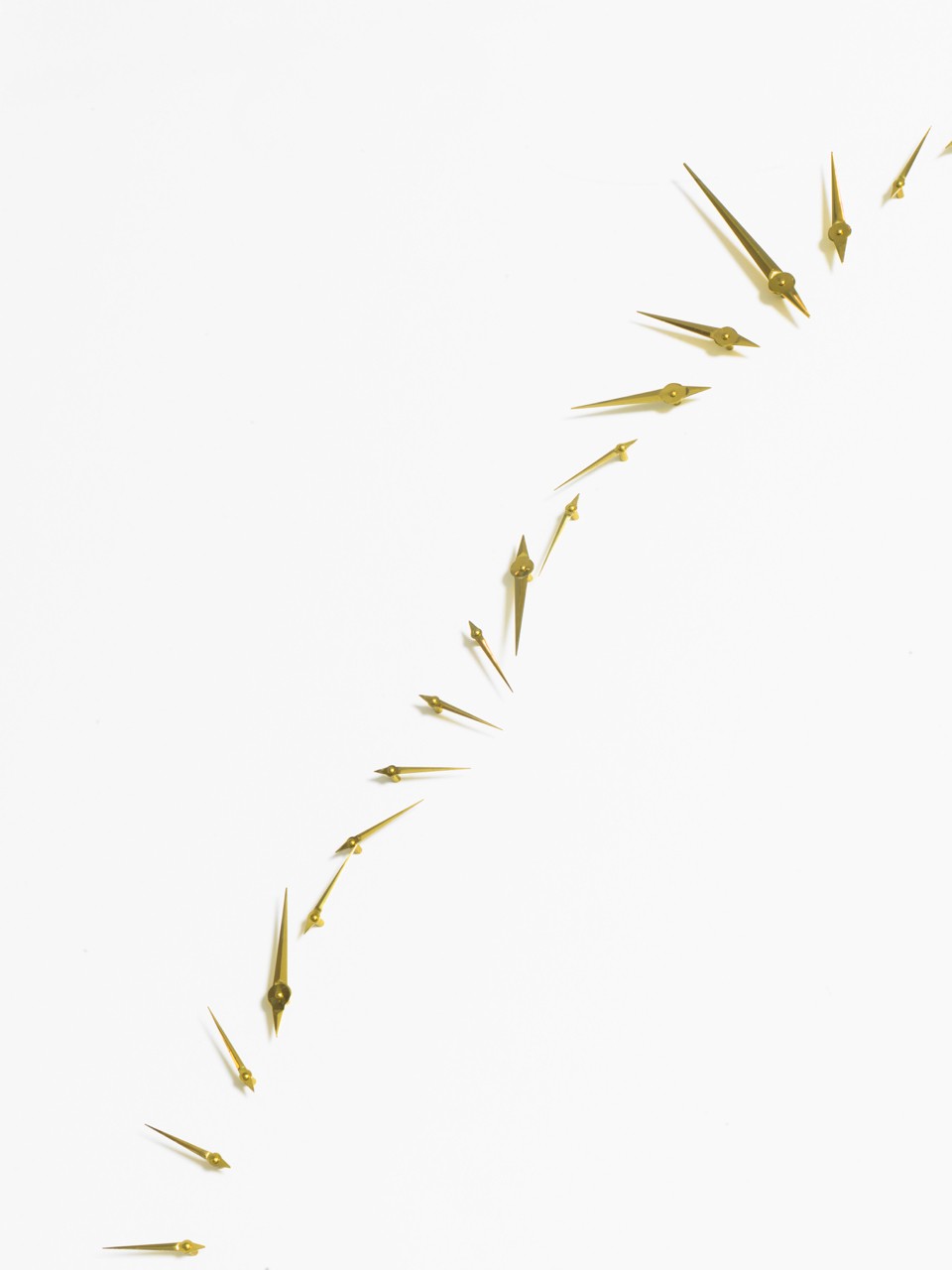 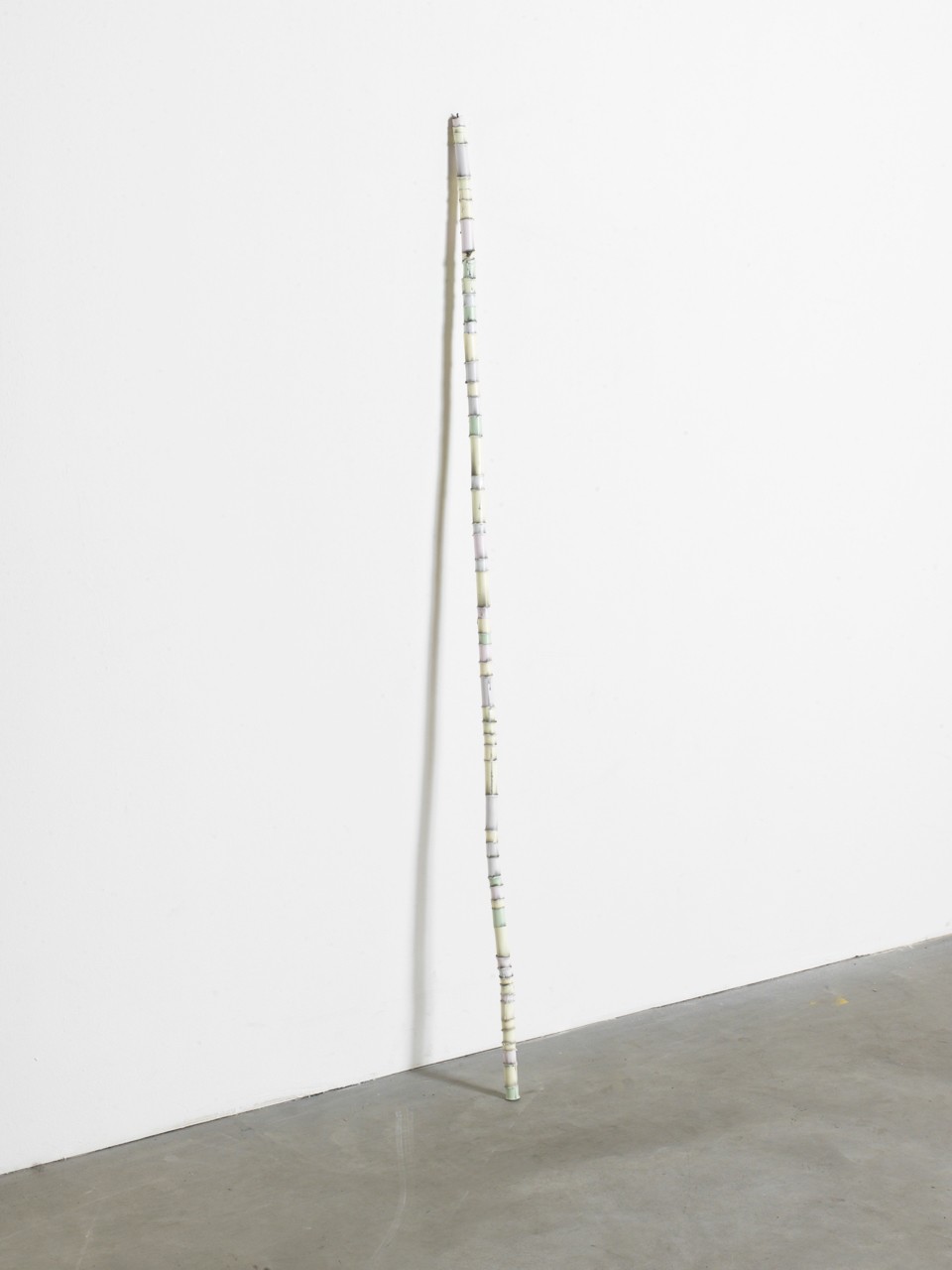 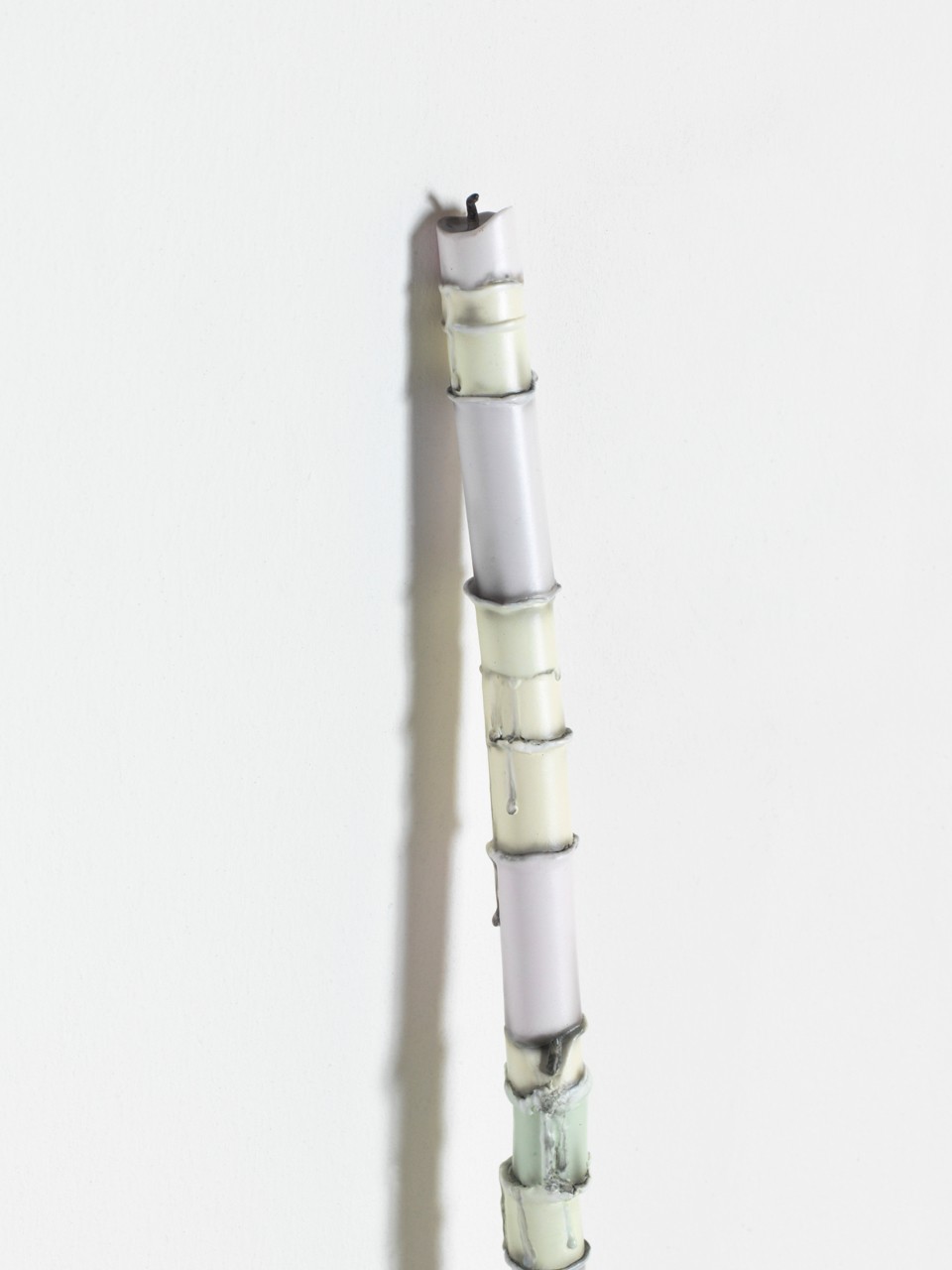 At the centre of the chapel, twelve speakers surround a brass ring lying on the ground. The static installation “NachBild” (2017) is animated solely by the sound; a 2:02 minute-long, twelve-channel piece that plays over and over again. A clear metallic chink rings out, getting faster and faster, before ending in a crescendo of full, deep and prolonged notes. Especially in the former church space, the sound recalls the chiming of bells, but the mass played here is not the traditional one. It reflects recurring themes in the artist’s work: analysing, measuring and making visible abstract laws and units such as time and space.

The twelve speakers already suggest this, arranged in circular fashion and at equal distance from one another like the face of a clock. Their concentric arrangement draws the eye to the brass ring, the protagonist of the installation “NachBild”. The title can be interpreted literally: what you see is the result of something that has already happened, revealed only by the sound. Encircled by twelve microphones, placed exactly where the speakers are now, Kwade let the brass ring spin on its own axis until, after repeatedly resisting the pull of gravity, it finally came to a standstill after exactly 2:02 minutes. Together, the twelve different sound tracks reproduce the physical experience of that circular movement and record it as an acoustic image.

“NachBild” shows how easily human perception is deceived. Contrary to what the title might suggest, what is alluded to here is not the after image produced by light hitting the retina, but the different speeds at which light and sound waves travel – most obvious in nature as thunder and lightning. Whilst lightning can be seen almost immediately, there’s a time lag before the thunder is heard. In “NachBild”, Kwade extracts the thunder that rolls through the chapel in St Agnes as a trace and record of the occurrence. The lightning, however, remains unseen.

This installation seamlessly ties into the “time-state-sculptures” series that Kwade has been developing since 2009. Here, too, Kwade made a stainless steel ring spin like a top on a screened floor. Here, the different stages of its trajectory weren’t recorded by microphones, but by five cameras. The film stills allowed the artist to reproduce the position of the ring at different moments. Each individual sculpture was composed of multiple snapshots from an act that lasted a total of 88 seconds.

Yet, Kwade does not only explore how movement is perceived in time and space in detailed and concrete terms, but also on a larger scale. The emblematic circular form, reminiscent of planets and their orbits and standing for terms like infinity, already alludes to the higher, cosmic relations that play a significant role in her work. The installation “Nach Osten” (2011/2013) with which KÖNIG GALERIE opened its doors to the public at St Agnes in 2013 approaches these dimensions. The artist let a lightbulb swing through the nave of the church at the end of a 14-metre cable. A microphone was attached to the light so that the pendulum's progression was emphasized by a loud hissing sound. The lightbulb swung through the dark room like a comet, tracing the rotation of the earth like a Foucauldian pendulum.

Finally, both “NachBild” and “Nach Osten” reference St Agnes’ former function as a sacred space, demonstrating how sciences like physics and astronomy can encounter religion at very close quarters. They share a common aim, one that Alicja Kwade also pursues in her work: to understand the world.