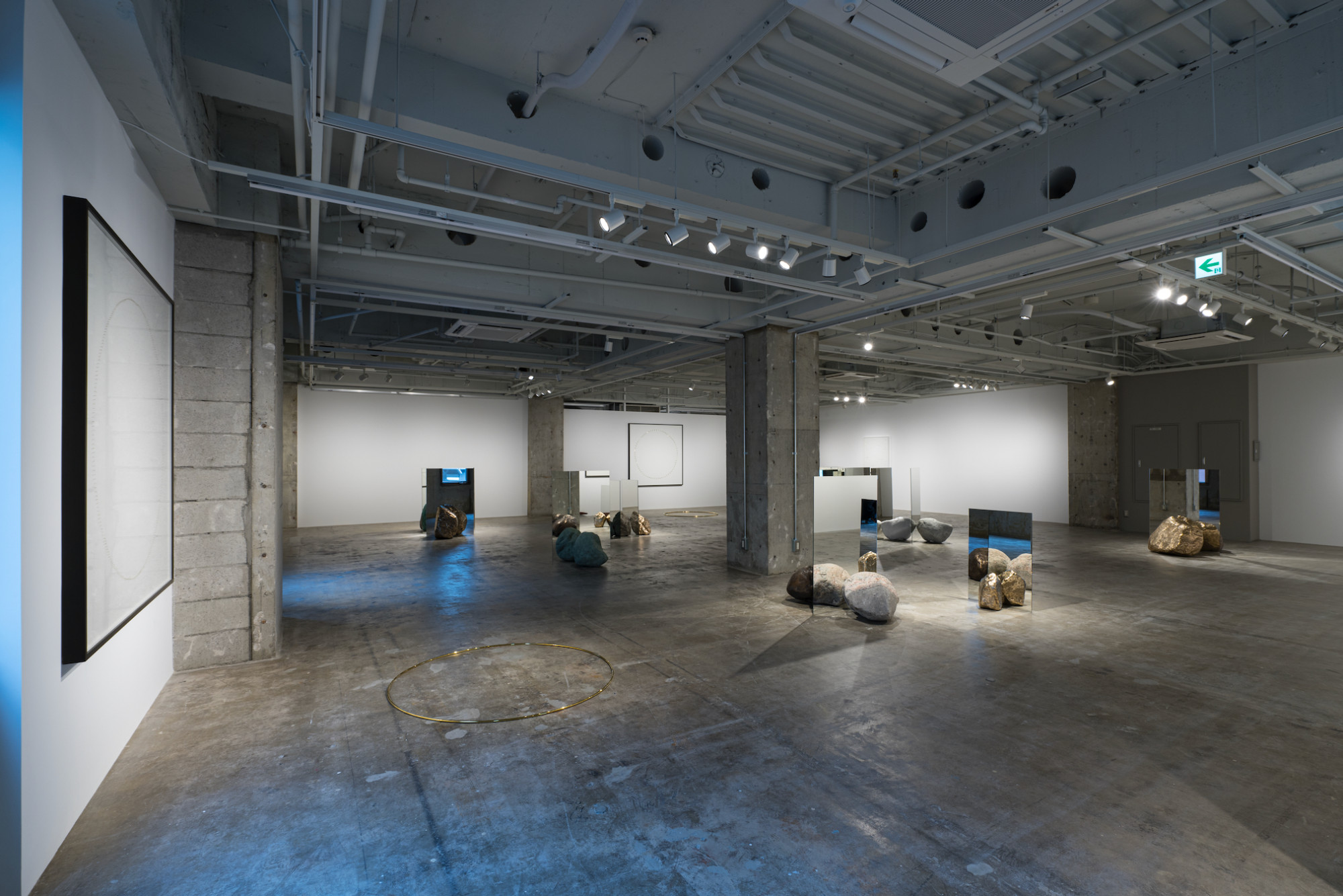 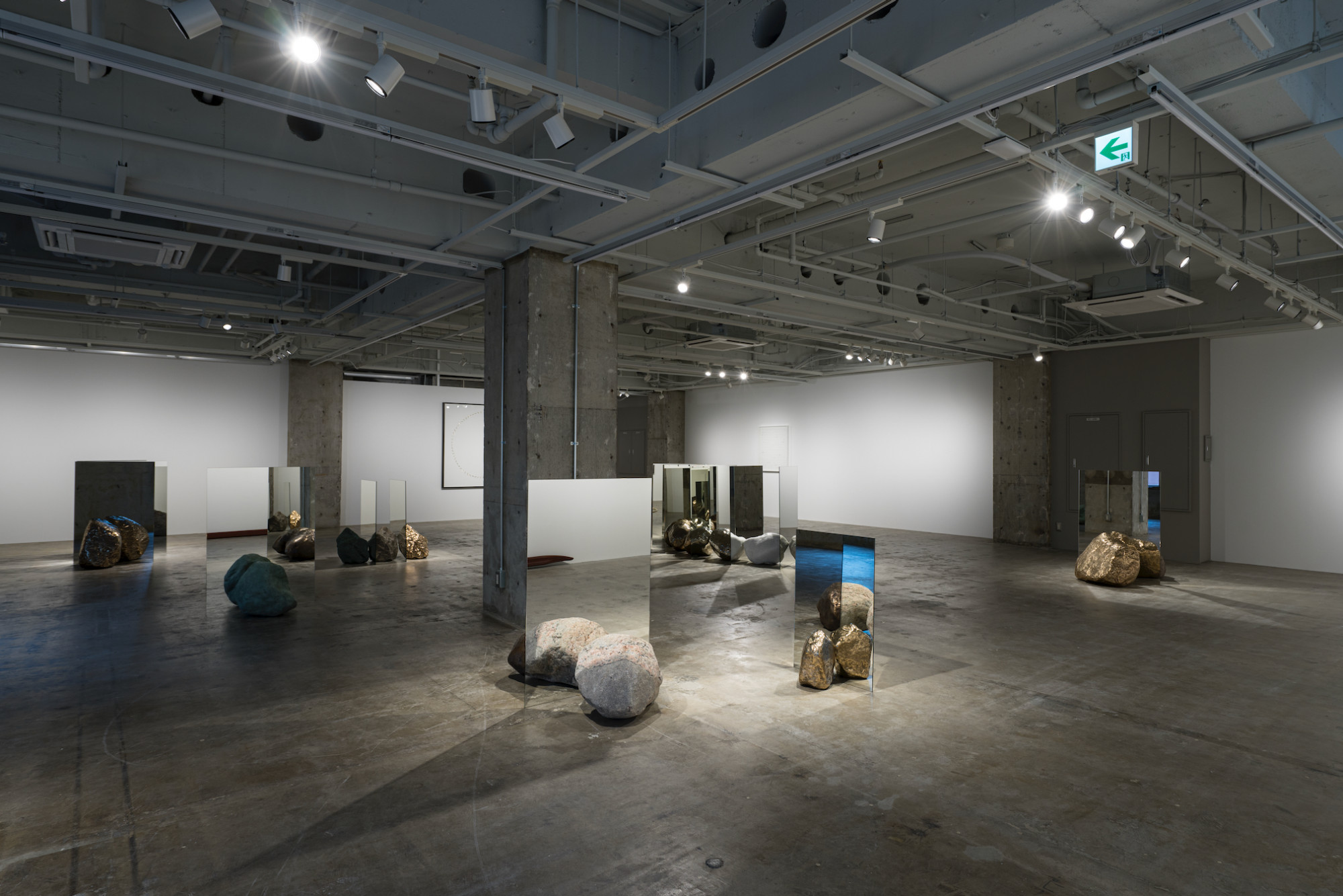 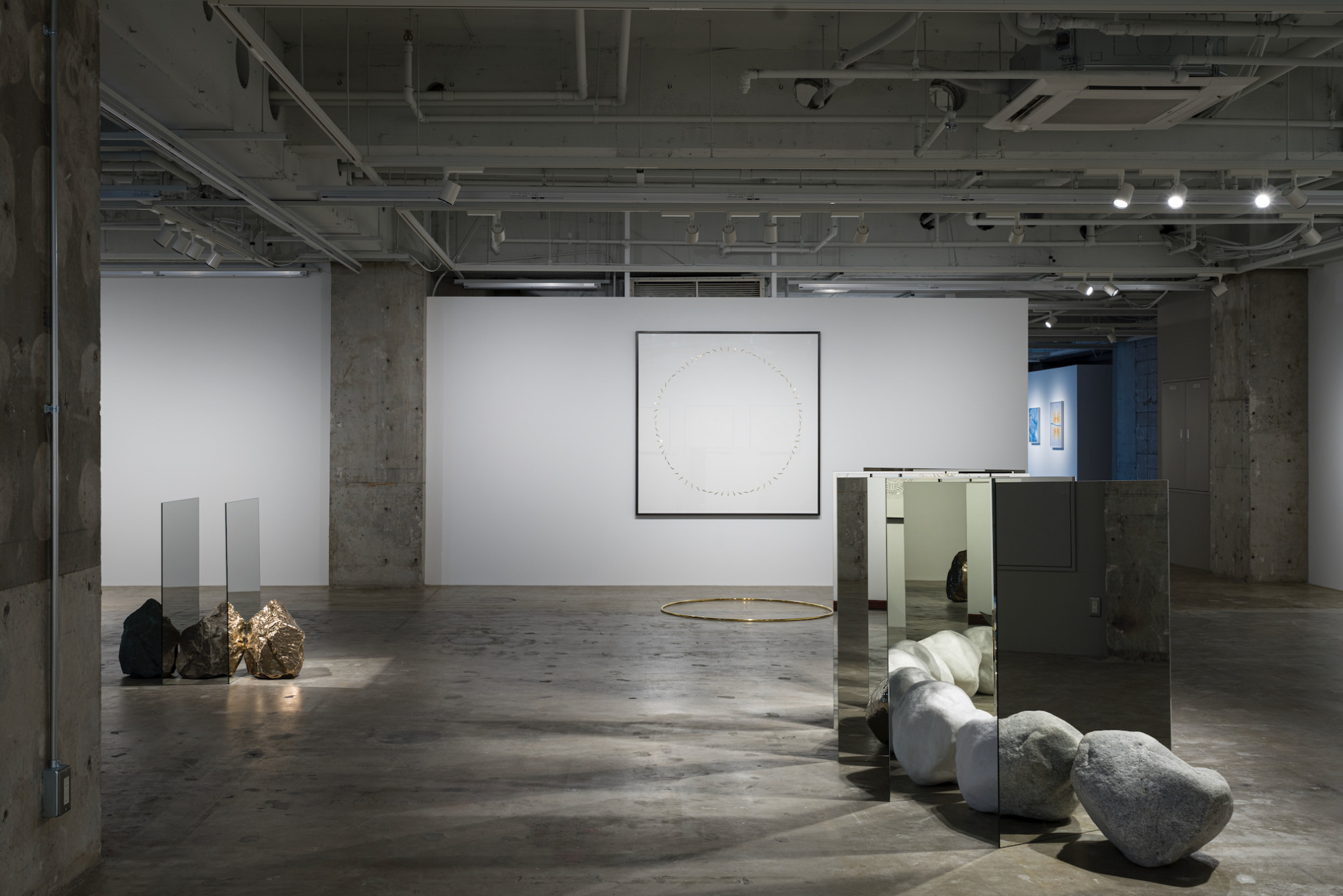 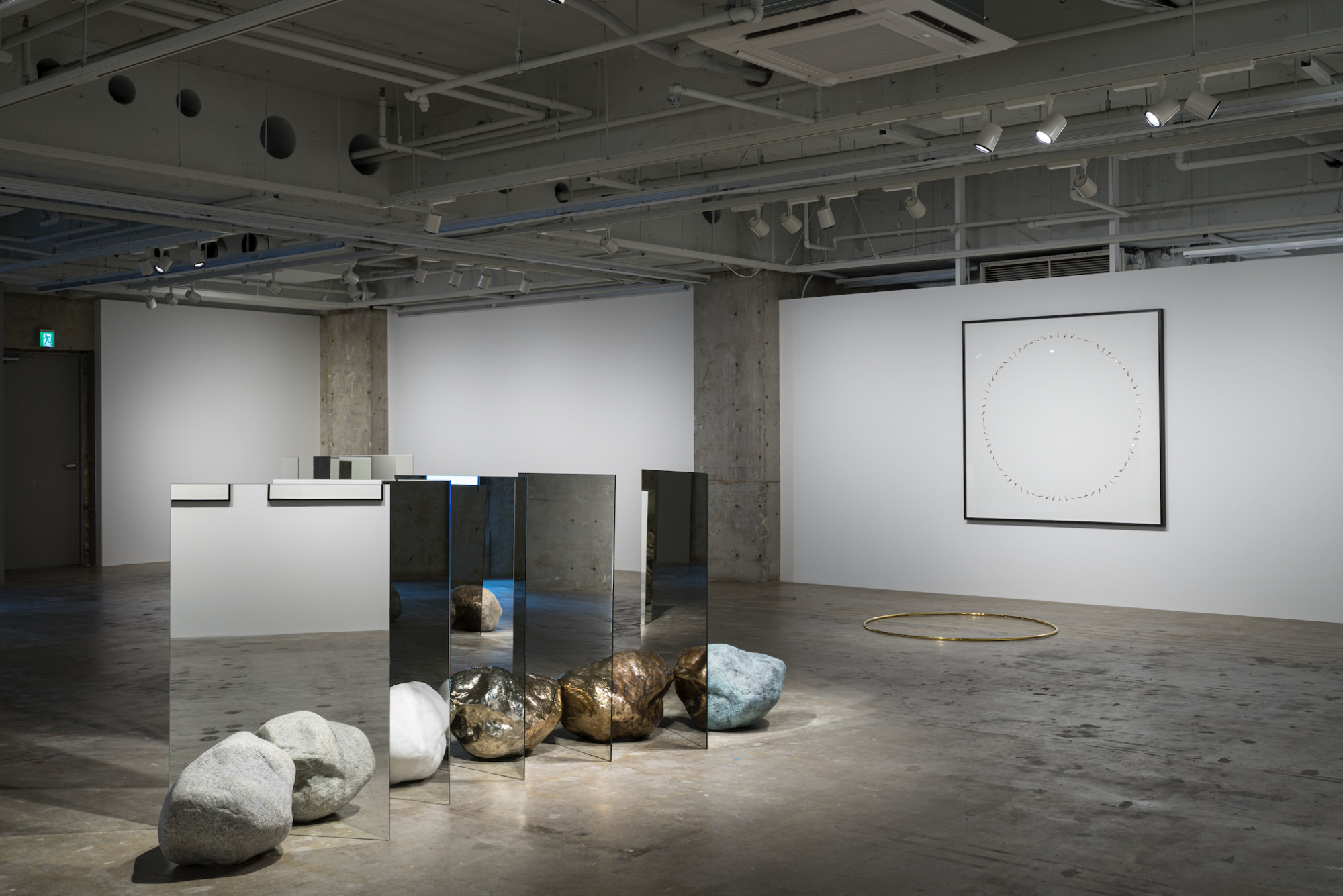 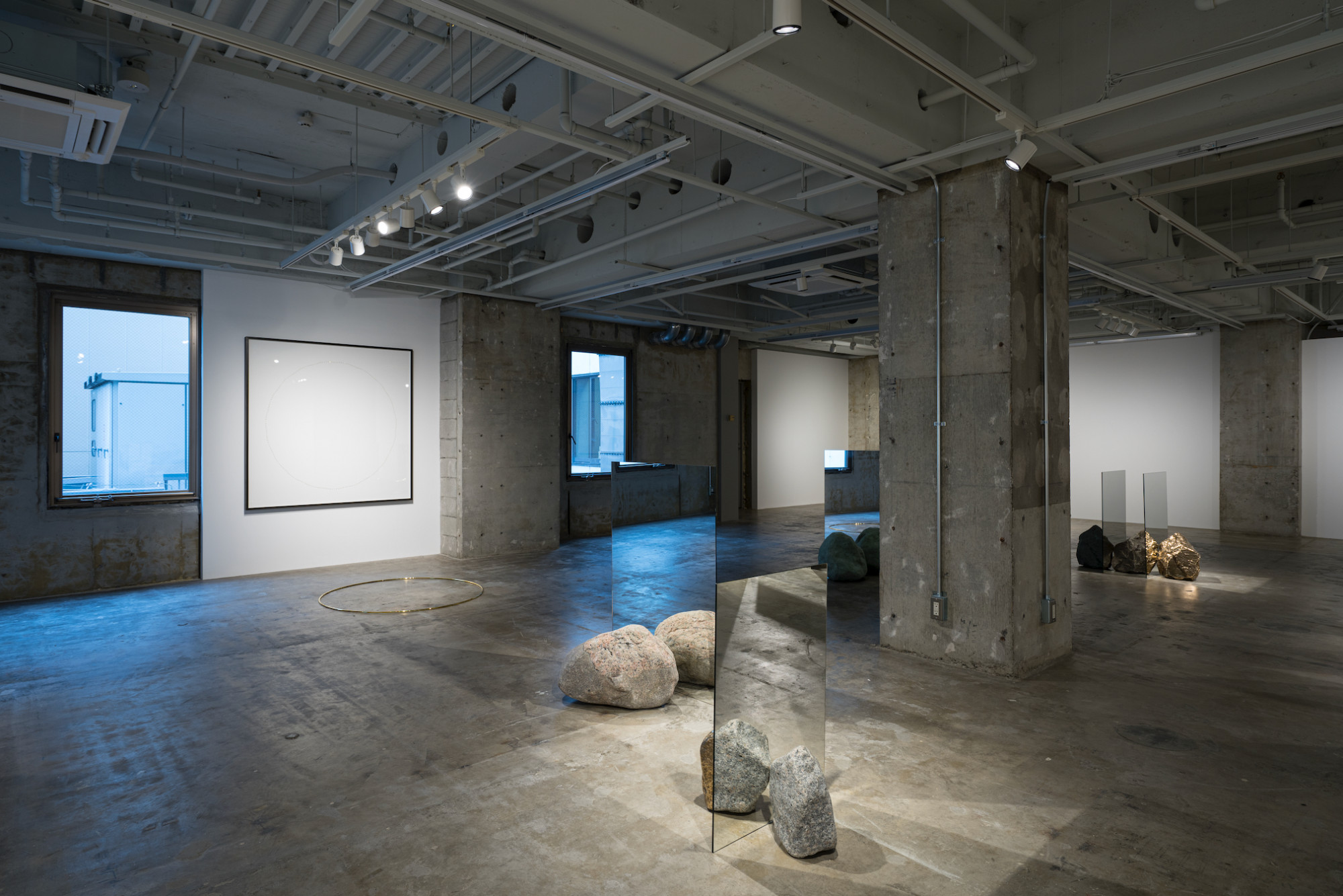 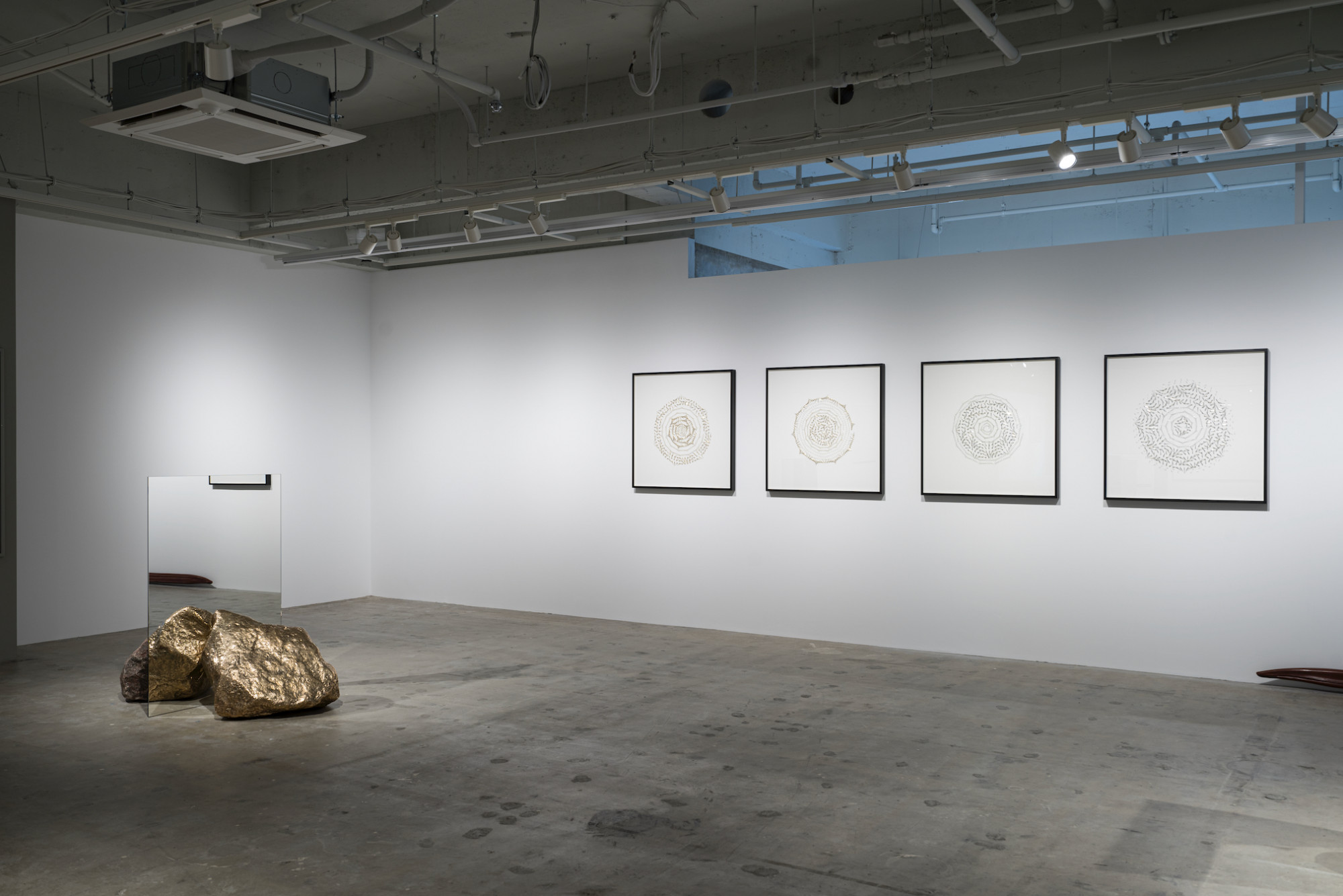 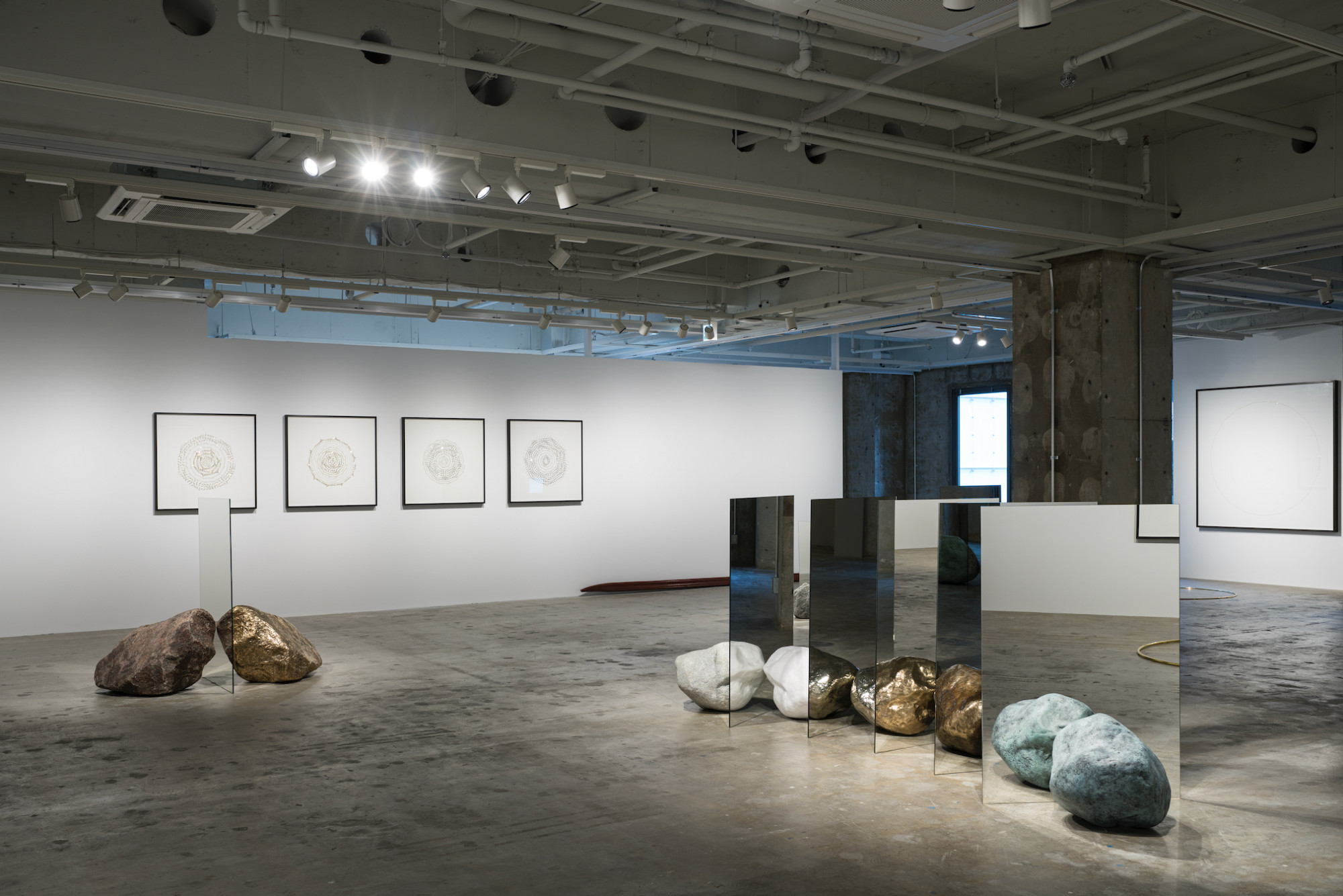 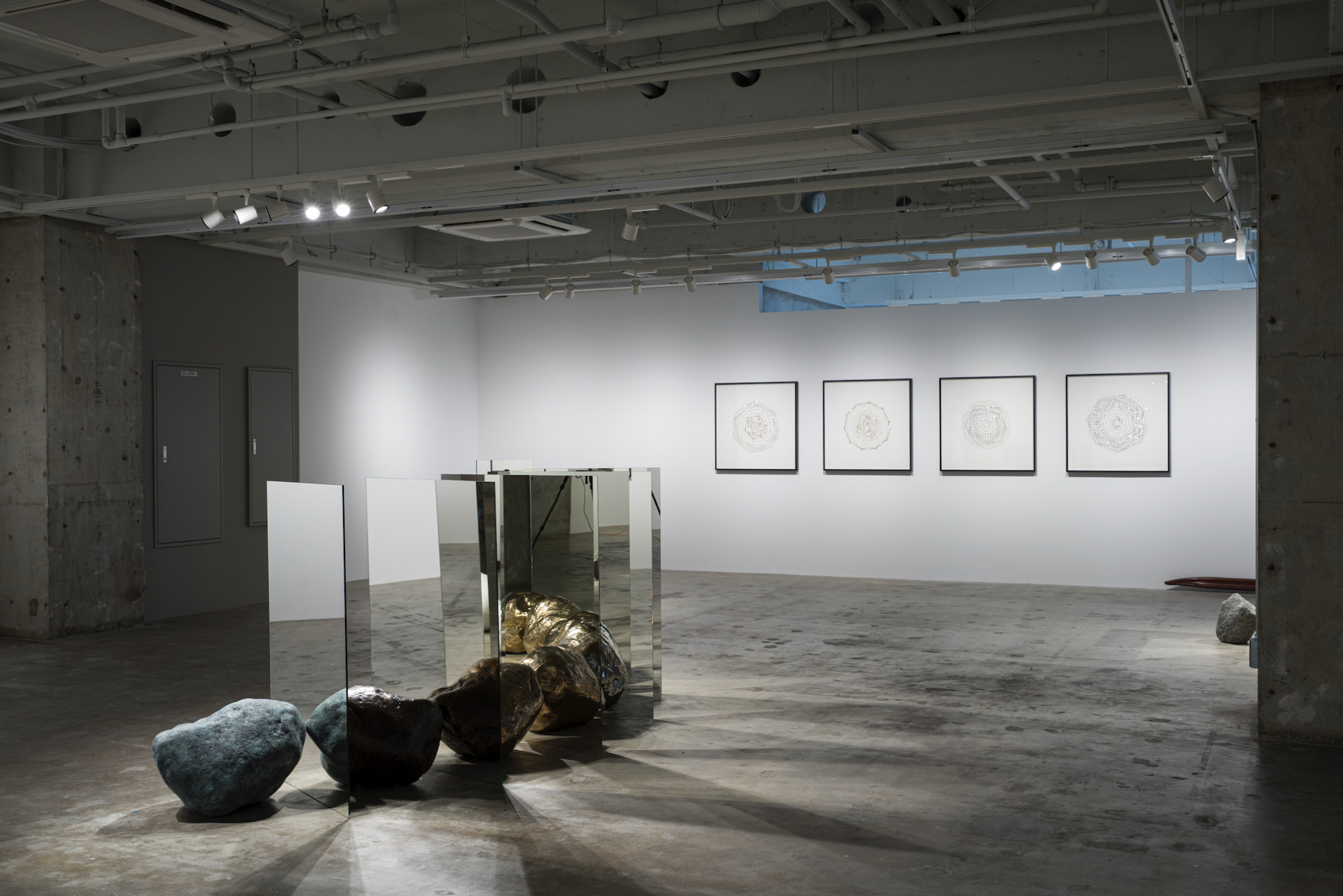 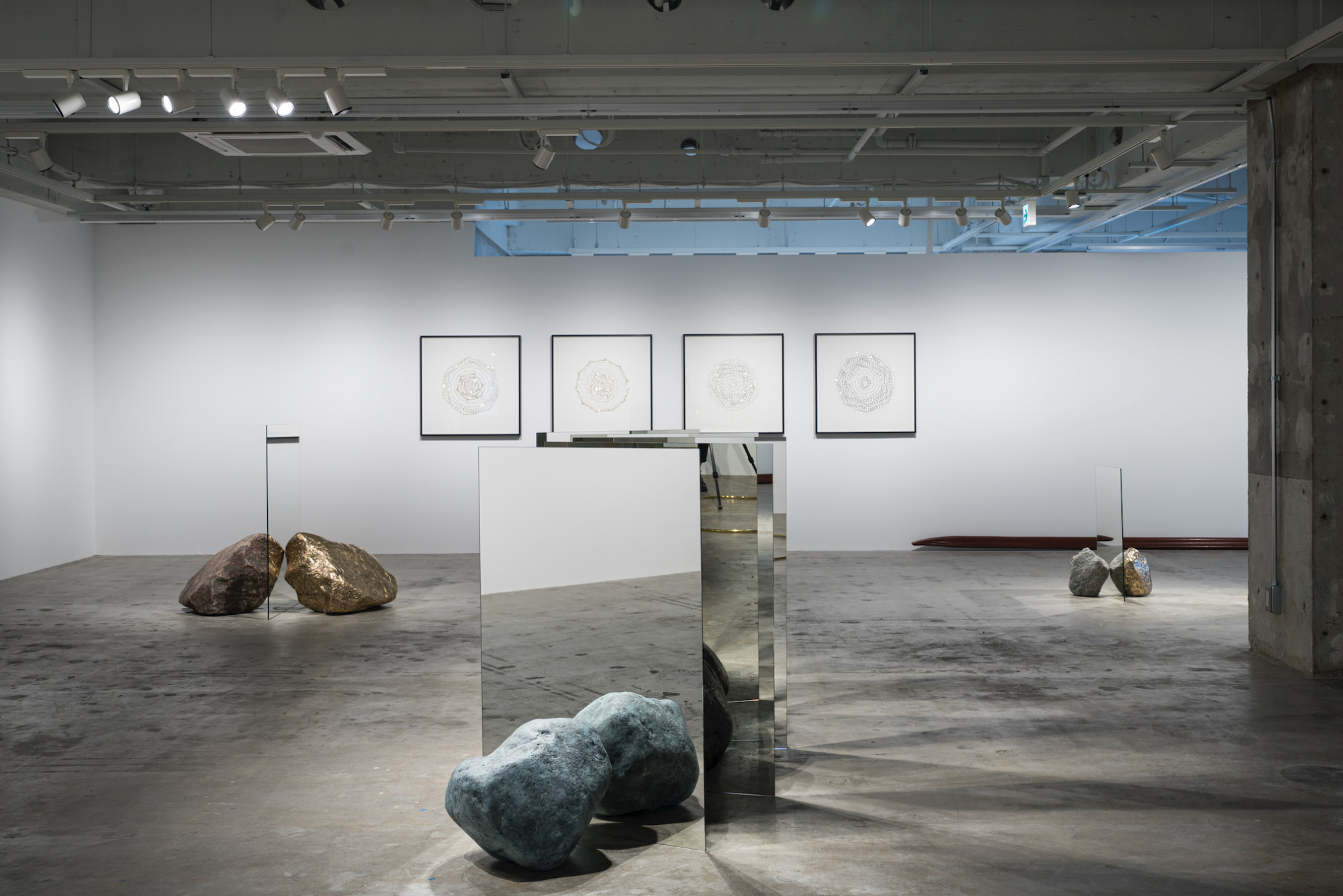 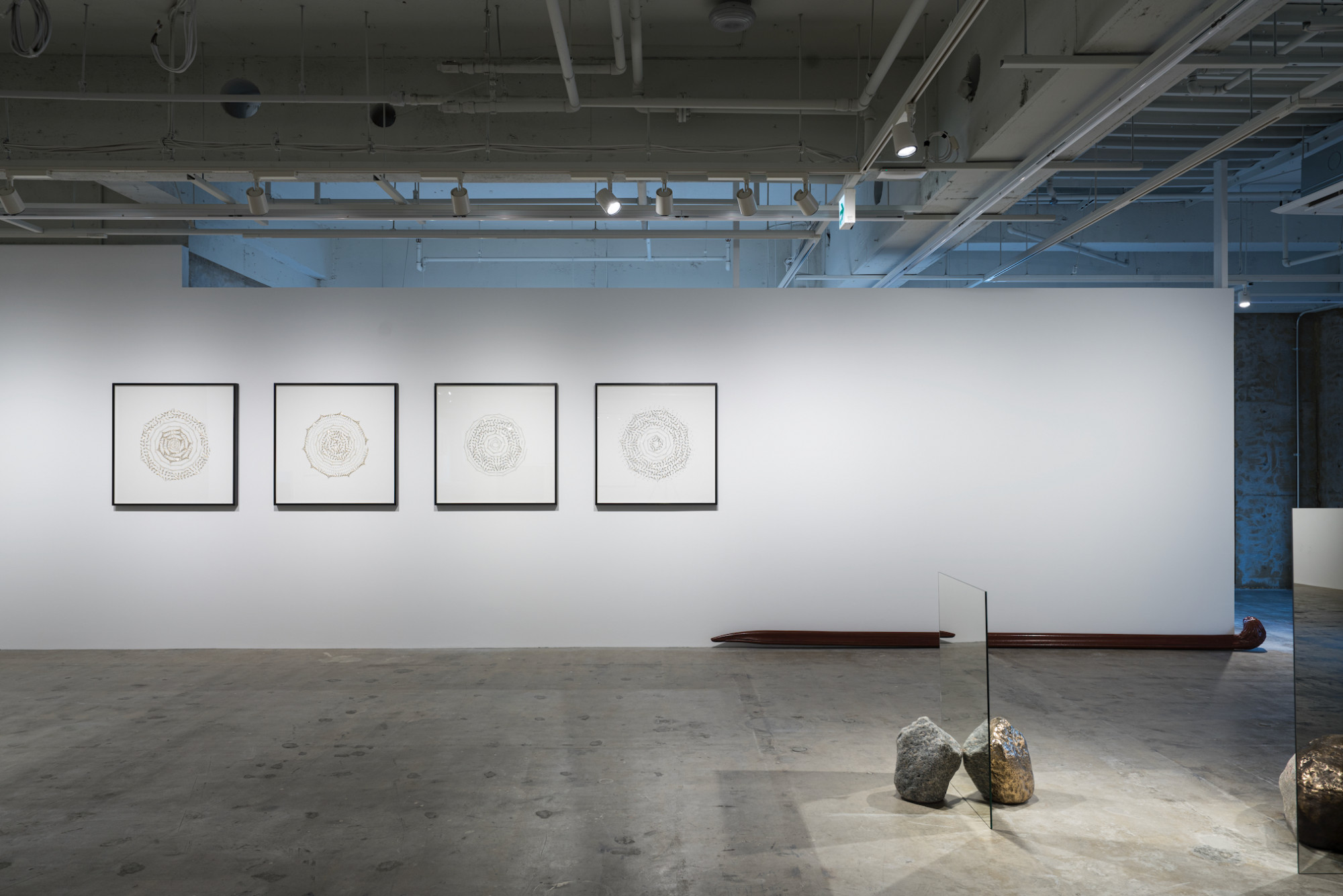 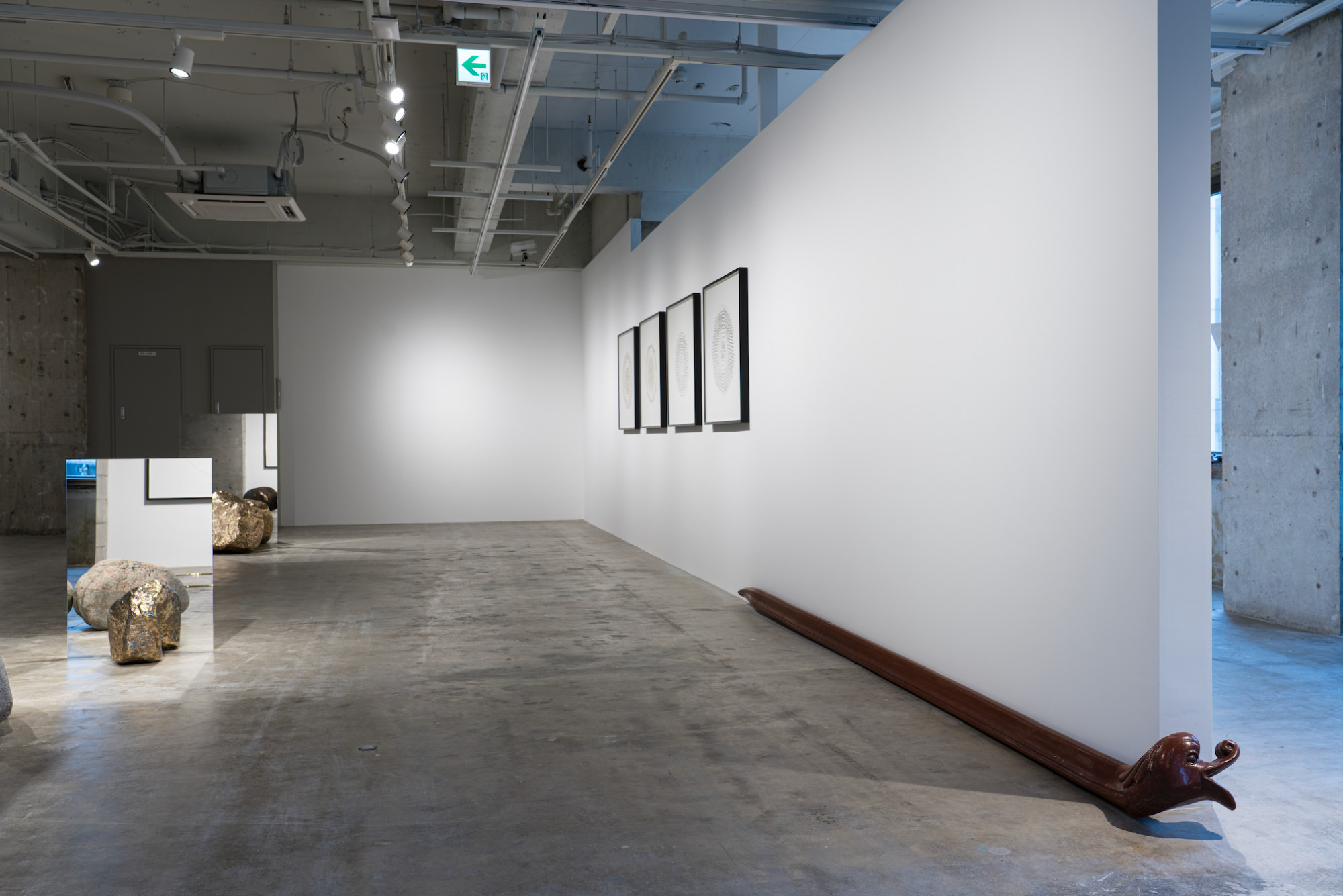 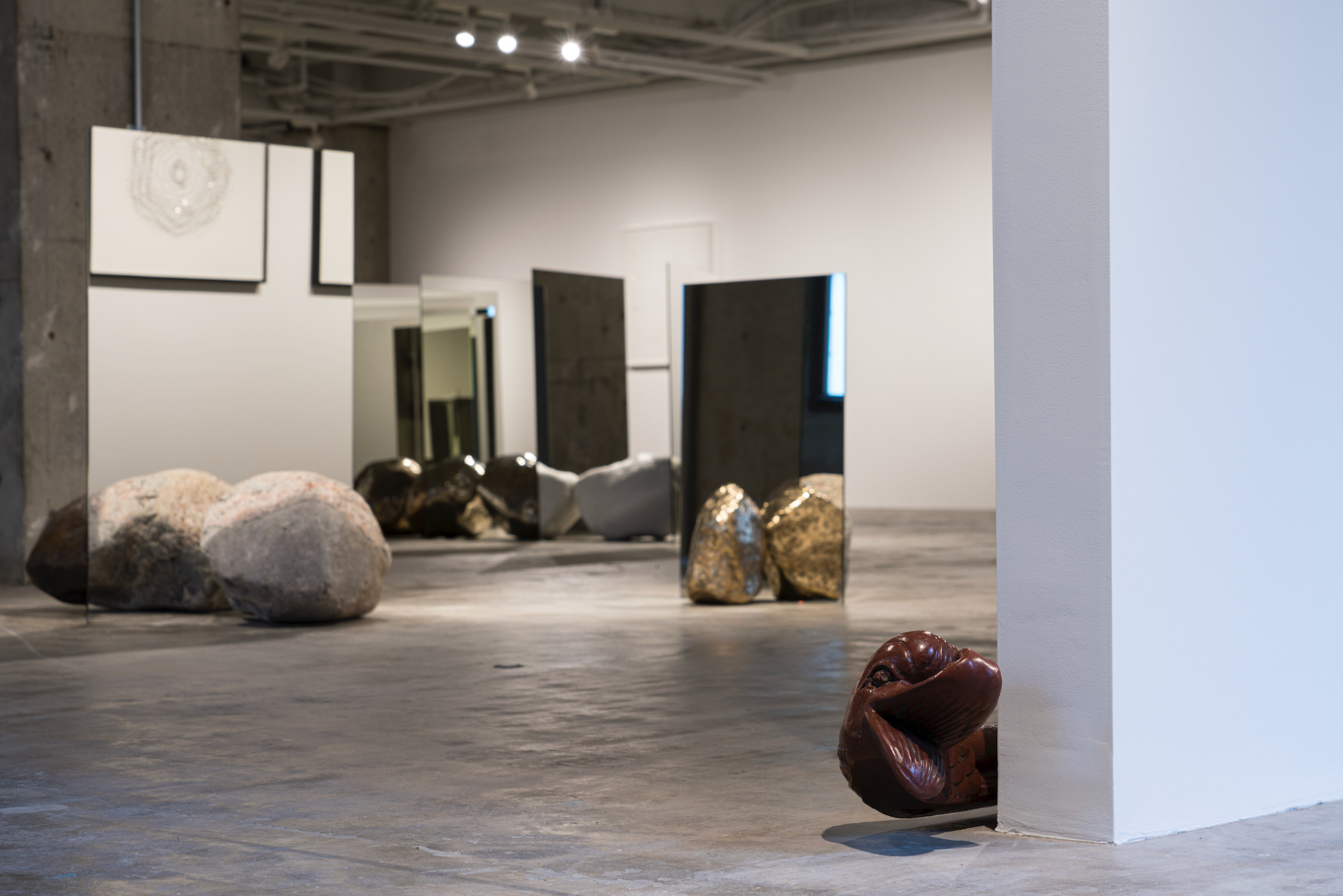 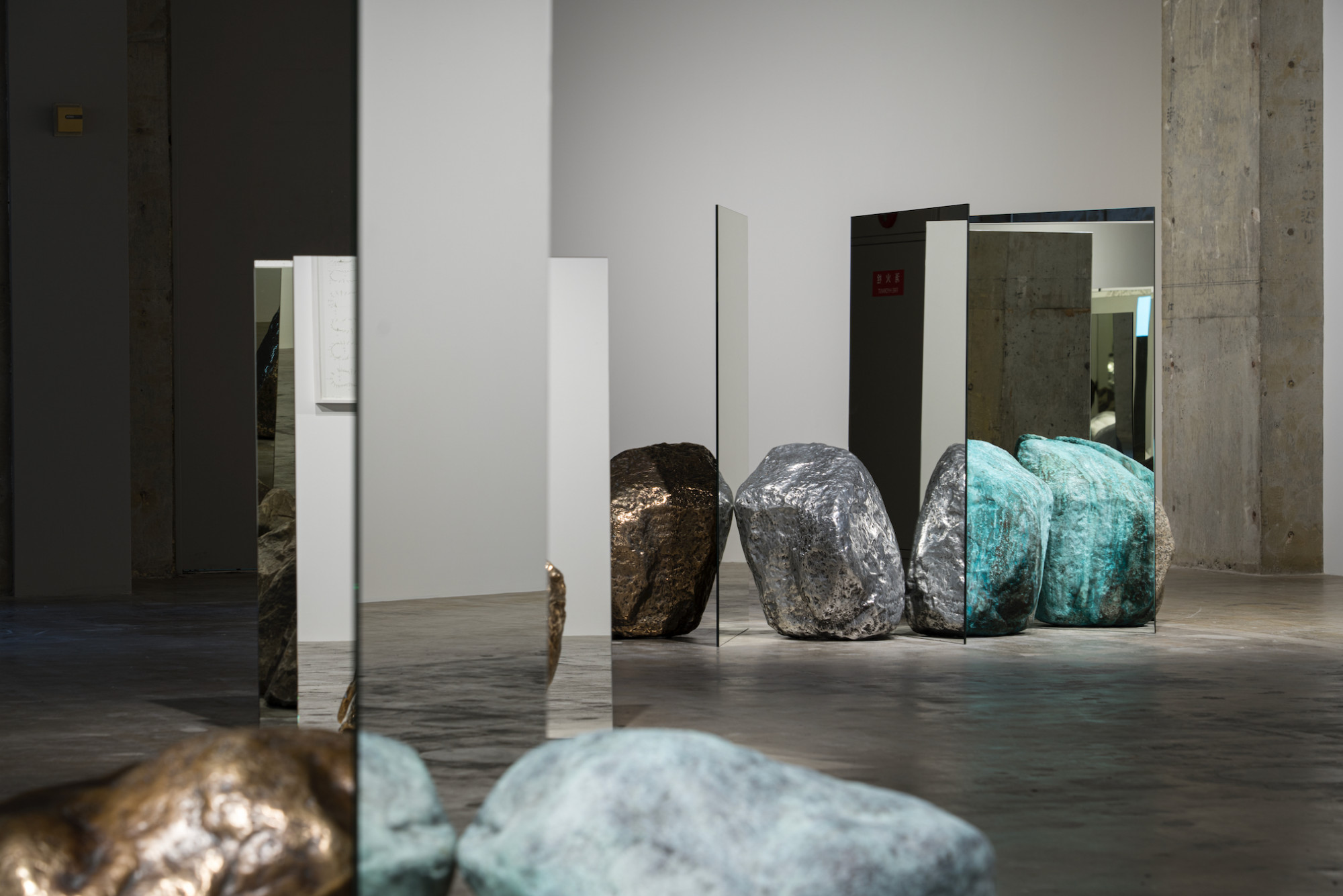 Petrichor, the smell of rain, is a phenomenon we fleetingly perceive. It is created by a process which remains obscured from our senses, caused by raindrops falling on dry soil, in which small air bubbles release aromatic aerosols carrying the unusual scent. But our experience of petrichor is only ever an ephemeral snapshot and reveals the limitations of our own perceptions. It is this moment — which eludes our senses and awareness but still influences and determines our reality — that is the focus of Kwade’s works, which explore not only what is apparent but also the concealed and ultimately the linearity of being.

Kwade attempts to unravel complex systems — in the knowledge that her own position is biased because she herself is an element within them — and to render them in formal representations. The works in the current exhibition are physical representations of various conditions, from spiral to circle to line.

In her Causal Emergences series, Kwade creates a visual experience of this process using clock hands to clearly symbolise the passage of time. Forming a spiral that represents a specific month (April 2021, June 2021, February 2022, March 2022), they produce a pattern that starts at the centre, at midnight, and radiates out towards the edges of the picture. It references Descartes’ logarithmic spiral, in which the distance to the pole changes by the same with every rotation. A form of natural expansion, the spiral can be found everywhere in nature, from snail shells to low pressure weather systems. The size of the circle it creates is different in each image, the diameter being determined by the distance between the Earth and the moon in that particular month. The artist’s reference to these natural forms opens up diverse patterns of interpretation and calls into question established and socially coded readings.

Works such as 9days 23hours, or 2days 23hours are even more specific in their representation of measurement systems, such as time and metrics. Here, the artist creates a new system of reference between the two units by means of a brass ring and the hands of pocket watches. A fixed section represents a specific timeframe. This interweaving of time, space and object ultimately defines the “amount” of time and offers an alternative calculation of the area of a circle. The artist’s choice of the circle is deliberate, given its symbolism as an eternal object and the perfect geometrical form. With Kwade, the dilemma of partiality becomes a means of reception, in which the observer inevitably becomes an integral part of the manmade system, closing the circle.

In Uroboros, Kwade dissolves the spiral or circularity even further. The Uroboros is an ancient Egyptian symbolic image of a snake that forms a circle by swallowing its own tail. It is often perceived as a symbol of infinity and eternity, as a sign that time is not linear but cyclical. Rather than being a representation of a snake, Kwade’s version is a found handrail like the ones that can still be seen in old buildings today.

Kwade’s Be-Hide sculptures are a continuation of her exploration on the question of “being”. A found natural stone is replicated several times over in different materials. The replicas are each separated by a mirror. In Kwade’s works, mirrors open up the vistas into seemingly endless parallel worlds, into theoretical multiple existences of the same object in different circumstances. The mirror serves merely as a tool for transforming real-world objects, and simultaneously reproducing and remodelling them as though in a prism. For the work to achieve its effect, the observer must move around it and constantly change perspective, questioning their own perception.