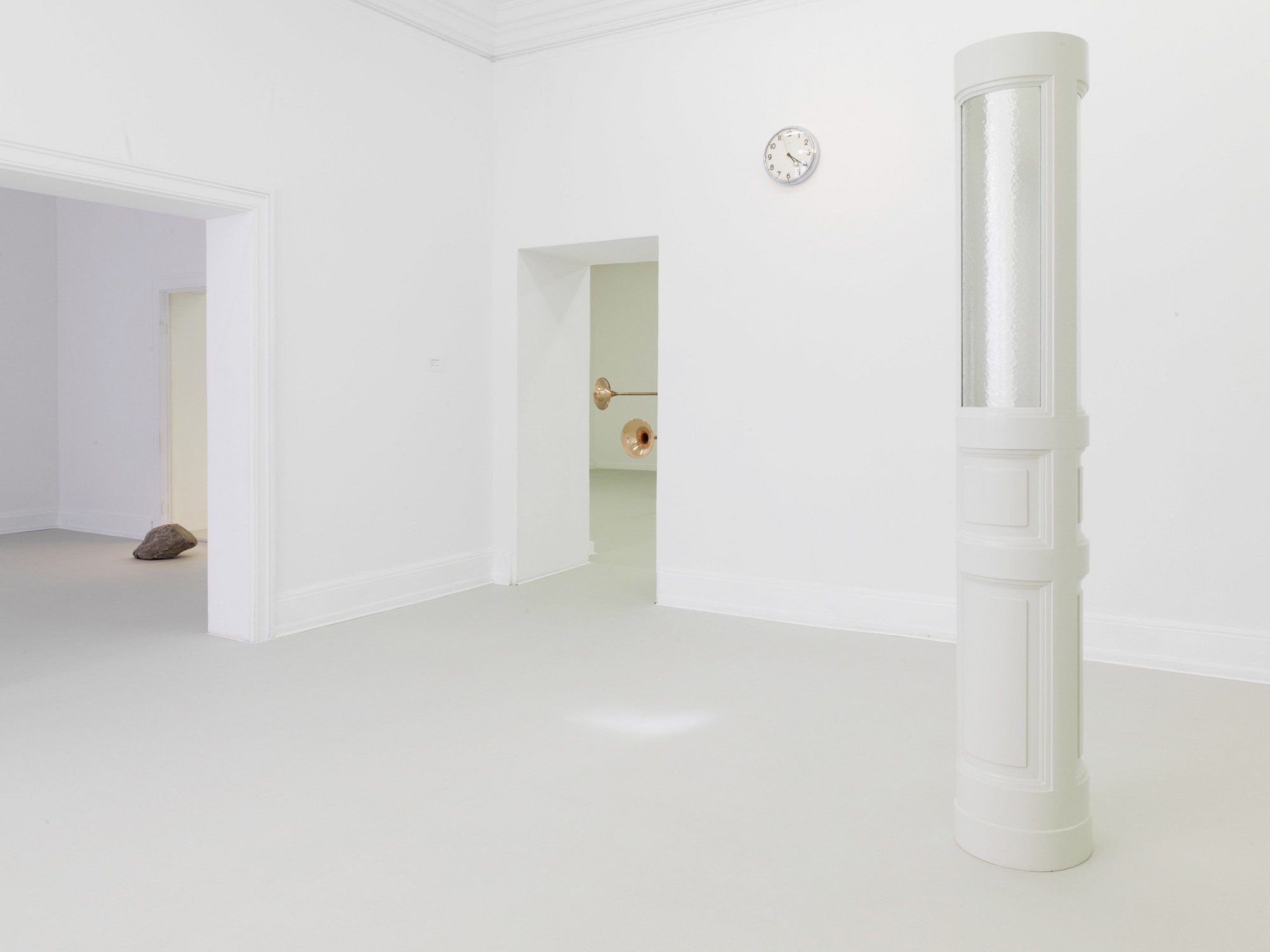 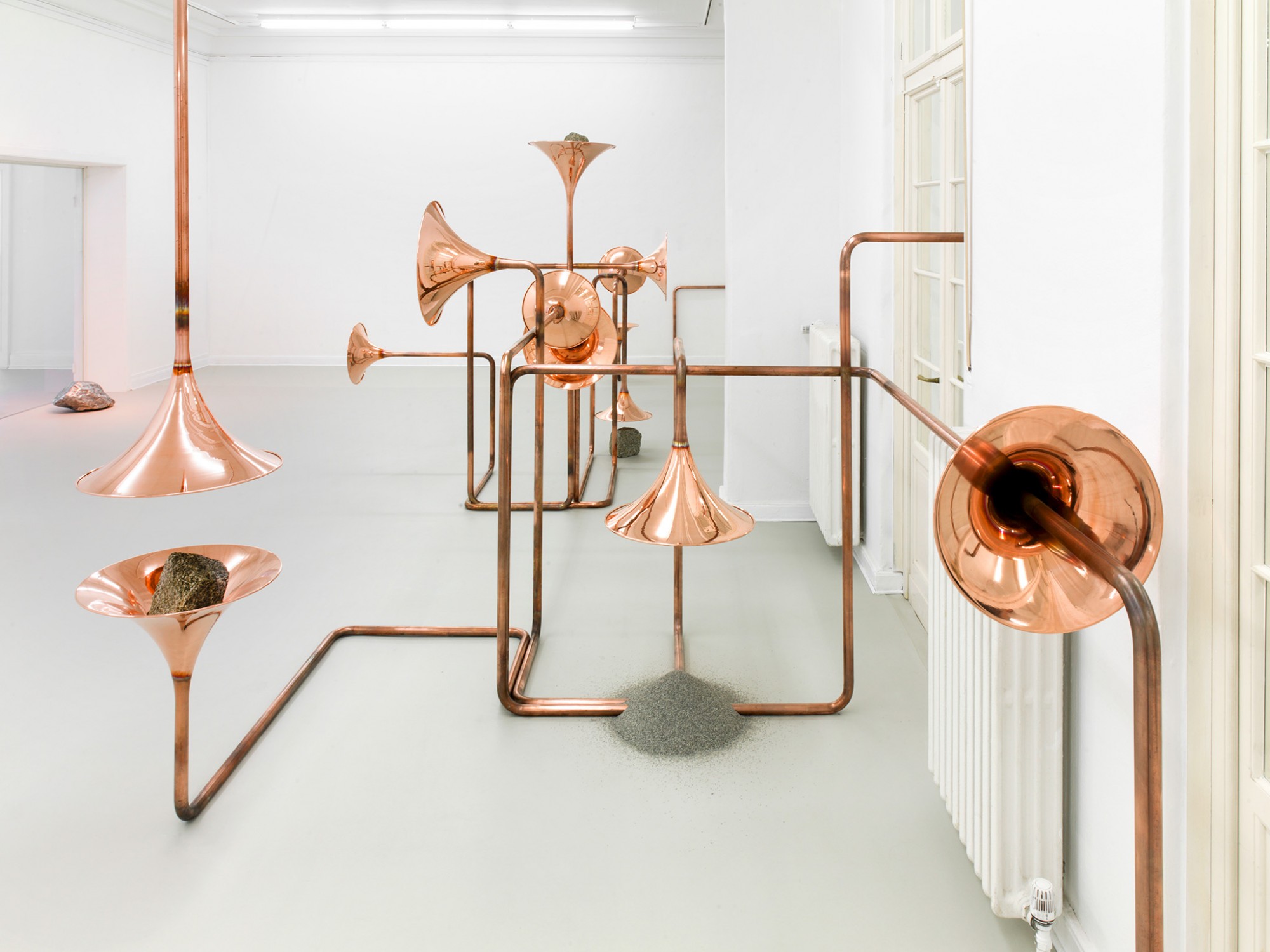 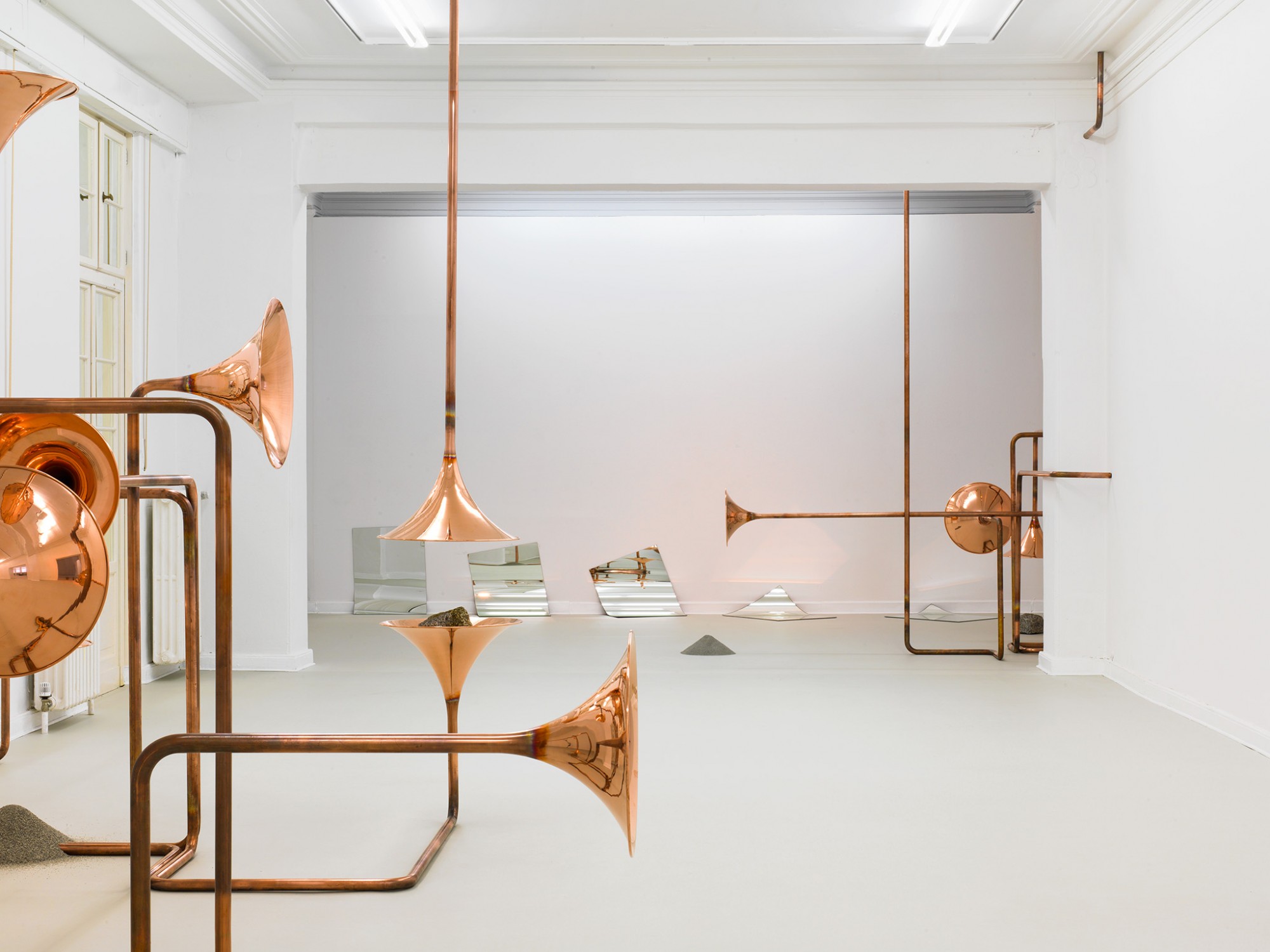 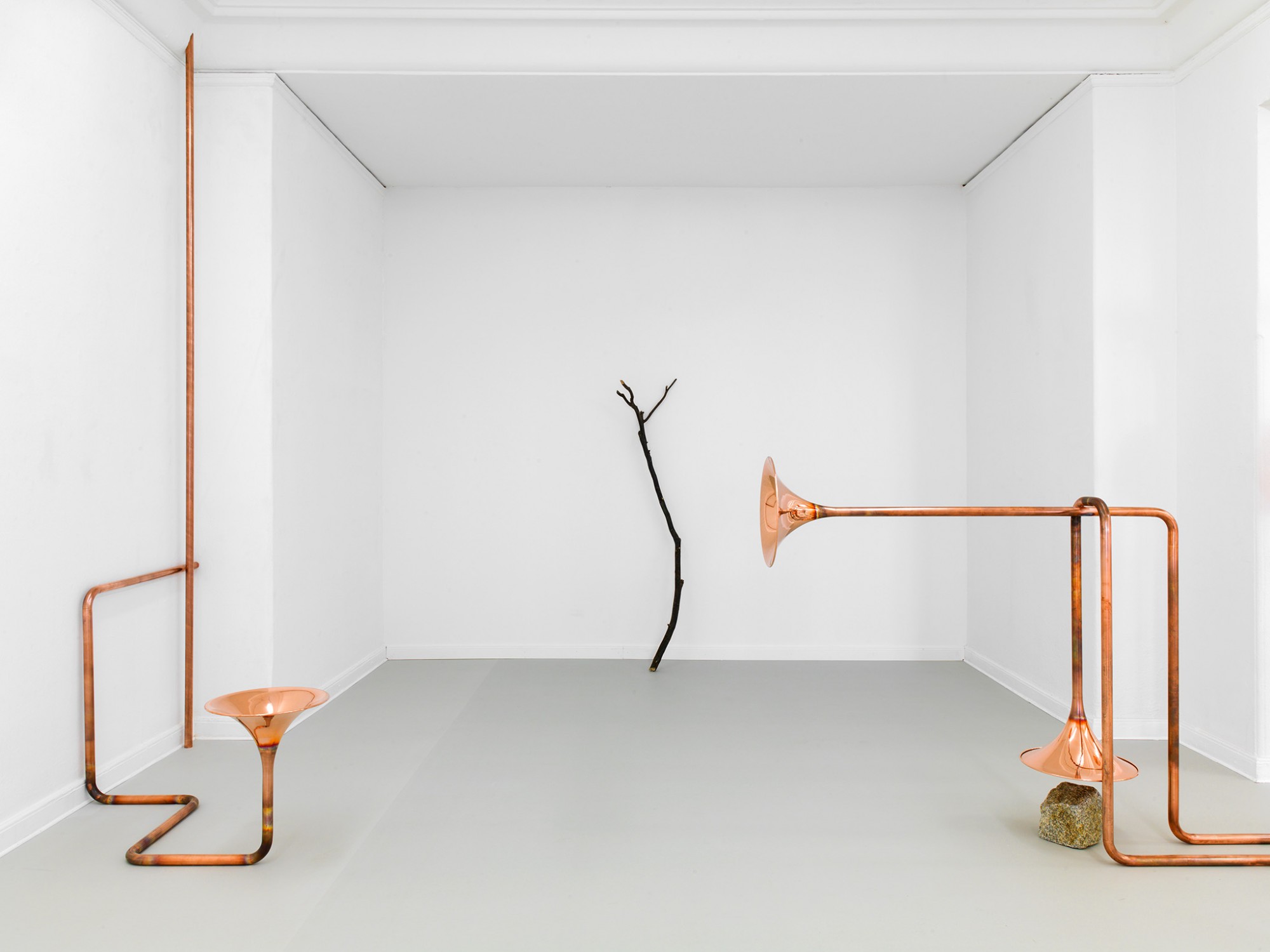 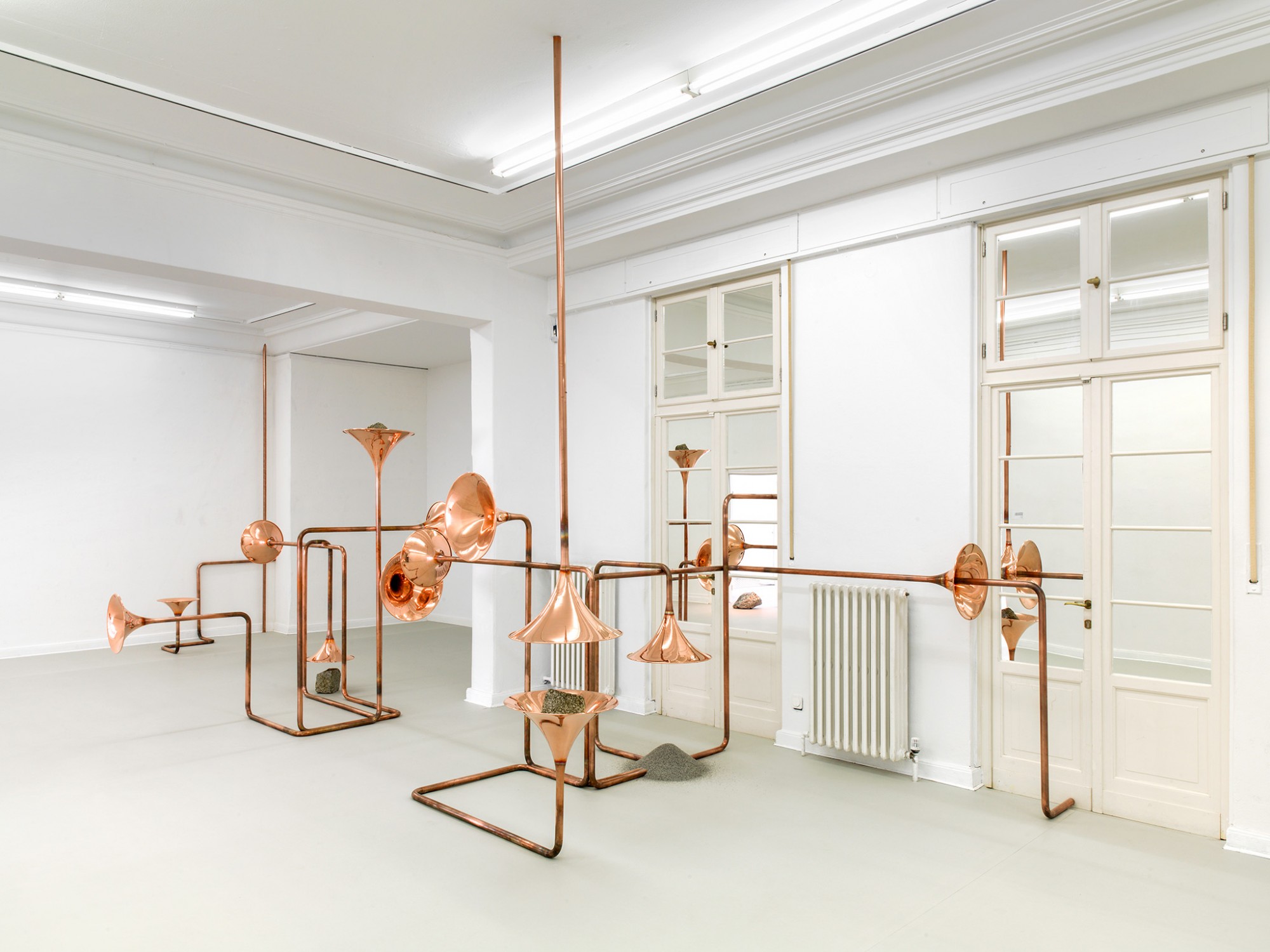 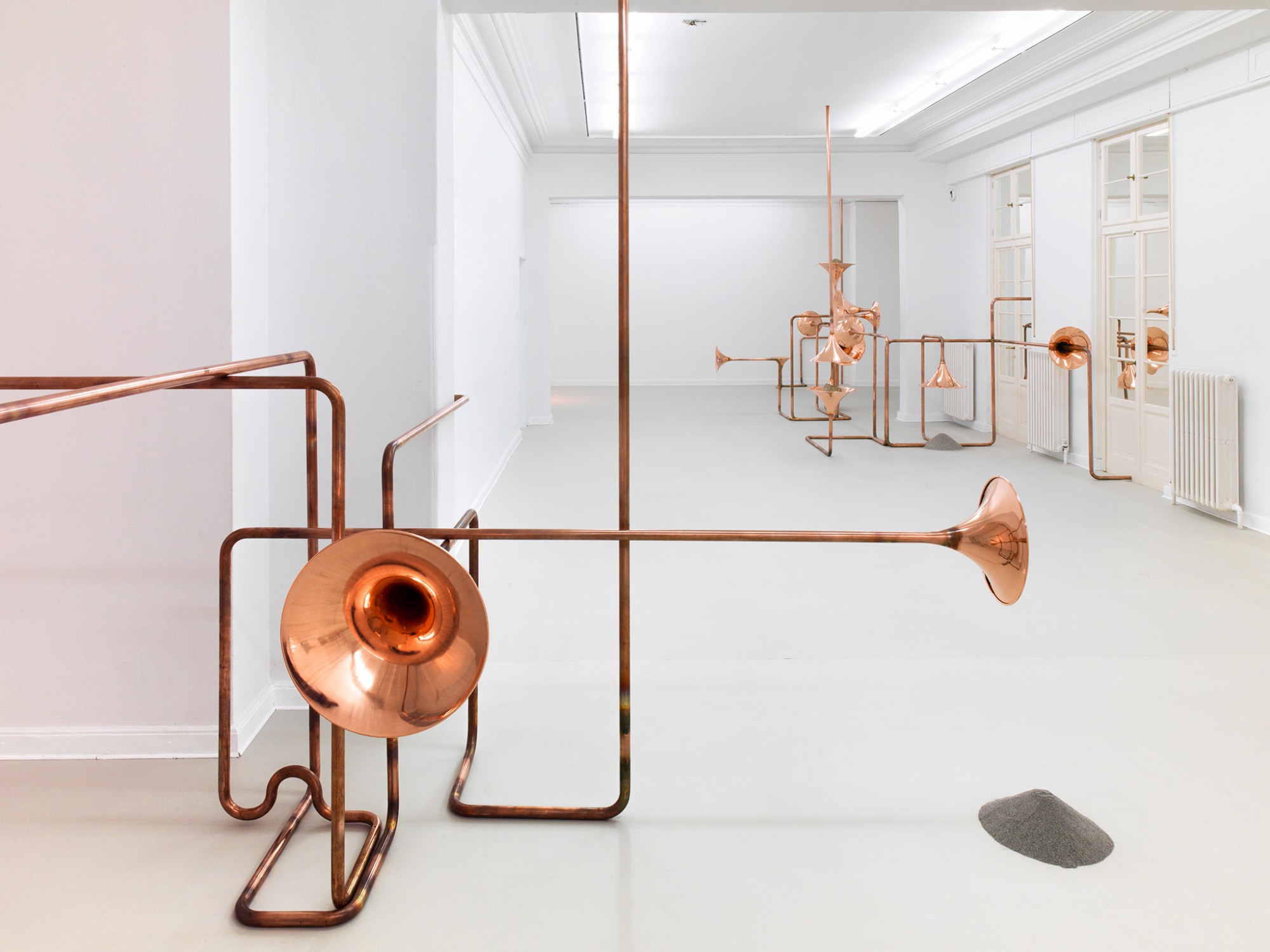 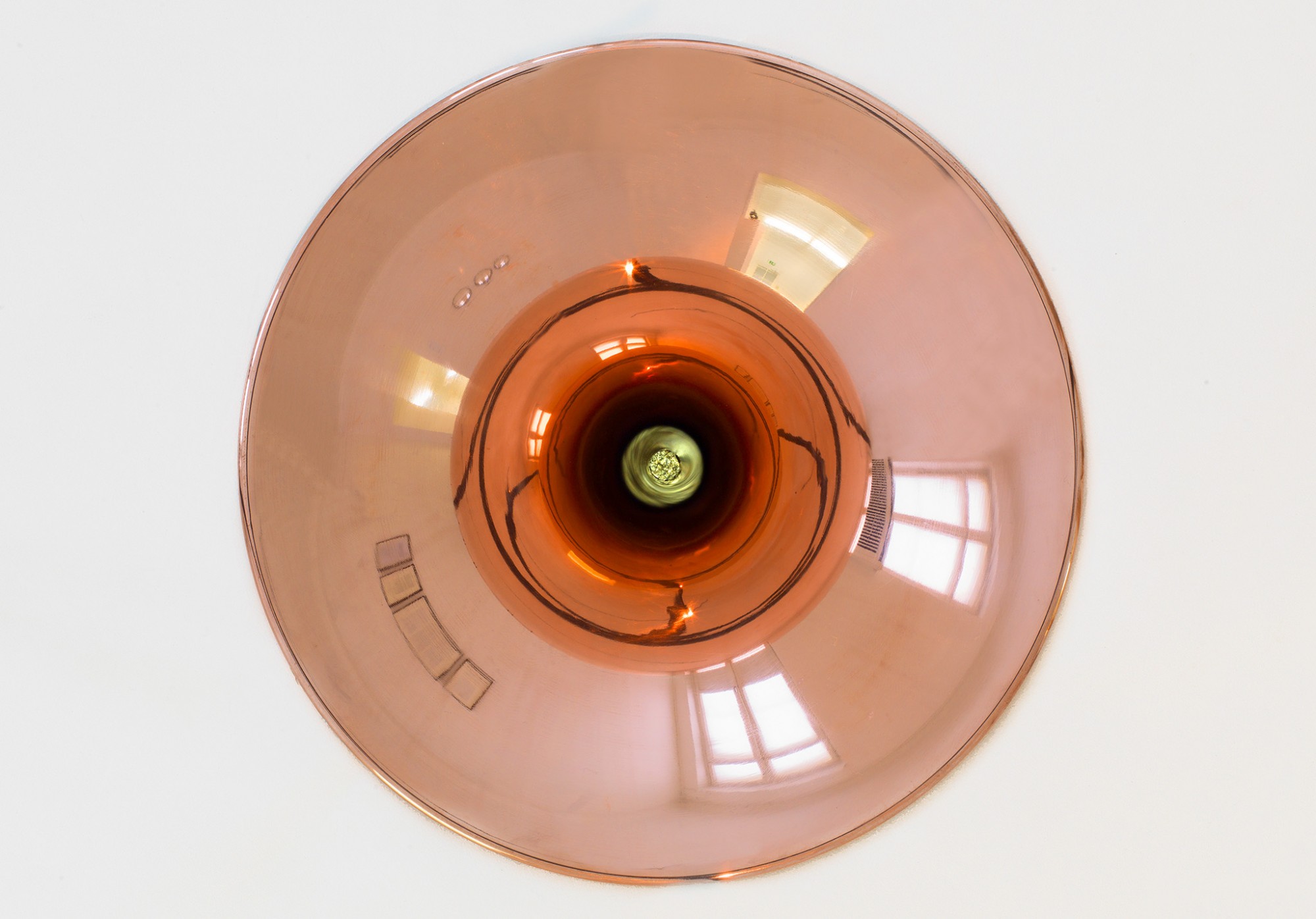 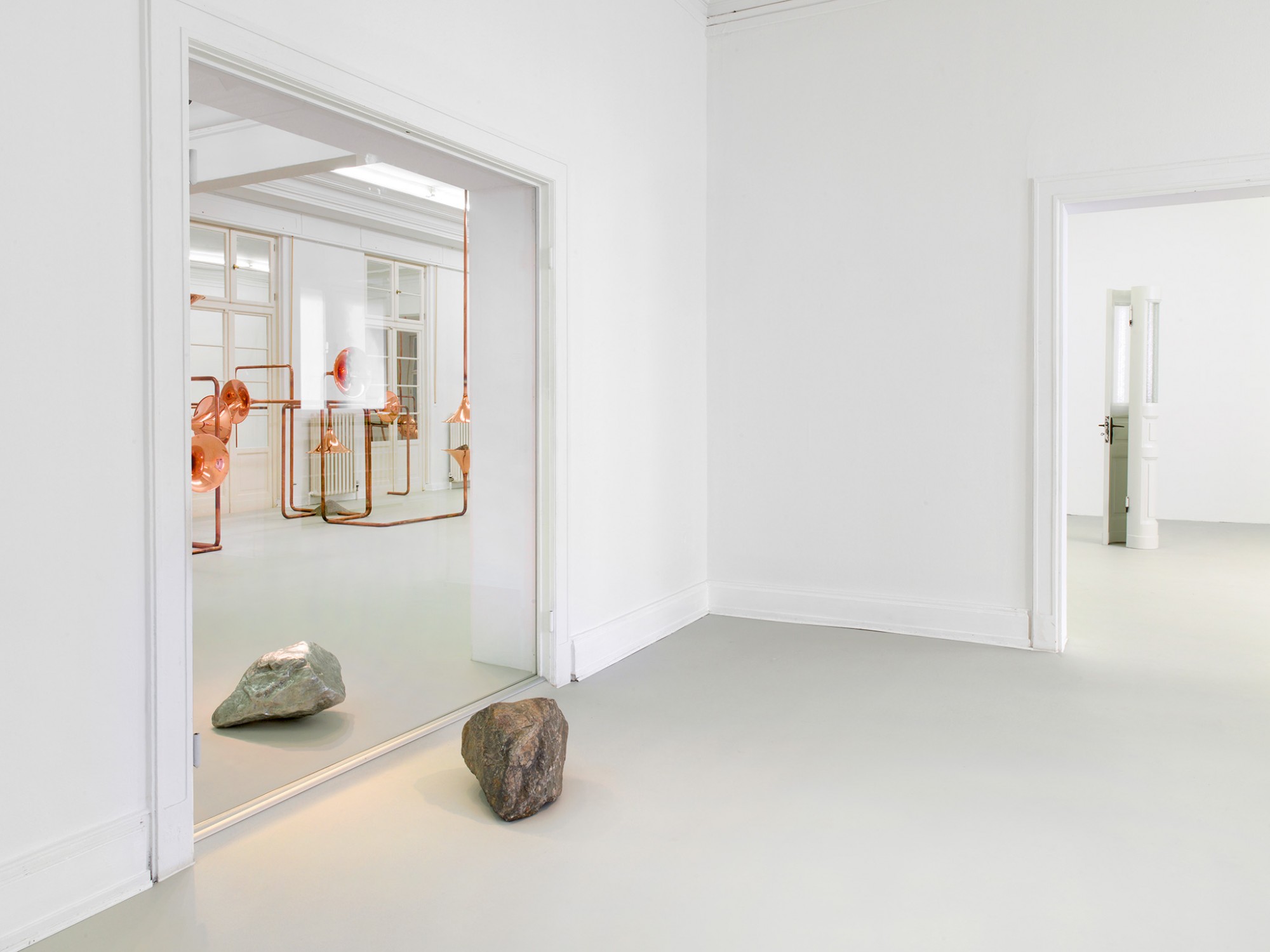 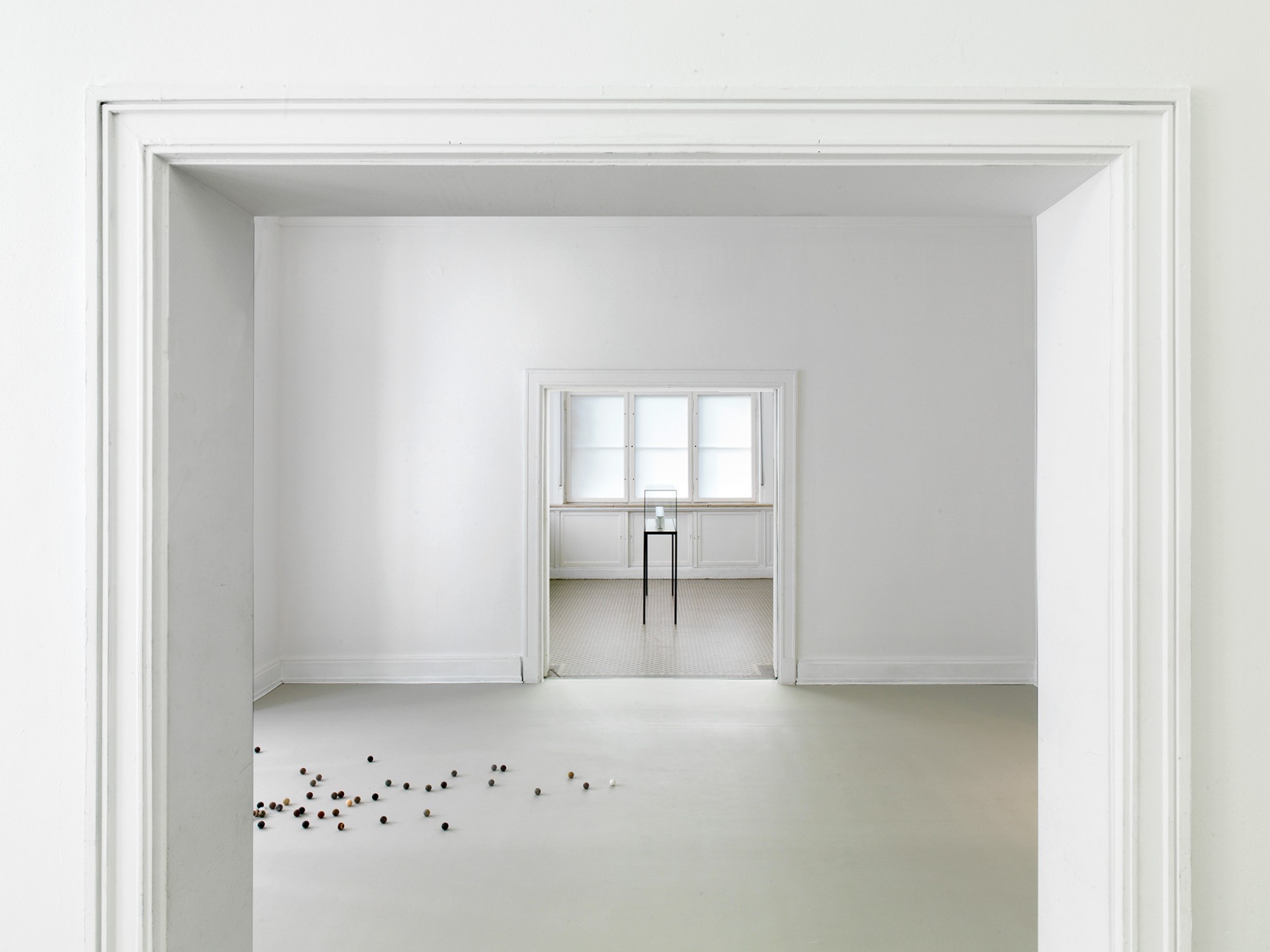 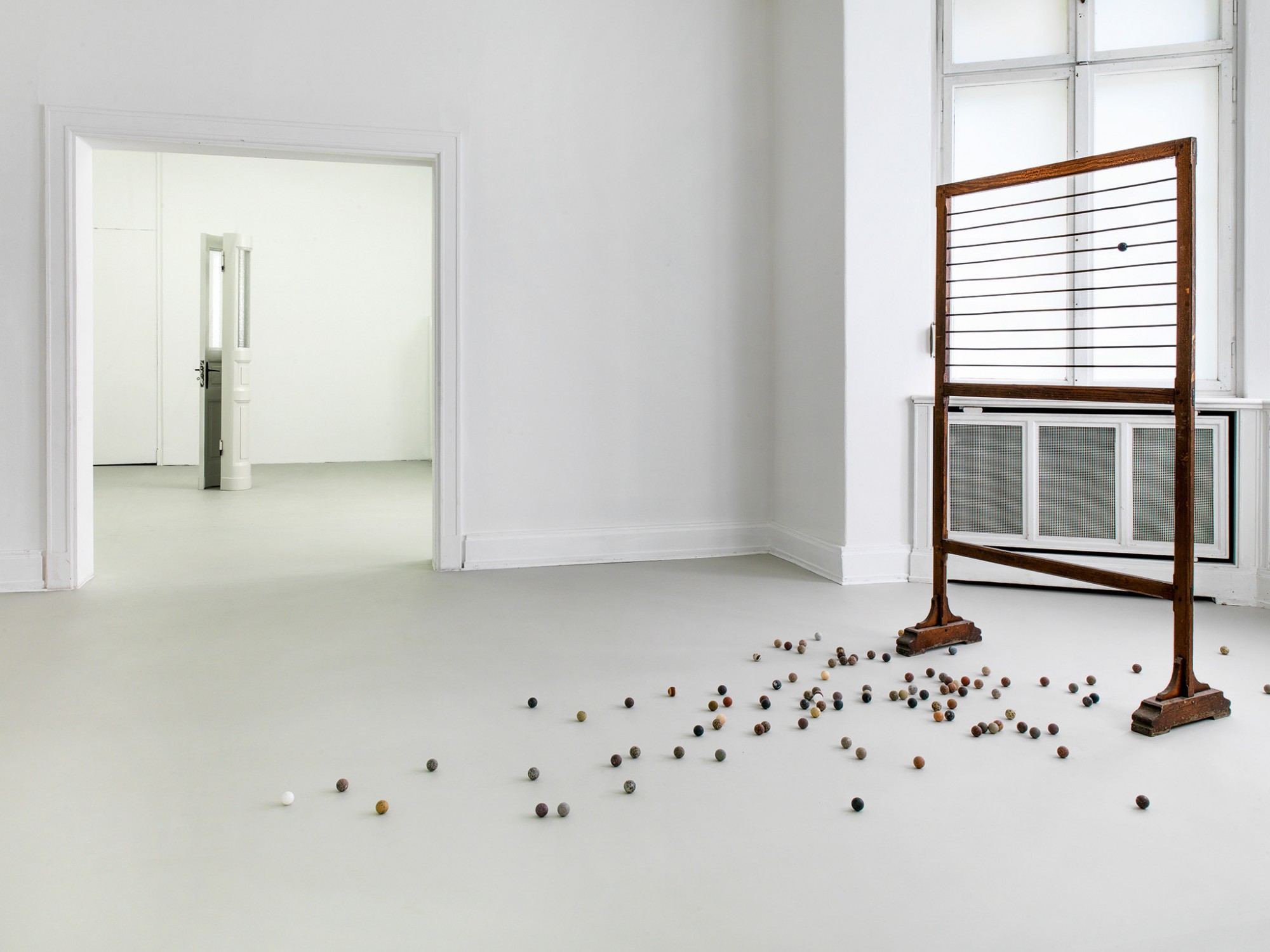 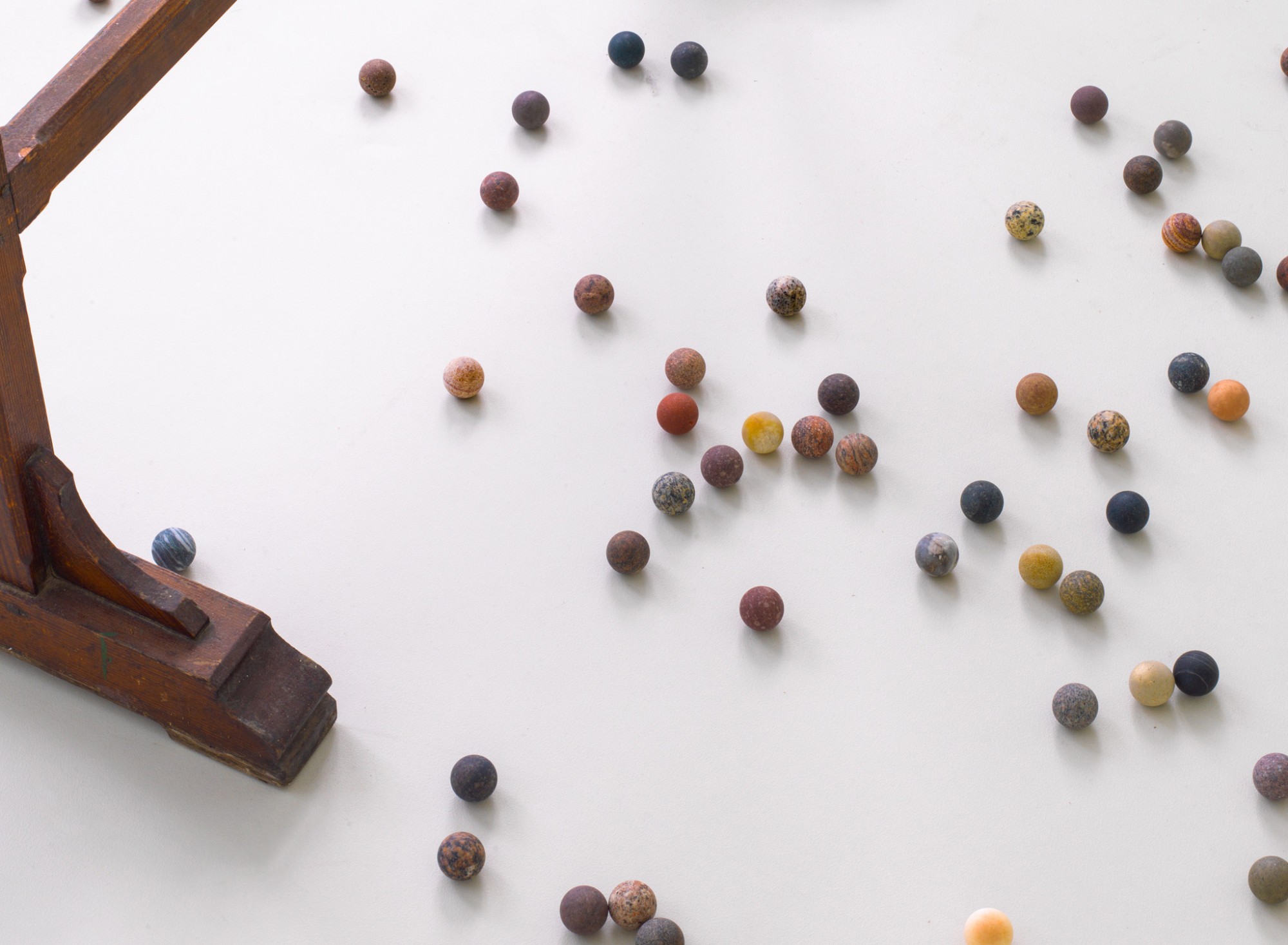 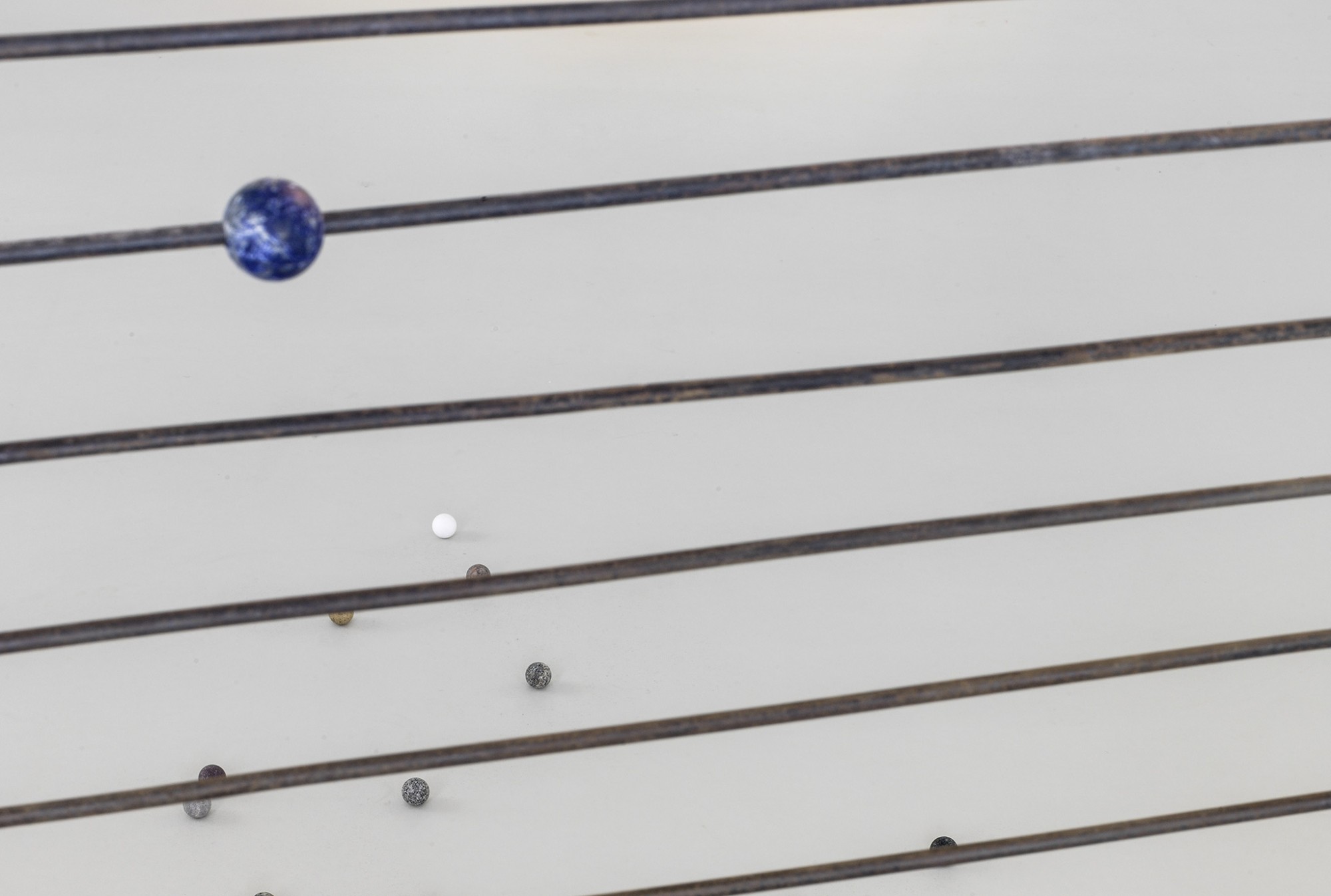 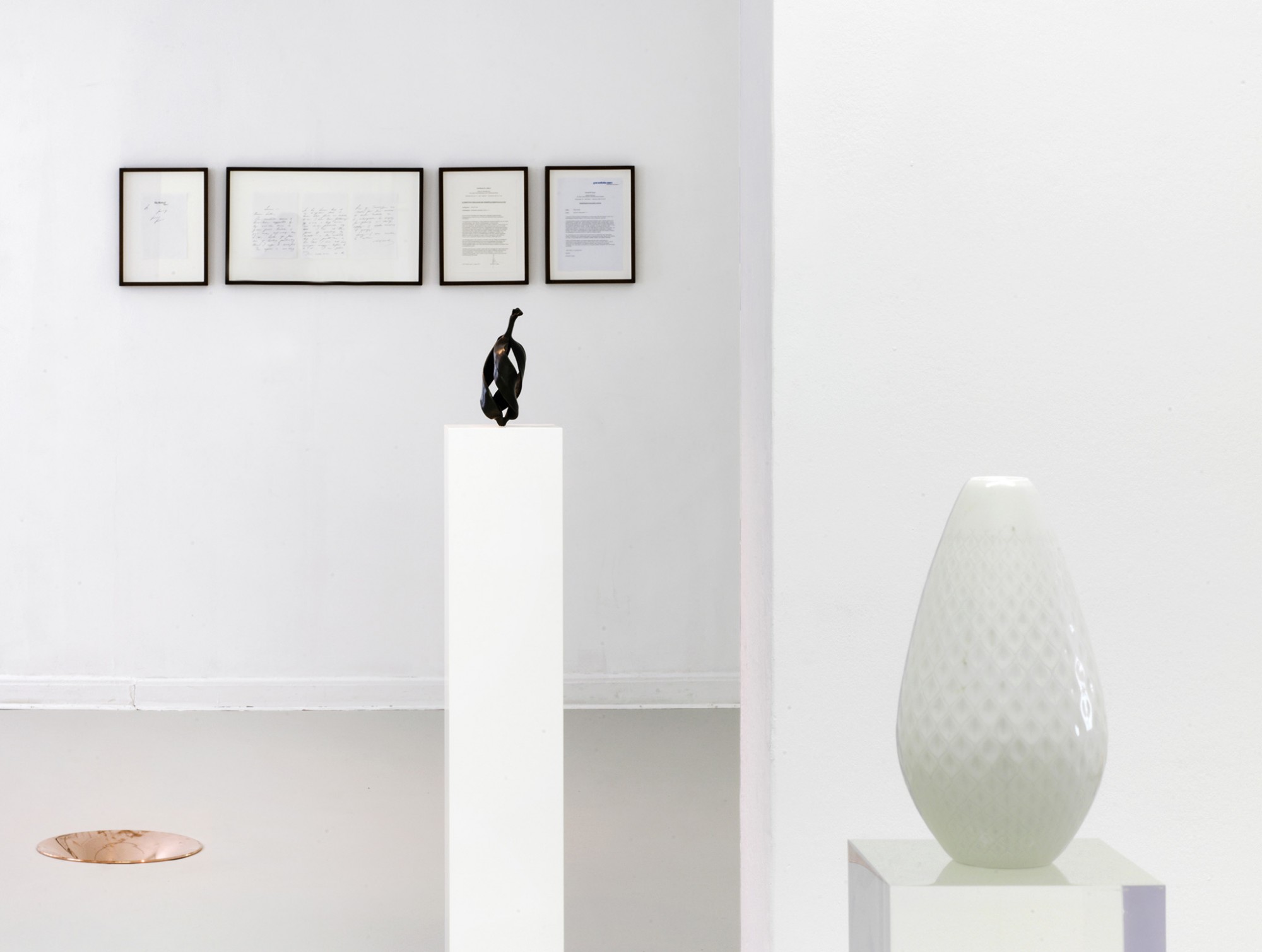 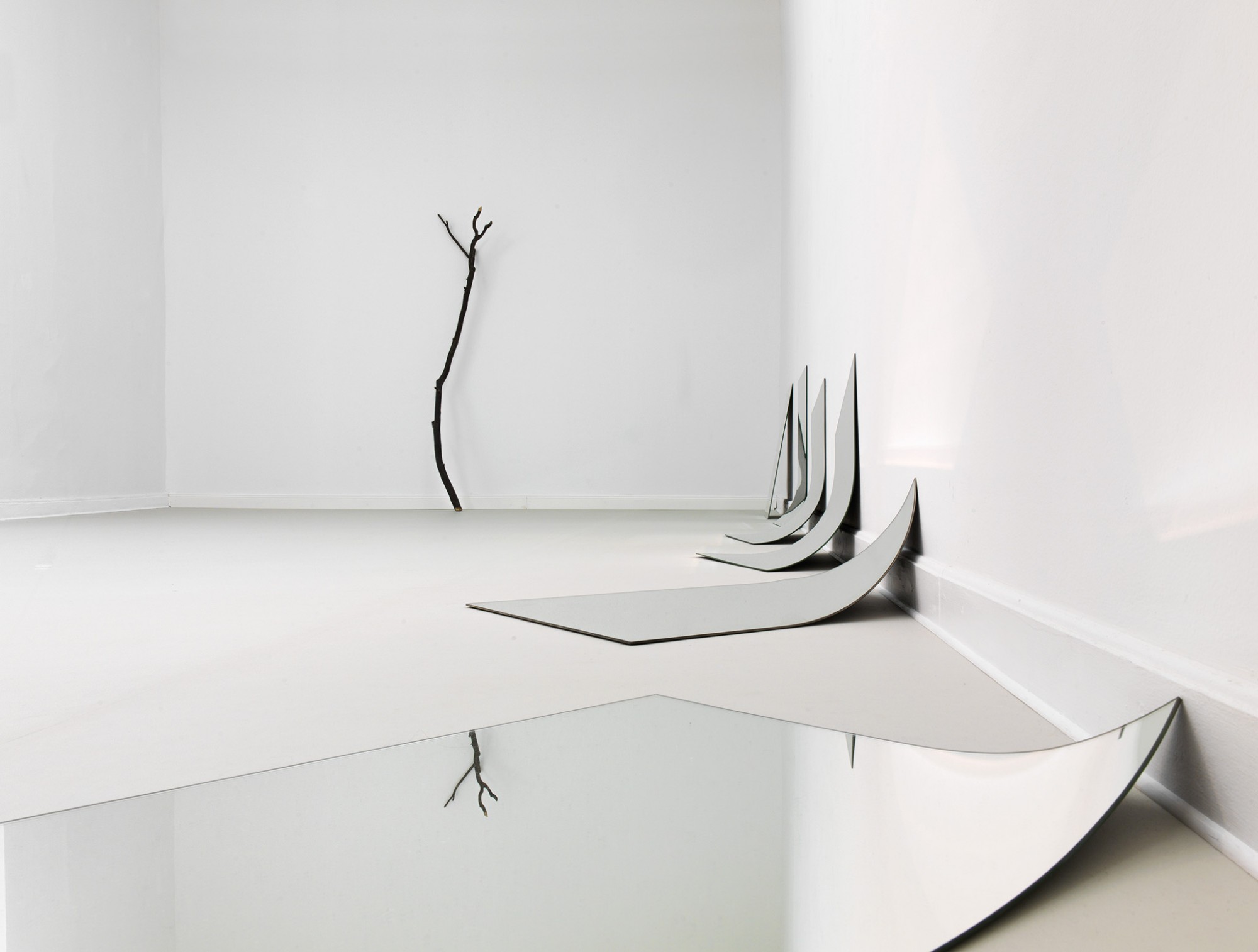 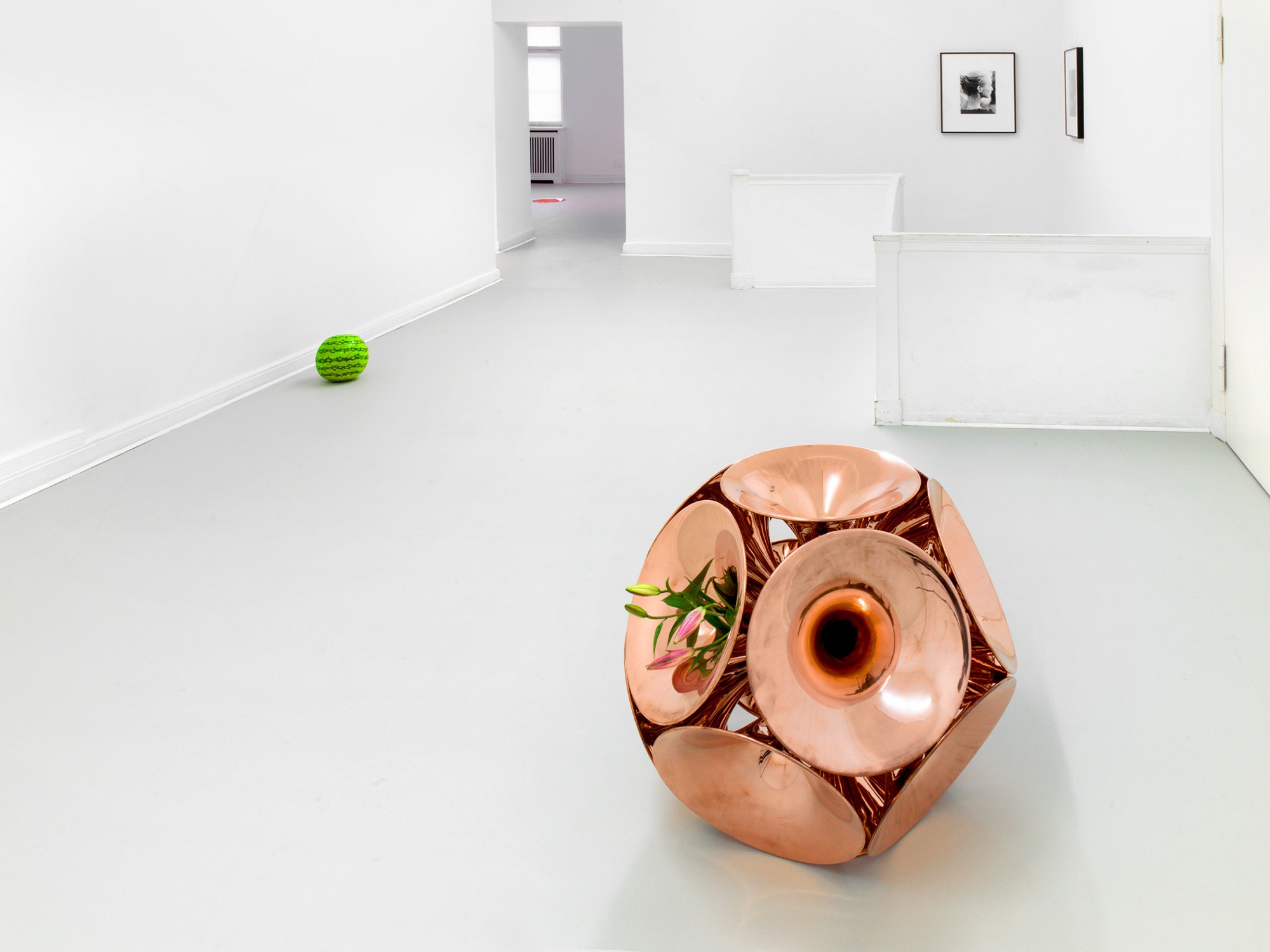 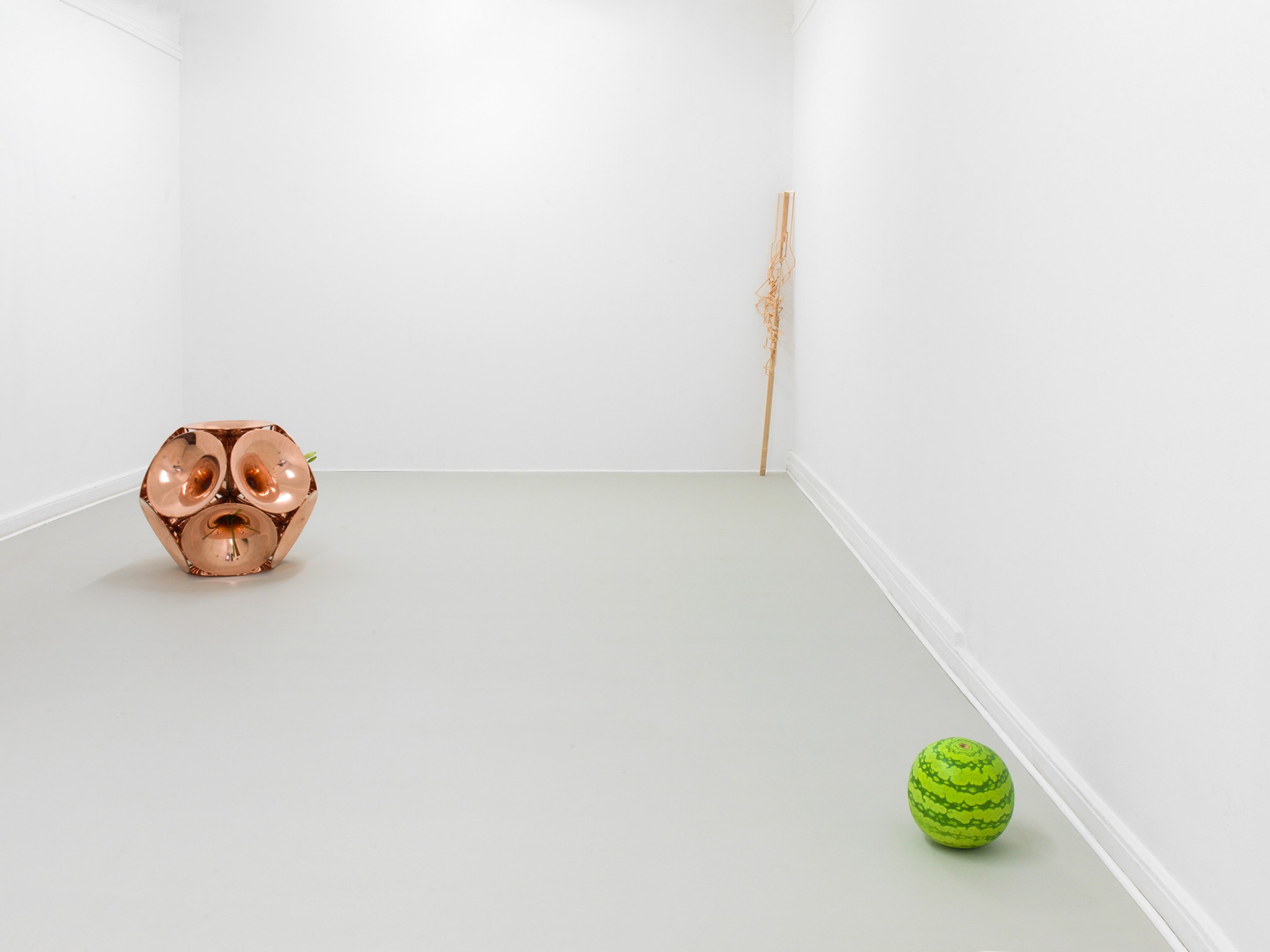 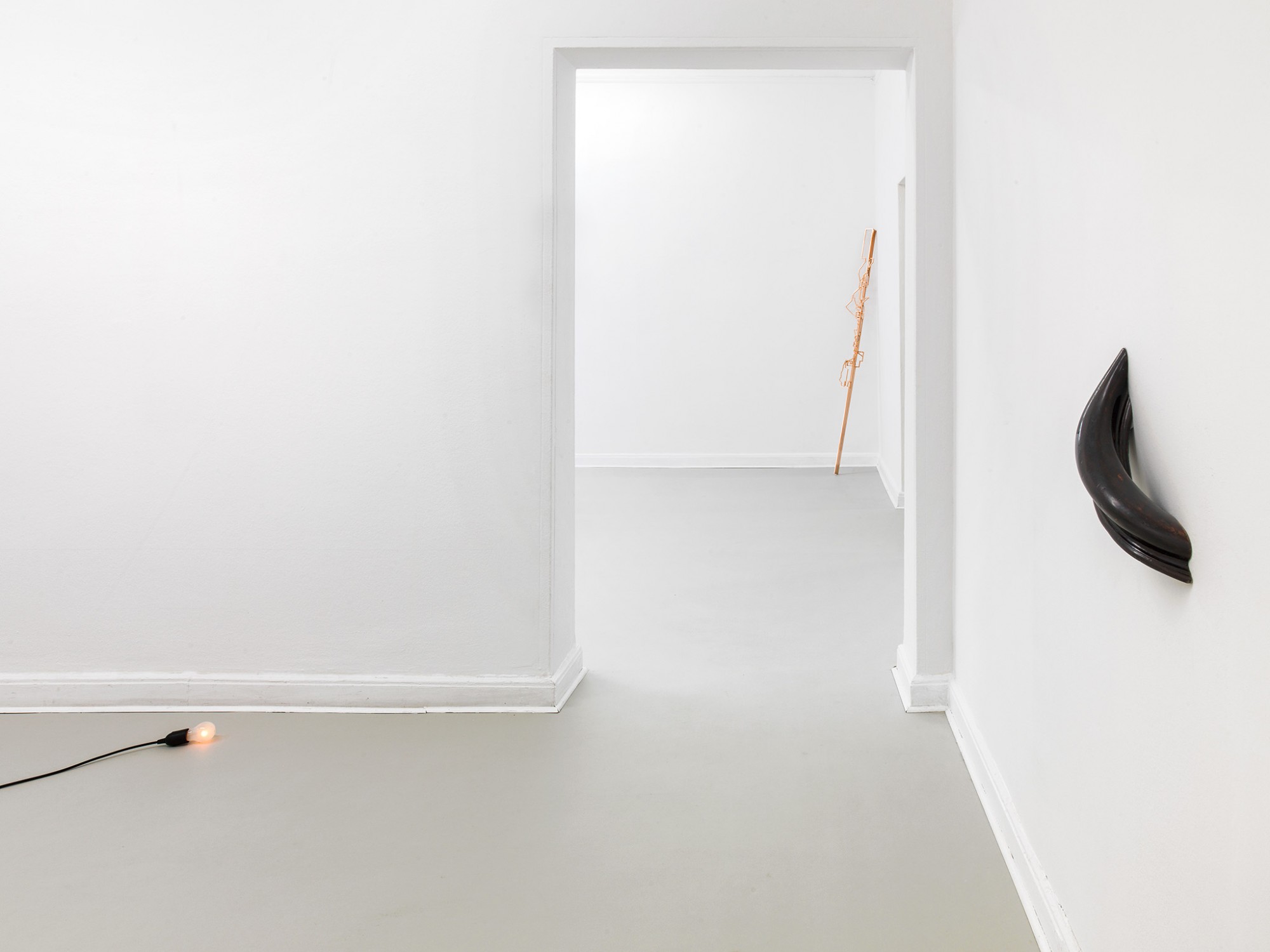 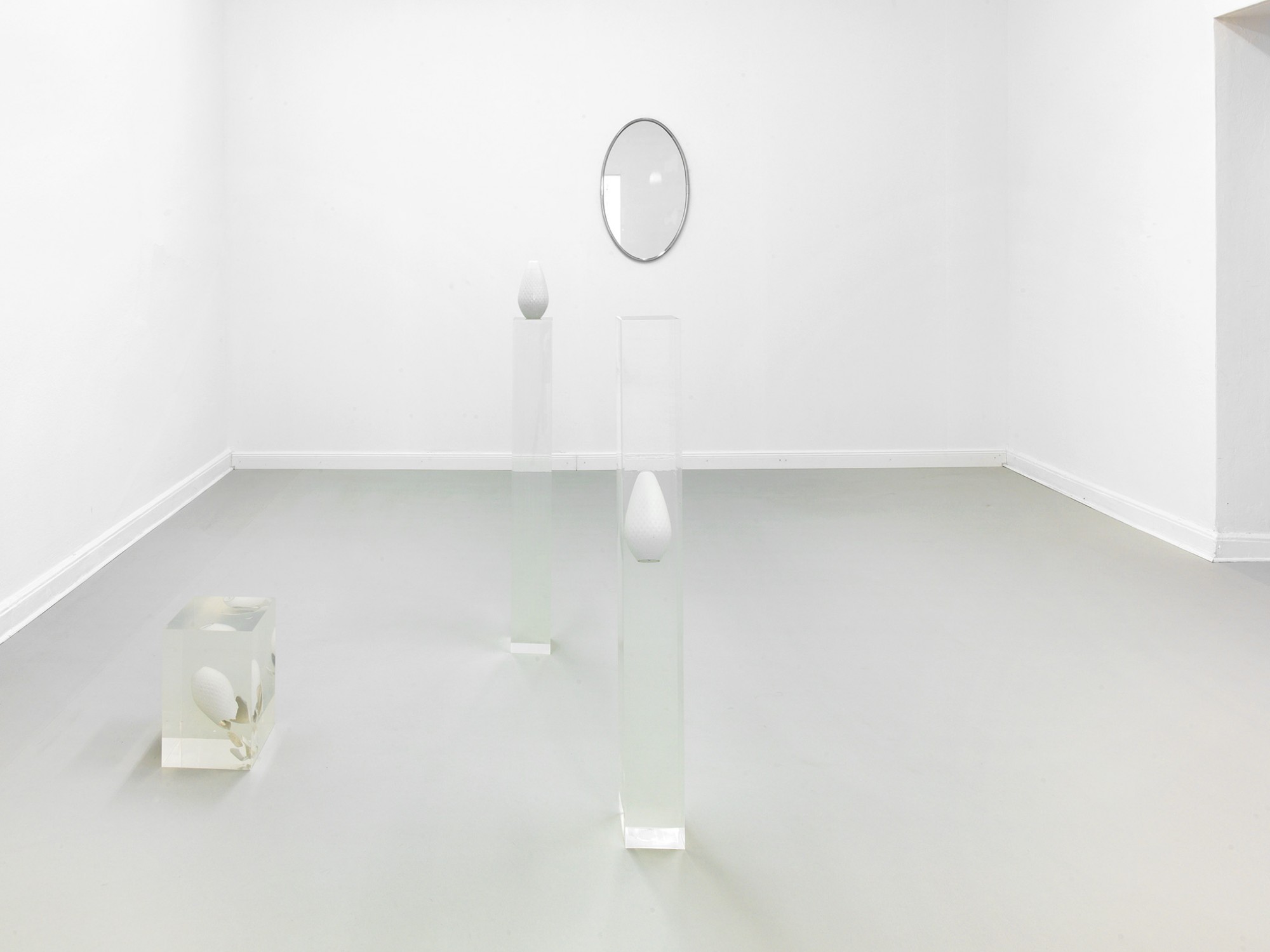 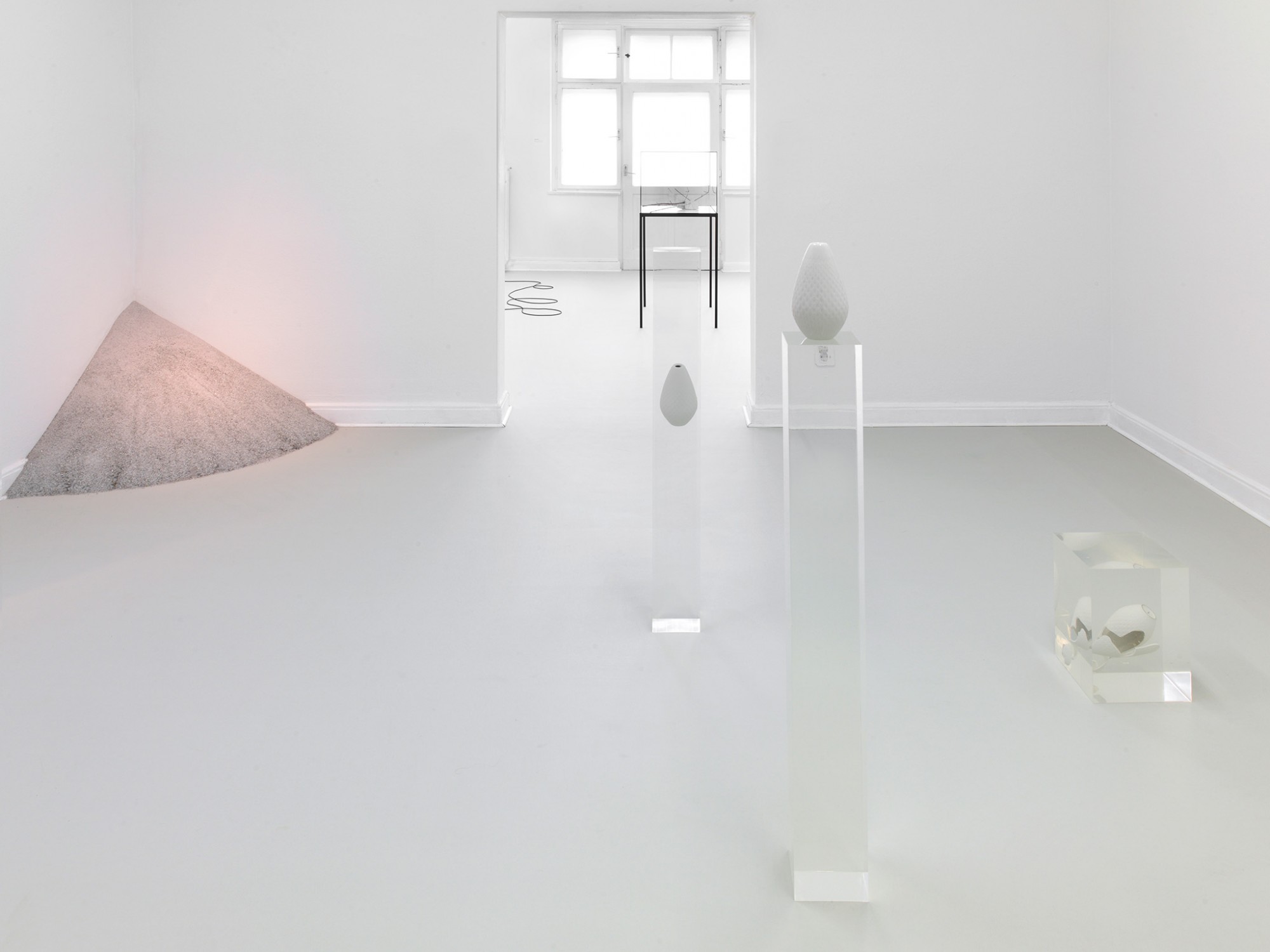 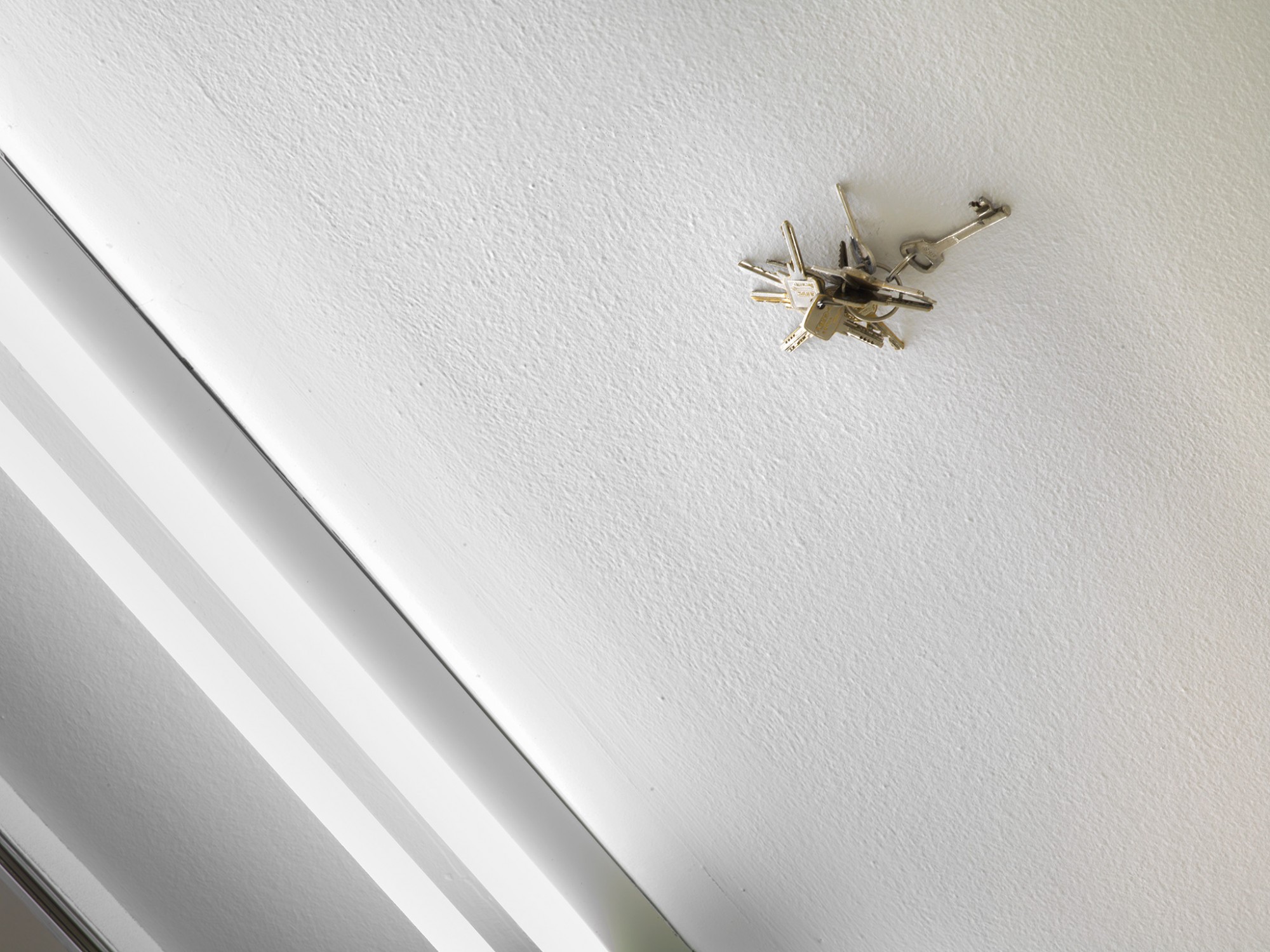 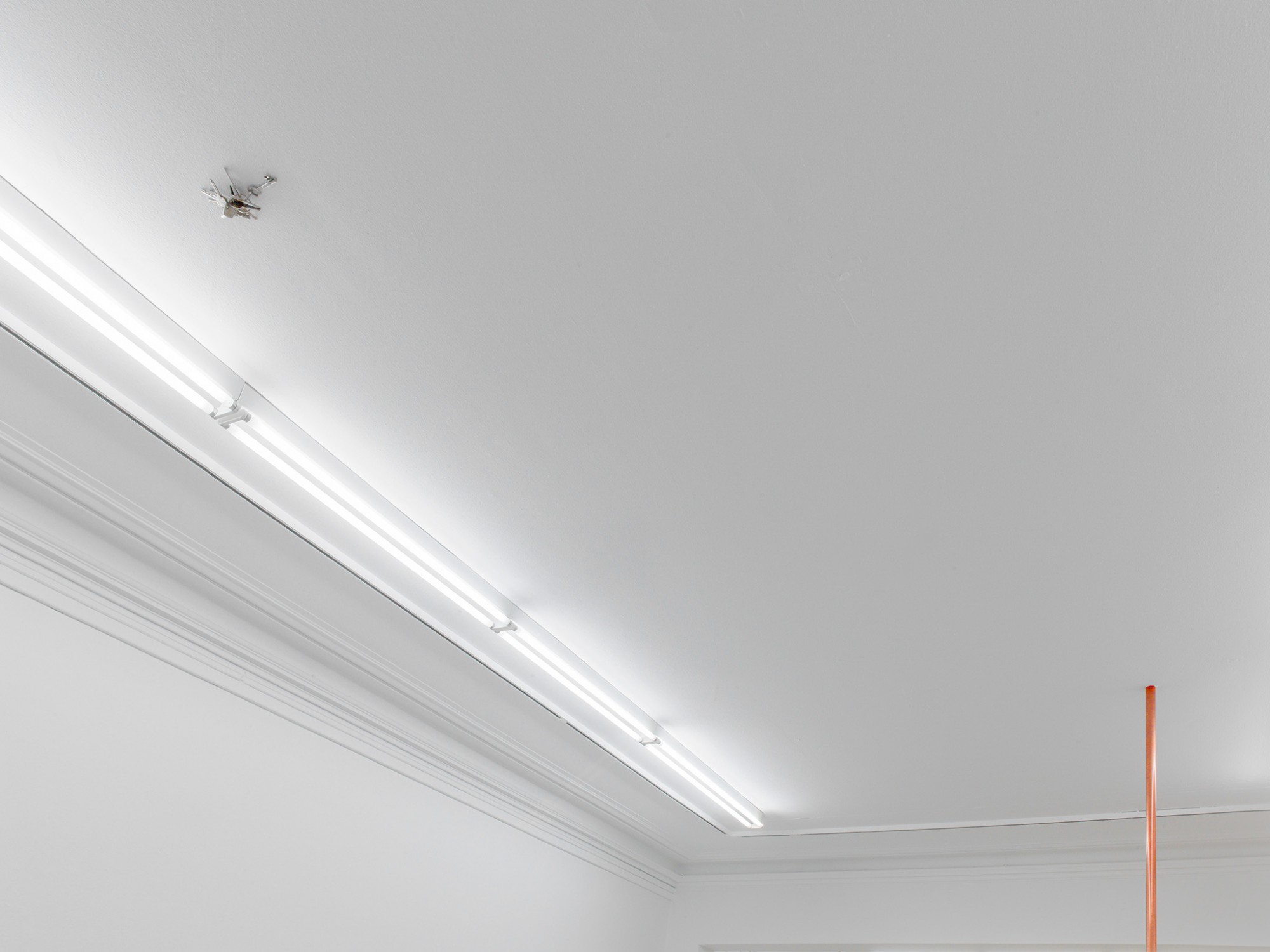 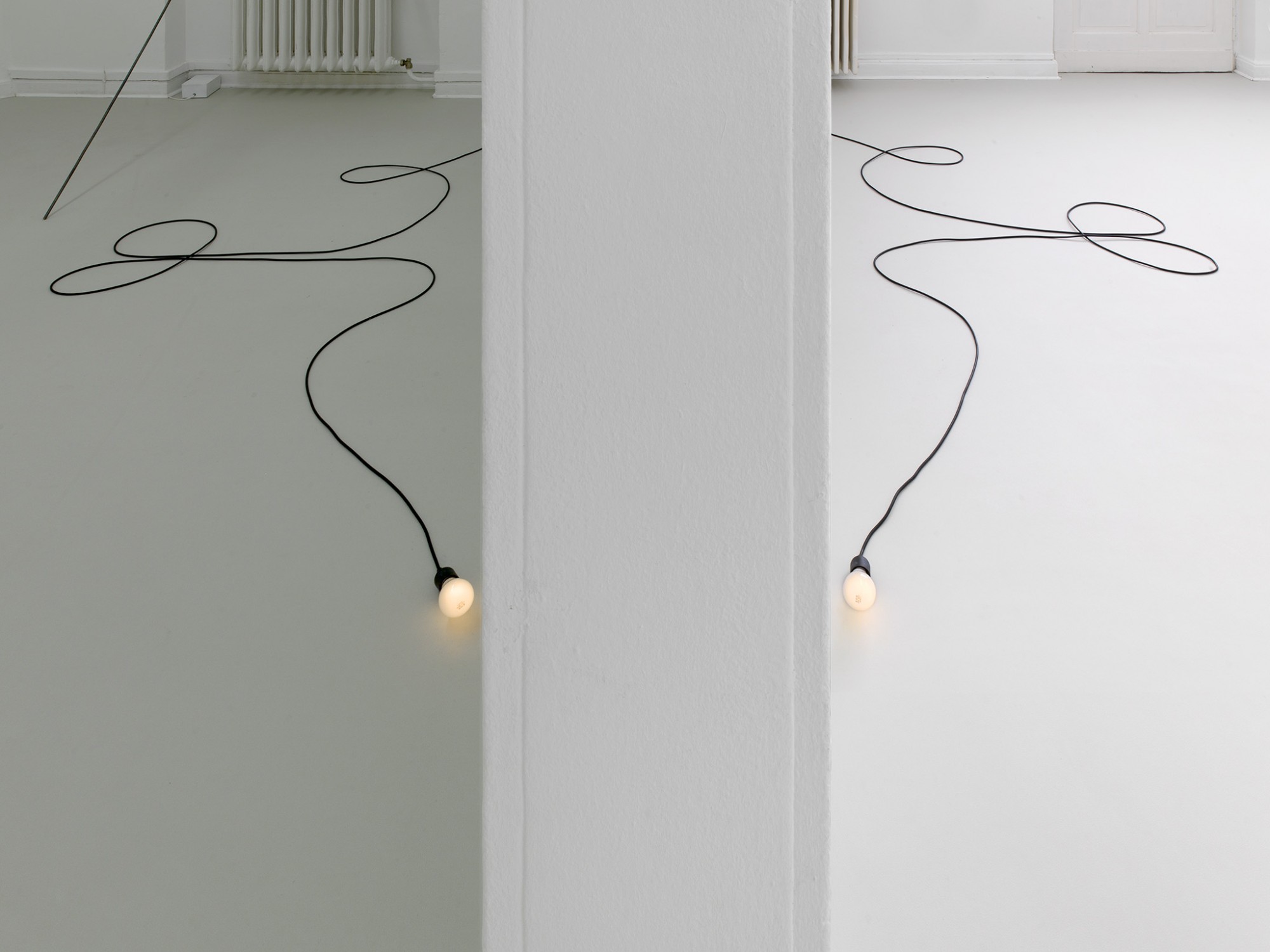 With Alicja Kwade we enter the field of artistic research of the sciences. The exhibition demonstrates both the consistency and the versatility that have marked the sculptor and conceptual artist’s treatment of the seemingly predictable and yet unimaginable for more than ten years. She starts from the basic questions of theoretical physics, philosophy and sociology: How did the universe originate? Are there parallel worlds? What is time? What is reality? What is delusion? What is truth? From this starting point the Polish-born, Berlin-based artist poses fundamental questions to the norms and models of our everyday social life. With extreme precision, simple means and a great sense of the contingent and the paradoxical she succeeds in translating complex correlations to sculpture.

The shape of a spiral wooden door curled around its vertical axis, Eadem Mutata Resurgo 3 (‘transformed I rise again as the same’), (2013) in the first room of the show proper owes its form to research by the Swiss experimental physicist Jacob Bernoulli, who discovered in the late seventeenth century that there are spirals everywhere in nature that correspond to the shape of a certain logarithmic series: snail shells, cyclones, the flight of insects under lamp lights or the way seeds are arranged in a sunflower. 'The artist brings together a reality of scientific calculations and an entity, which does not normally form part of this reality, while transferring it into an object that is both surreal in appearance and compellingly sculptural.

A simple wall clock, Influence (2015), demonstrates just how confusing the artistic integration of theoretical models into mundane objects really is. The clock’s hands are speeded up and slowed down at certain points. Surreal and confusing, or even irritating, as this seems in everyday life, what we are able to observe here under artistic conditions is the insight, known since Isaac Newton, that time and space are no constants. Albert Einstein refined our knowledge in this regard when he showed that clocks run slower in the gravitational field of the Earth than at higher altitudes, or, in other words, that the speed at which time flows depends on the influence of gravity. This knowledge verified by measurement Alicja Kwade incorporates into the run of a single minute. The subtle adjustment of the clock hand indicating the seconds unsettles our notion of a steady flow of time.

Hypothetisches Gebilde II–IV (2015) What we see is a system of copper piping with trumpet-shaped openings, of which only segments can be seen from the various vantage points. In places, the piping vanishes under heaps of sand. By running the piping system into every spatial direction Alicja Kwade renders it incomprehensible. Starting from scientific illustrations of wormhole theories, she works with a material very familiar from everyday use. She adds granite as a sign of time and transience, which, in shapes from hard chunks to ground heaps, emerge in various aggregation states and varying dimensions. Everything seems to be connected to everything.

Everywhere in the show visitors encounter objects, images and writings in duplicate and even triplicate form: stones lying on the floor in front of a sheet of glass and engaging our minds, again by means of a mirror image, in a confusing game of virtuality; branches leaning against a wall; two portraits of the artist in half profile; two samples of handwriting; three vases... Slowly, the viewer cottons on to what is paradoxical about all this because initially he does not notice that he is being conned by copies. At the same time we find it hard to commit complex forms to memory by our limited perceptual capacities. We are only too eager to accept a Doppelgänger as such, even though only one of the photographs actually shows the artist.

Similarly, while we take for granted that the samples of handwriting are by the same hand, they represent a reduplication of identities. The manuscript is by the Serbian inventor and physicist Nicola Tesla, who died in New York in 1943 after achieving fame and recognition for his contributions on energy transfers in the field of electronic engineering. Alicja Kwade has copied Tesla’s manuscripts repeatedly until she was able to produce credible fakes of his handwriting. The graphologist did not realise that two people and characters had written the samples after having developed one and the same handwriting.

Alicja Kwade is very much interested in parallel worlds that draw on the knowledge of antiparticles. Wikipedia informs us that for (almost) every elementary particle there exists a completely symmetrical antiparticle of the same mass, life span and spin. The pair also shares the same kind and amount of interaction. The reflection of space, time and gravitation is also achieved by mirrors, which have given up the rigid form that is expected of them and now render different physical states. Hence, what we observe in Monologue from the 11th floor, taken as a whole, is that Alicja Kwade conjures up theoretical realities and make-believe worlds everywhere, employing means of amplification and the slowing down of time in doing so. At any rate, she works with a fine sense of contingency – nothing is necessarily as it is –, a keen eye for the paradoxical as well as a great sense of humour, posing questions about the perception of the world, which, fortunately, she does not claim to answer.

A catalogue in German and English featuring an introduction by Katja Blomberg and an essay by Elena Esposito will be published with Verlag der Buchhandlung Walther König.