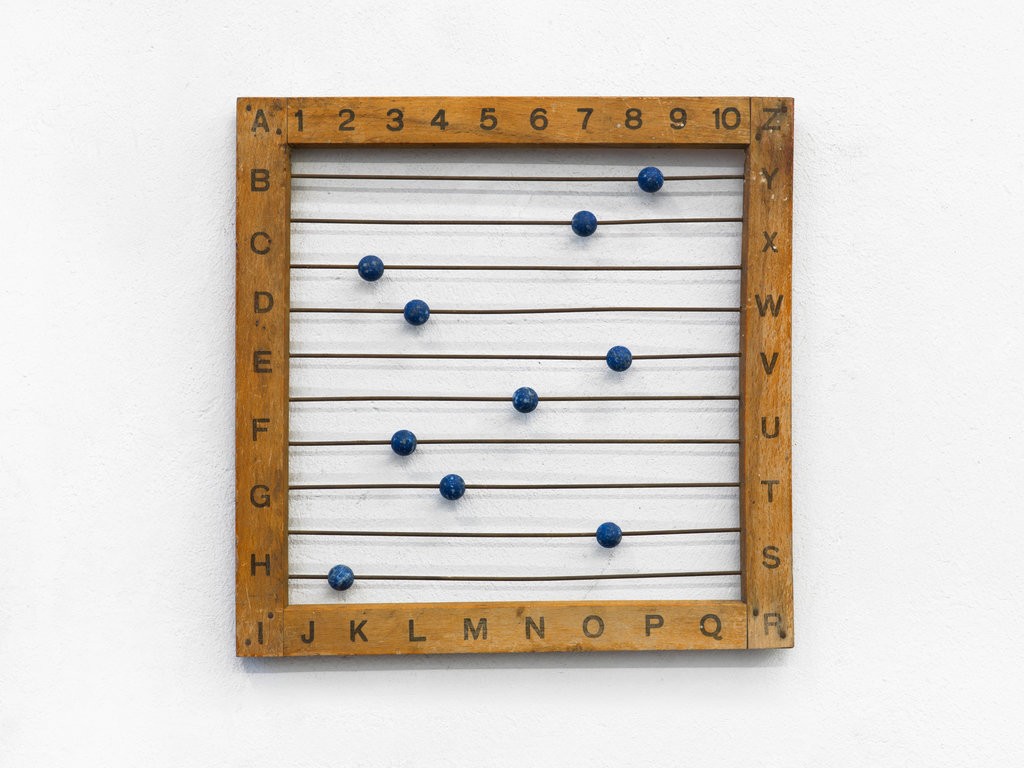 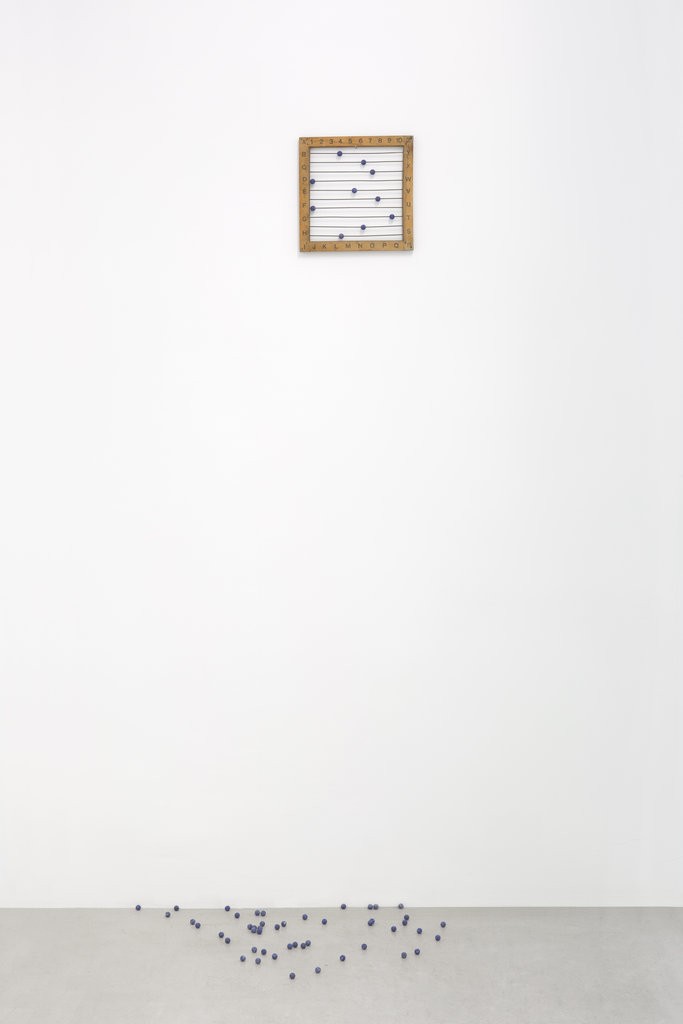 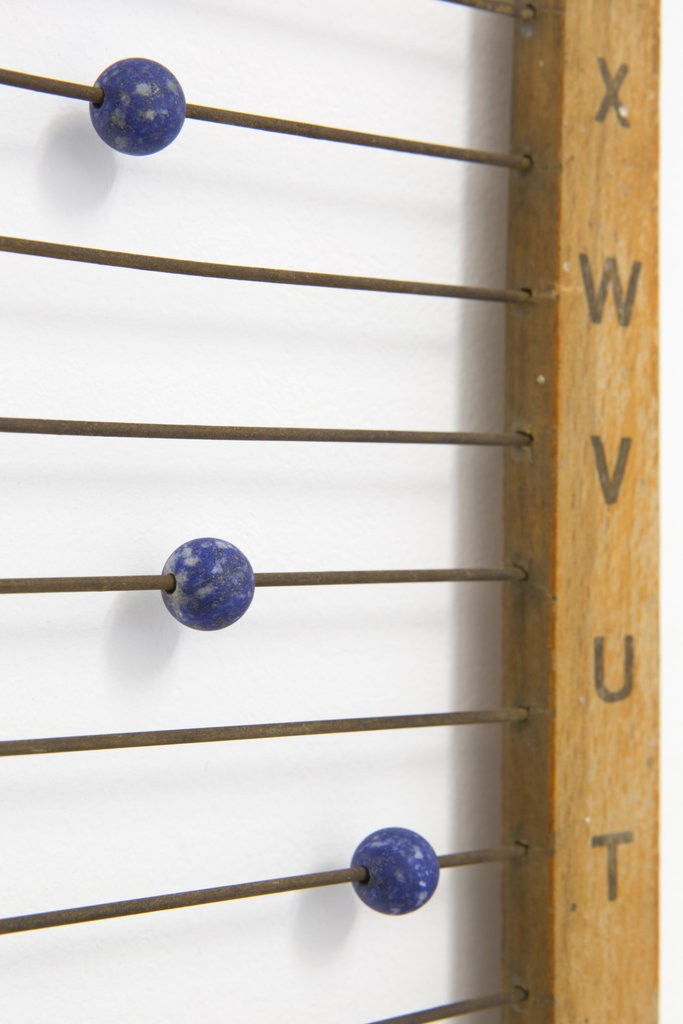 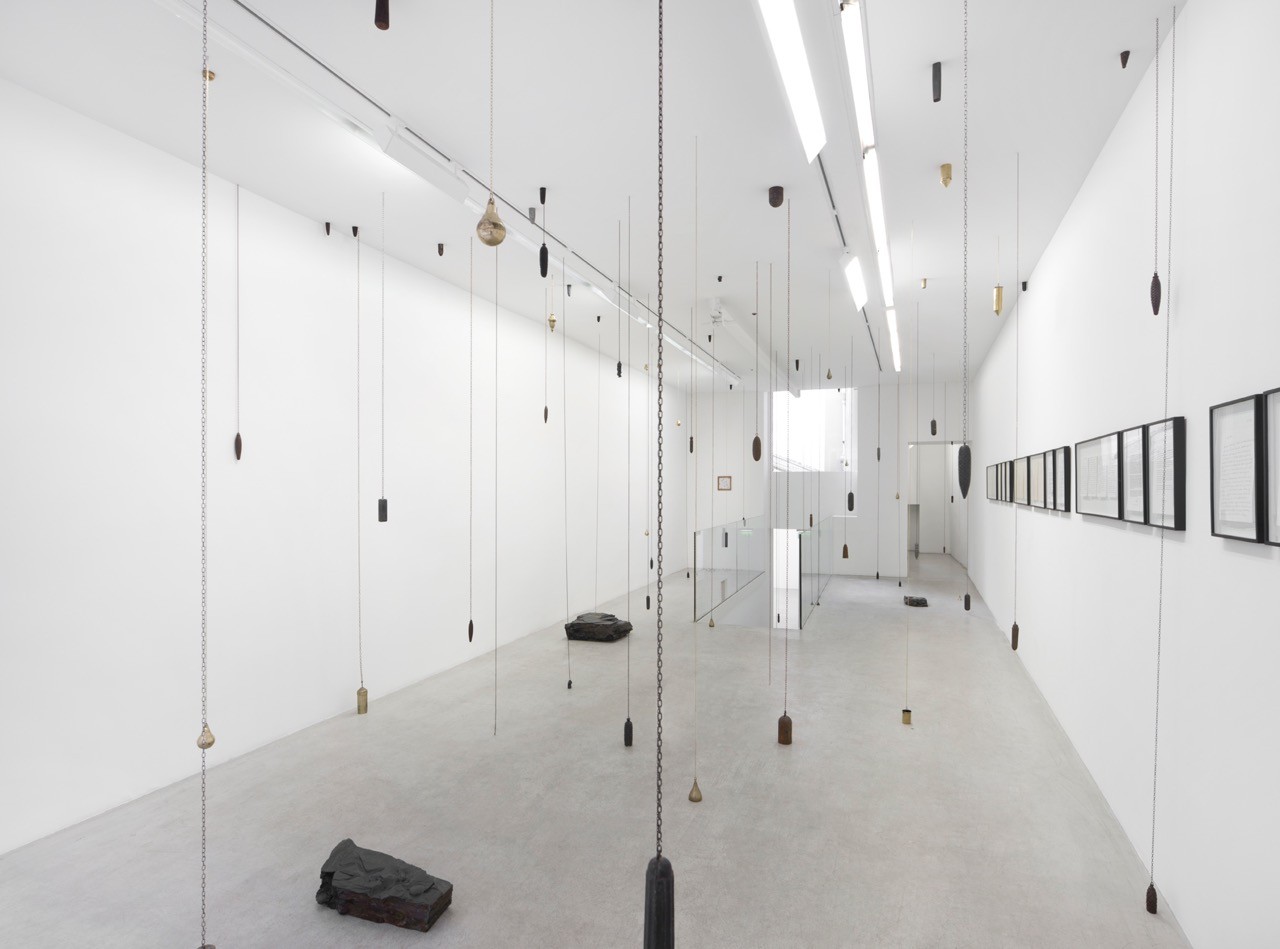 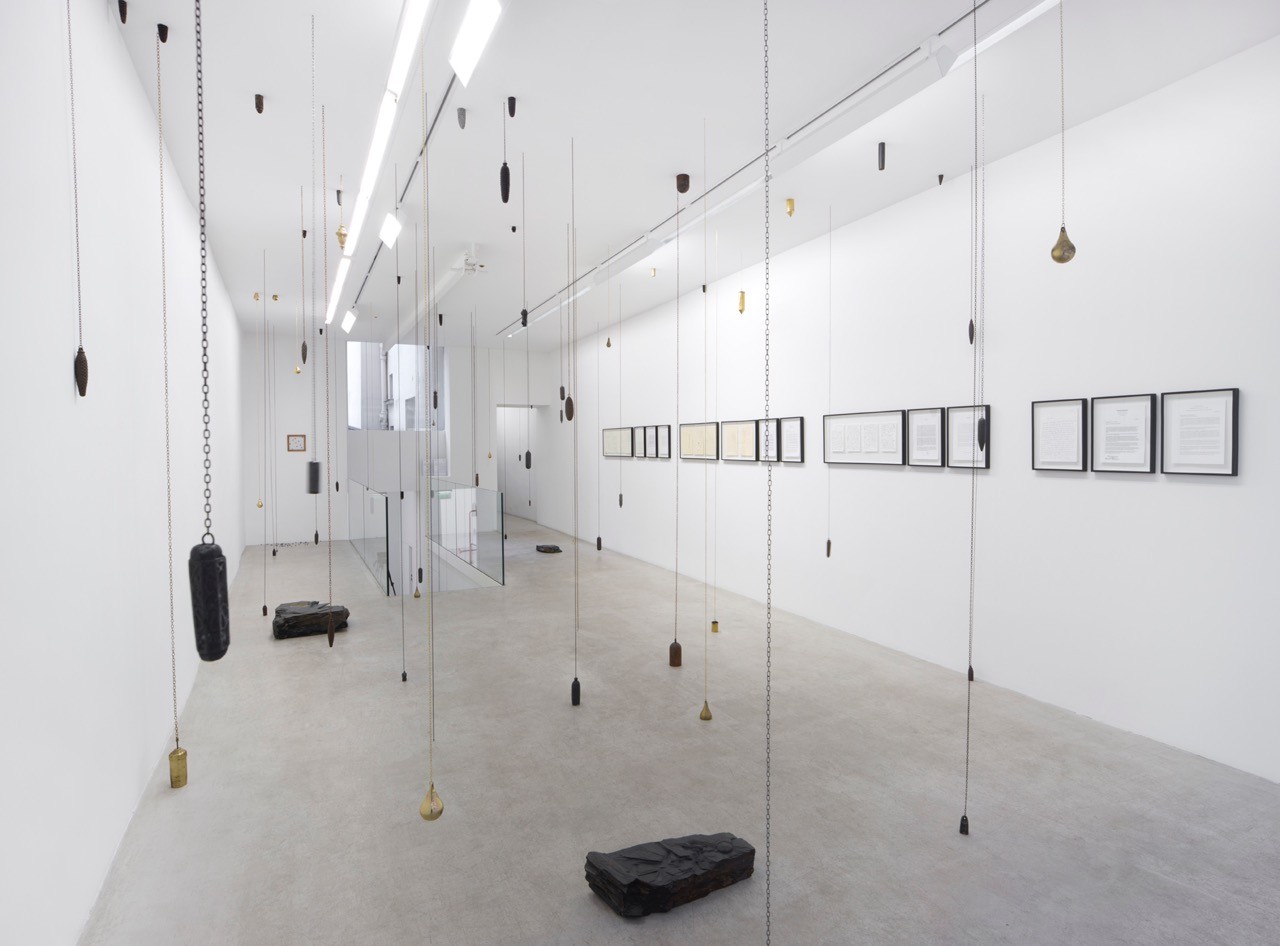 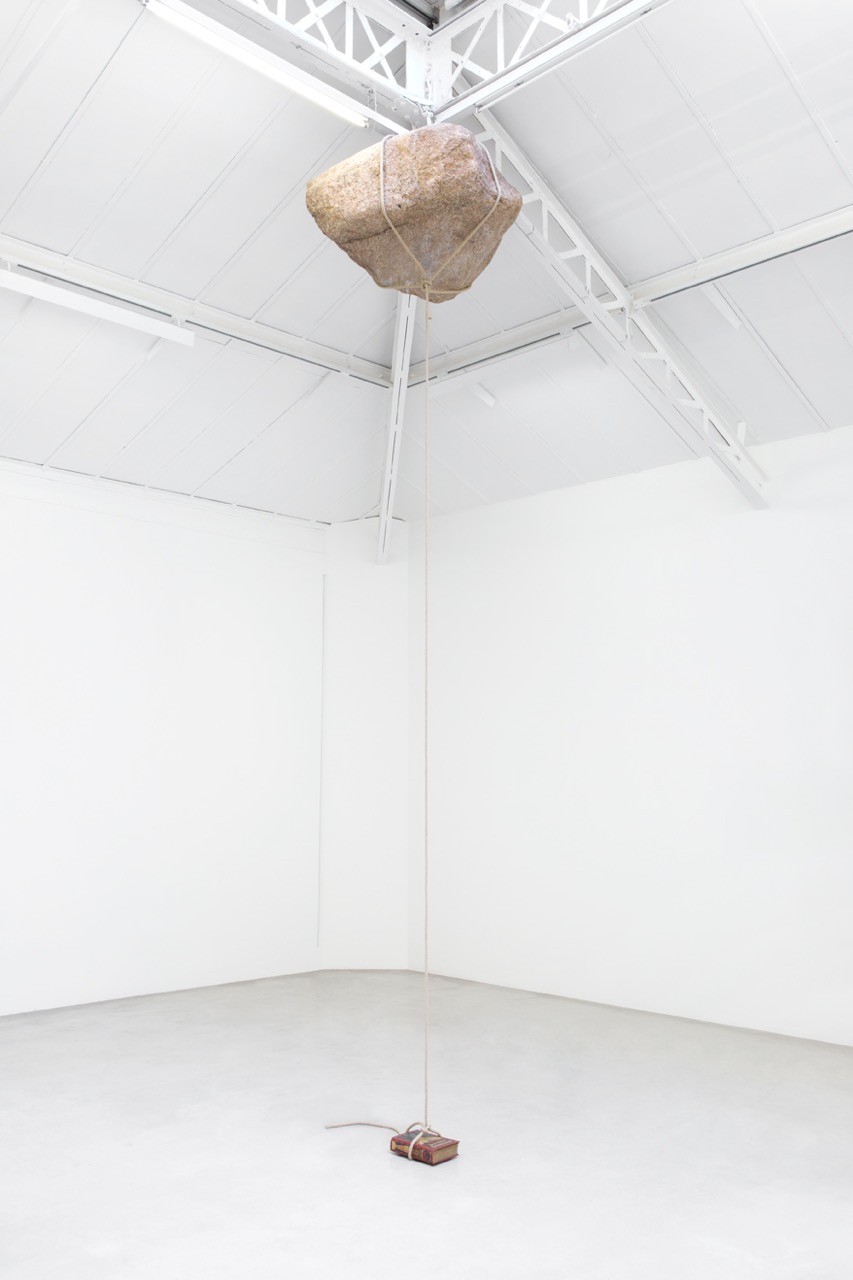 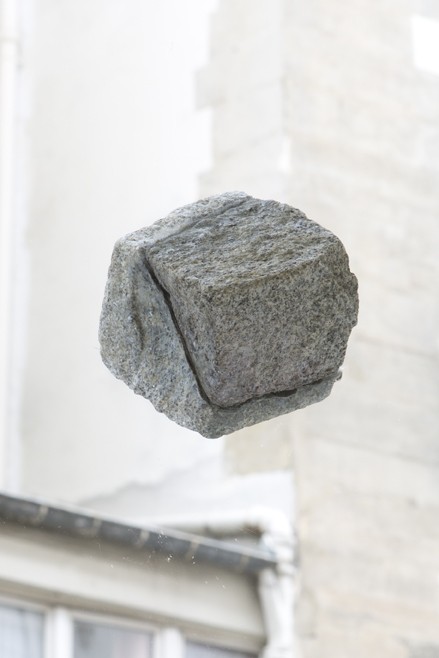 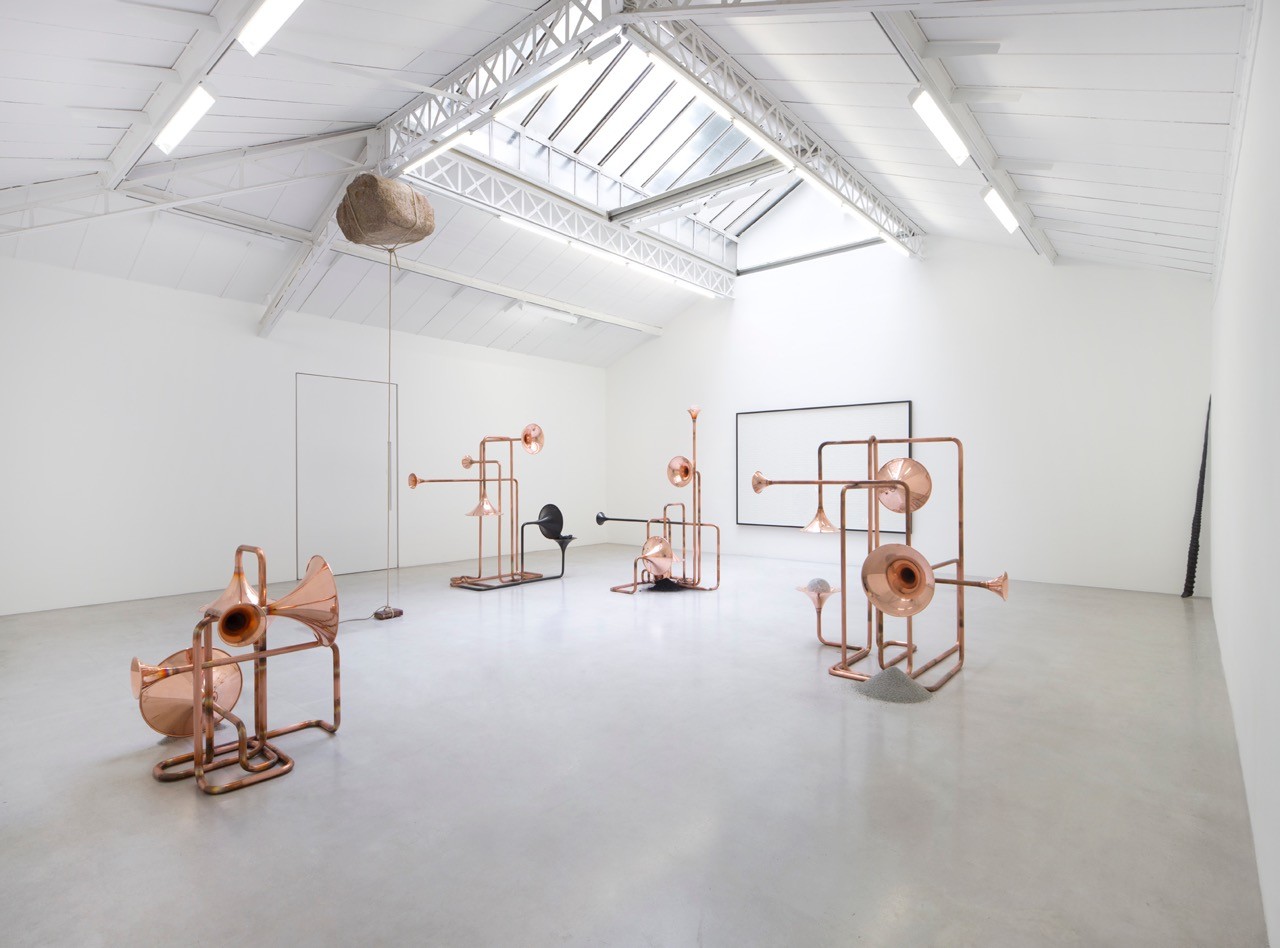 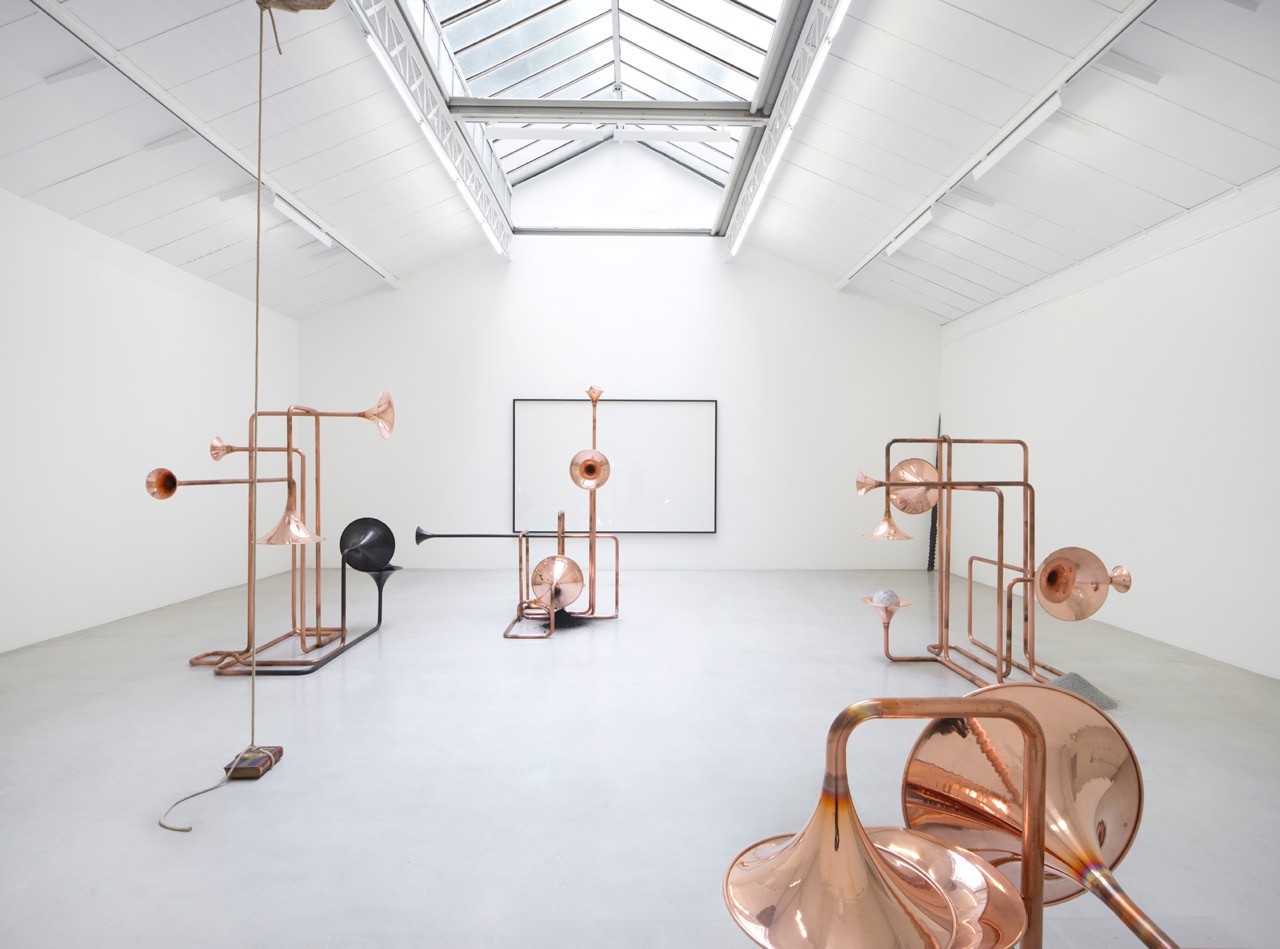 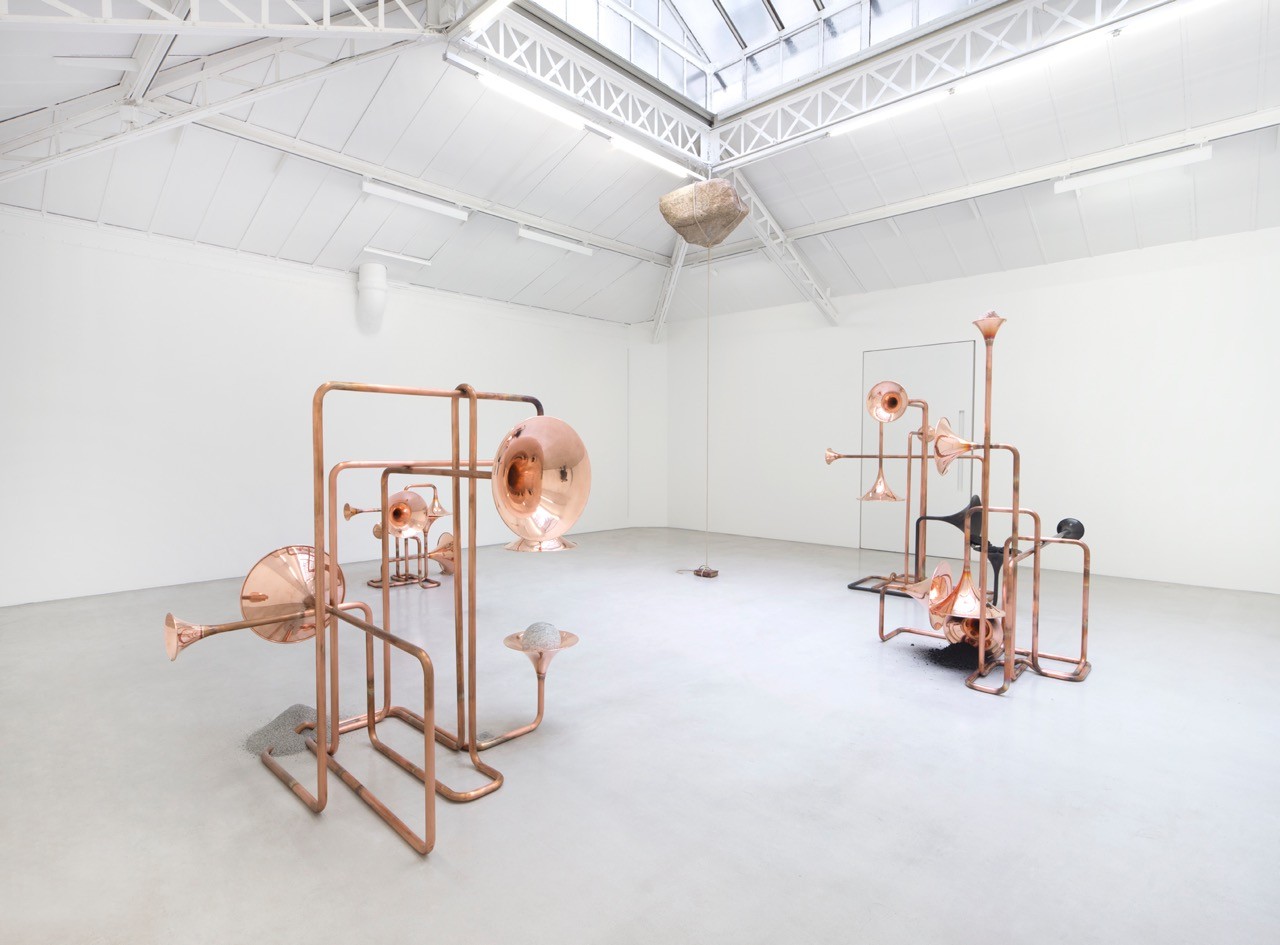 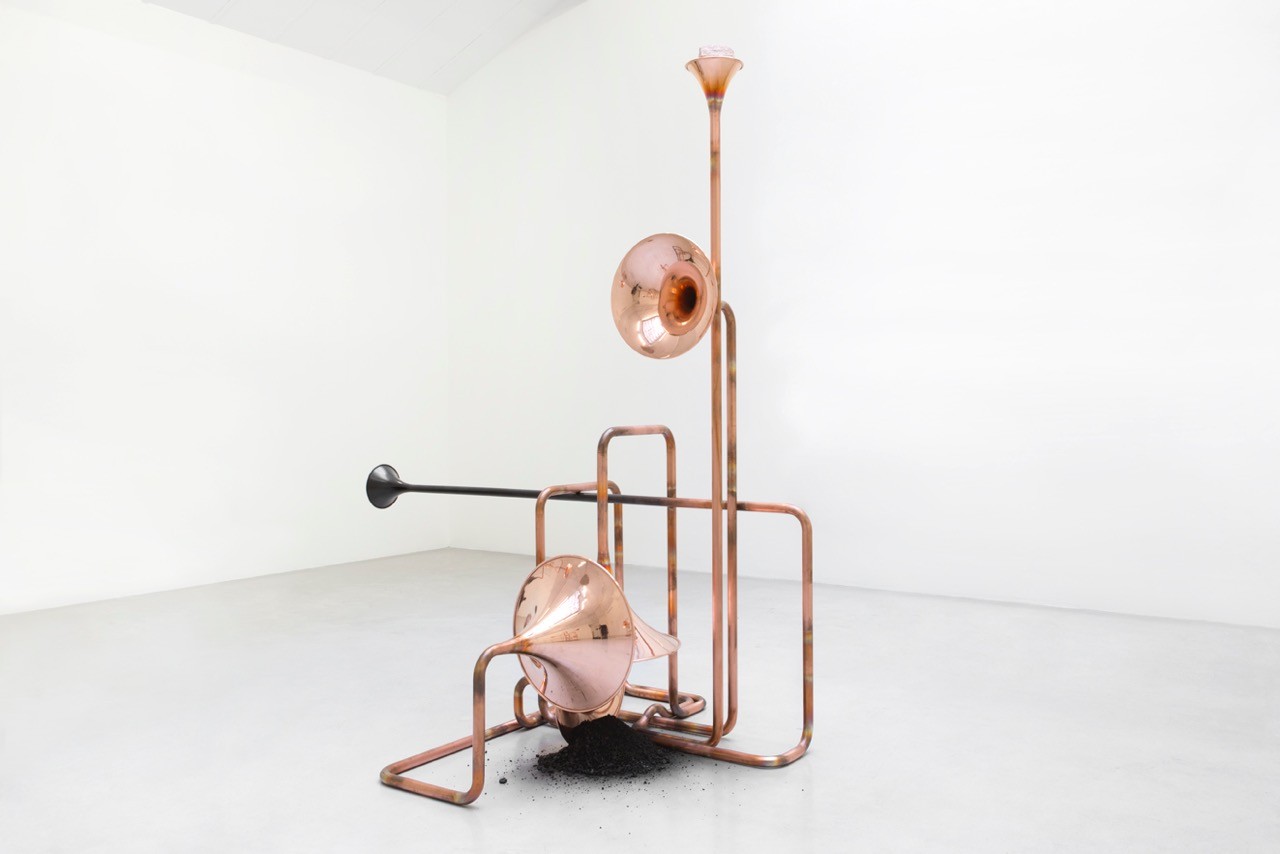 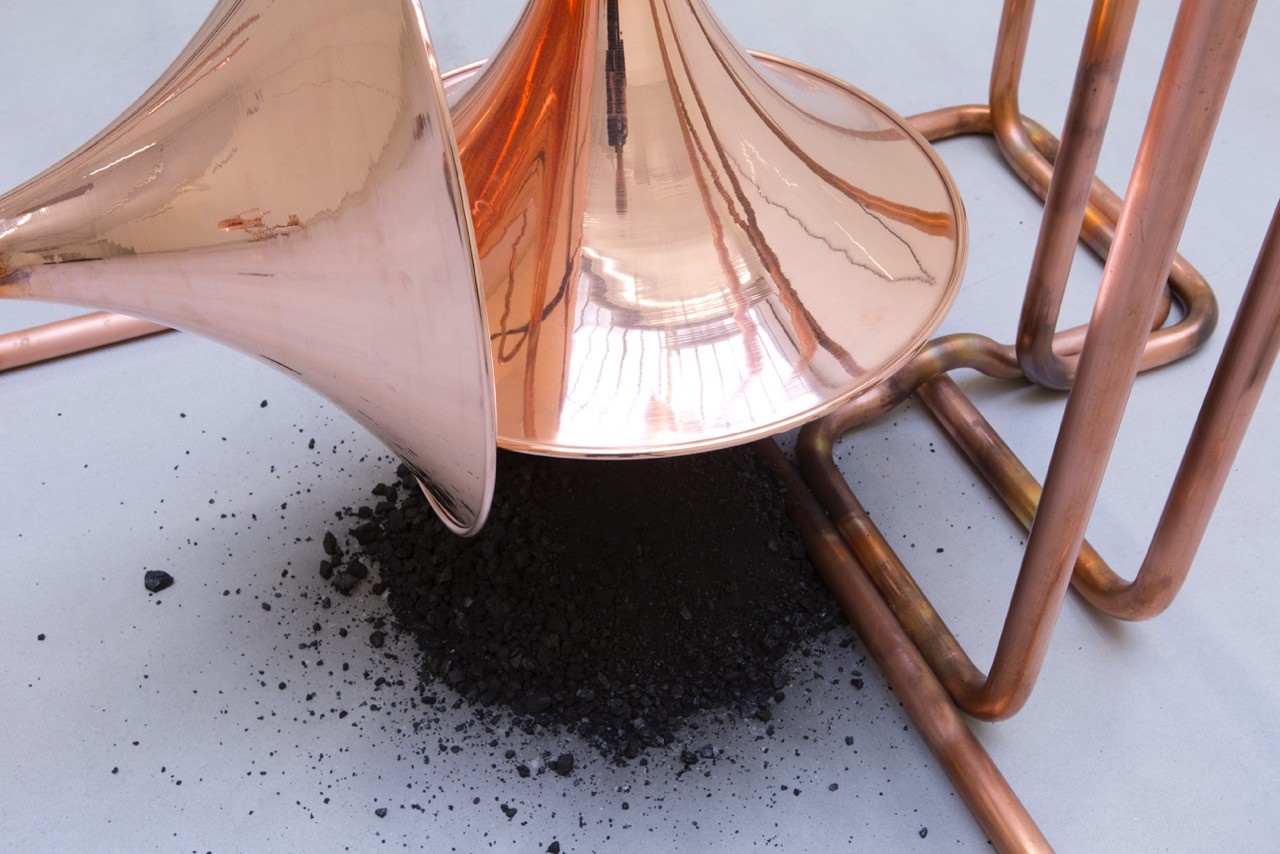 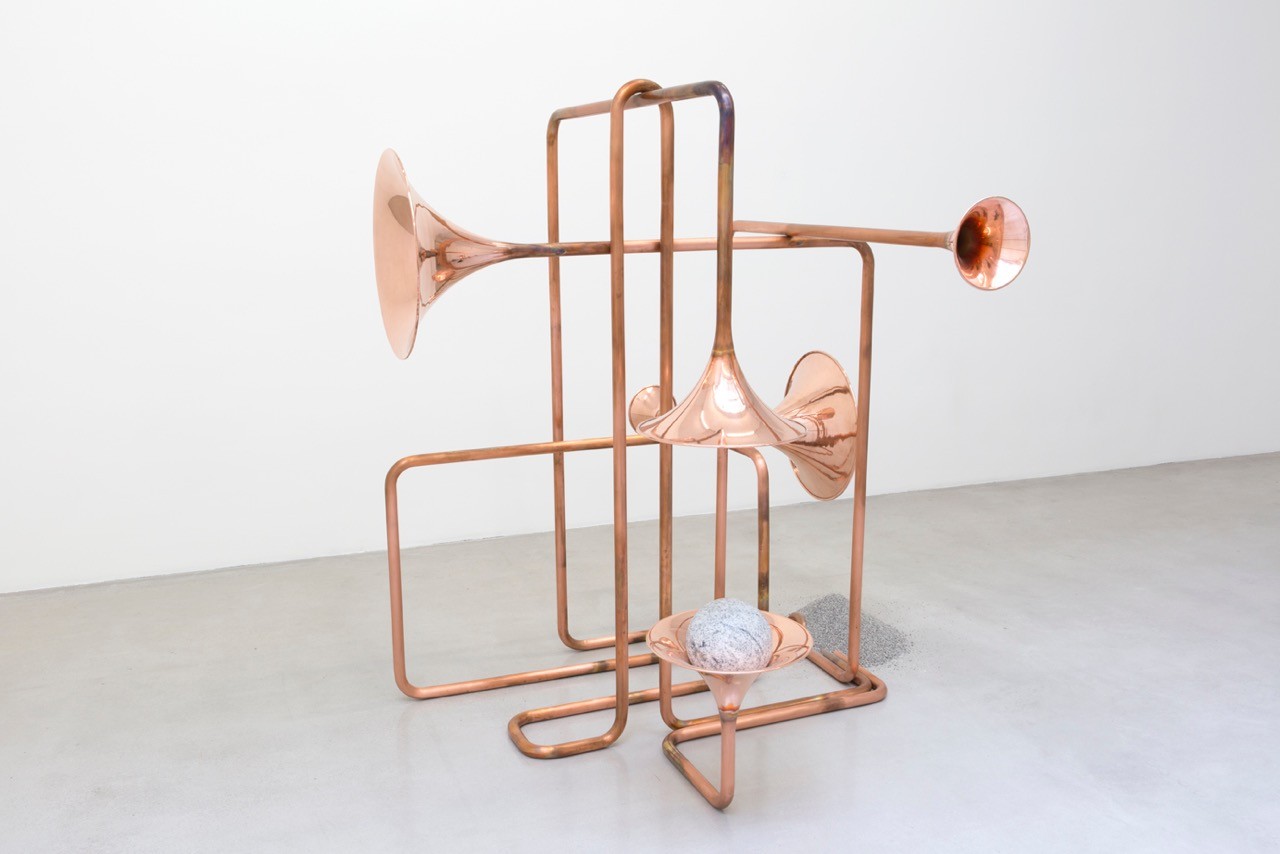 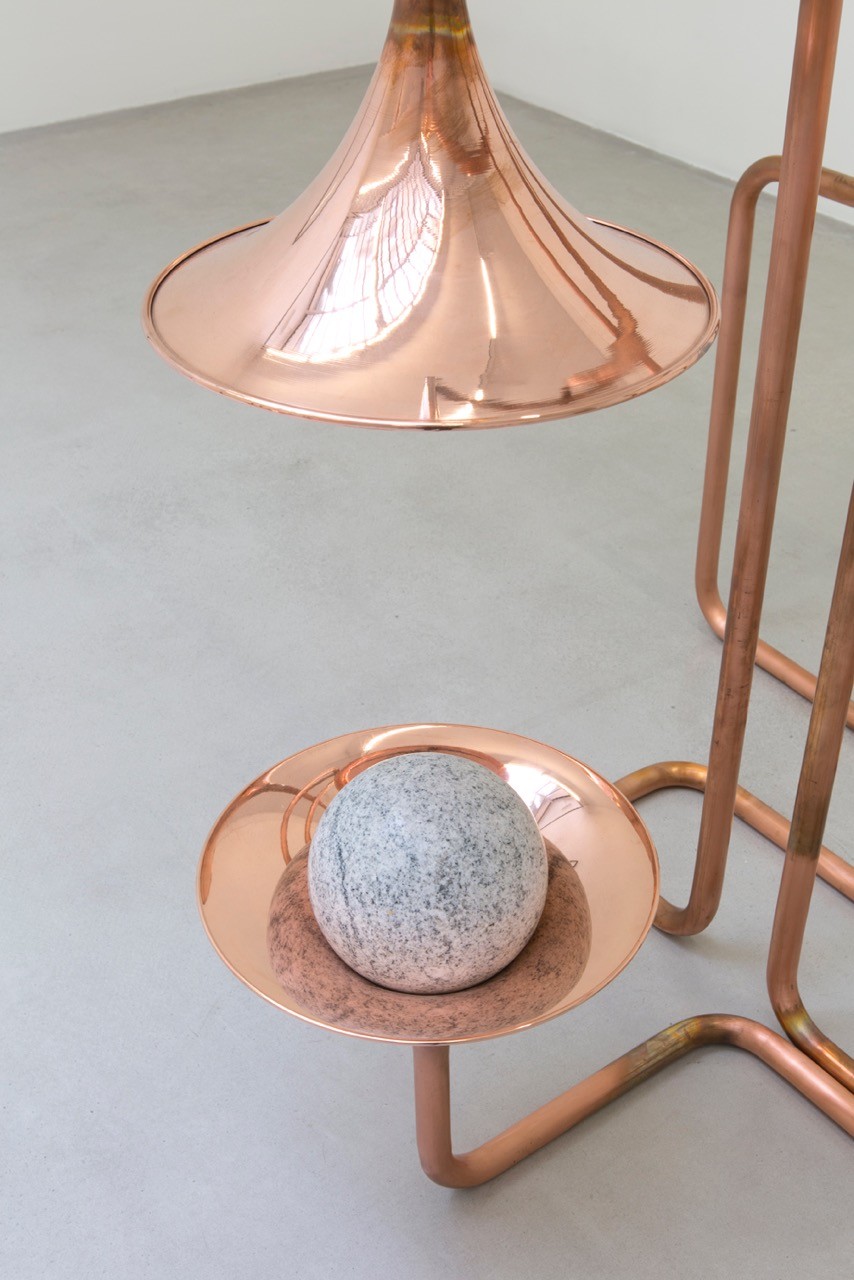 Alicja Kwade brings us face to face with questions rather than interpretations. She questions objects, presumed truths, and matter. She has framed her exhibition within the philosophical concept of aporia, a term designating an irresolvable contradiction. In its own way, with a mix of rigour and humour, each piece in the show questions the real, its limits, and its illusions. The whole gallery becomes a space of questioning.

The concept of aporia makes its perturbing nature felt as soon as one enters the gallery. Here are works of handwriting, handwriting that has been a part of Kwade’s production since 2006. She has chosen handwritten letters by figures she admires or who inspire her, and has trained herself to write identically. She has then sent her own handwriting to a graphologist for an analysis of the personality of the writer. But which writer? It is an insoluble and reiterated question. Could such an appropriation of the gesture of writing, the most direct movement between the brain and the hand, lend the artist something of the psychological and neurological characteristics of these admirable figures? Who knows...

Under the glass ceiling, Hypothetische Gebilde (2016) interrogates space in all its dimensions. Copper horns seem to explore the space, listening to it, pressed up against it in order to learn its secrets. They appear to be fixed in a movement, made up of changing matter. Matter is just a condition here, and even the sculptures, called Hypothetische Gebilde, disown themselves as ‘hypothetical’. Brass, or copper, is a conductive metal but also an alchemical one...
Alicja Kwade uses art—with its infinite avenues of possibility—to interfere with the mysteries of the universe. Aurélien Barrau, universe and multiverse explorer, has reached the same point by way of science: ‘Perhaps the real itself is not unified. Perhaps it is a sort of material [...] and we are free to use this material to create meaningful worlds. ’ The world then could be completely different... One might find there a single book holding down a block of granite weighing several tons, as in the piece Heavy Weight of Hindsight (2016), where the granite has taken flight, making for the glass ceiling in a bid for the life of a cloud.

In Alicja Kwade’s work, rocks play a primordial role. Their formation, their concretion, their pulverisation are themselves a form of aporia: is it a rock or just dust? Or is this the same thing? In the real world, this question can always be posed of the objects and matter that make it up. When does it begin, and when does it stop? What information is there about the object, what is its nature, and then who or what chose it? A definitive answer to this question cannot be found in the geological process itself. This is why rocks contain a secret entry into the real. The poet Roger Caillois defined it in the following terms: ‘Minerals: primary index from which everything dilutes, decays, and evapo-rates, perhaps all the way to the exceptions of the dreamworld and the siren call of vertigo. They convince me that the imagination is simply one of the conceivable extensions of matter. ’ Alicja Kwade explores imagination to the point of giving shape to the mute murmurings of the universe.