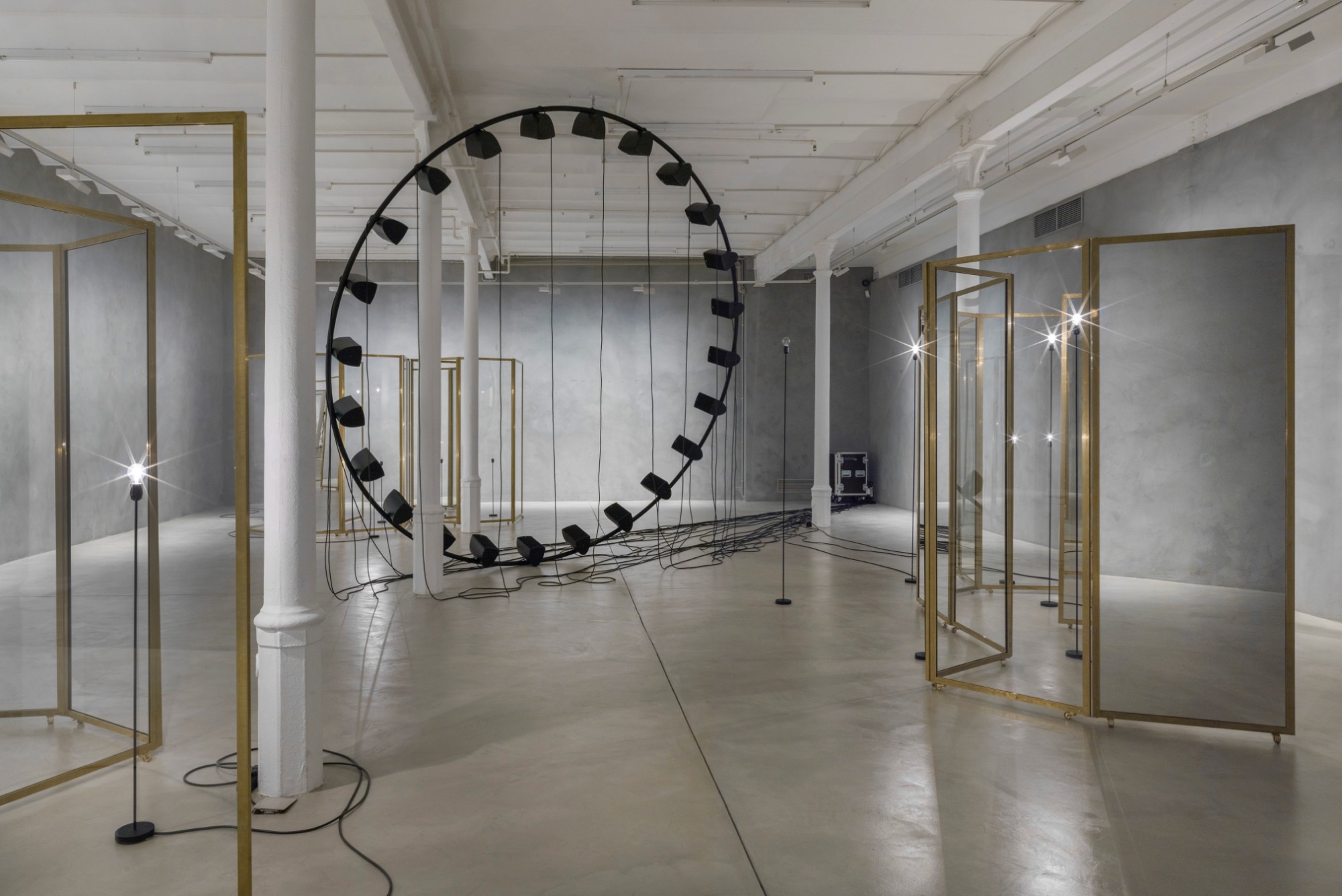 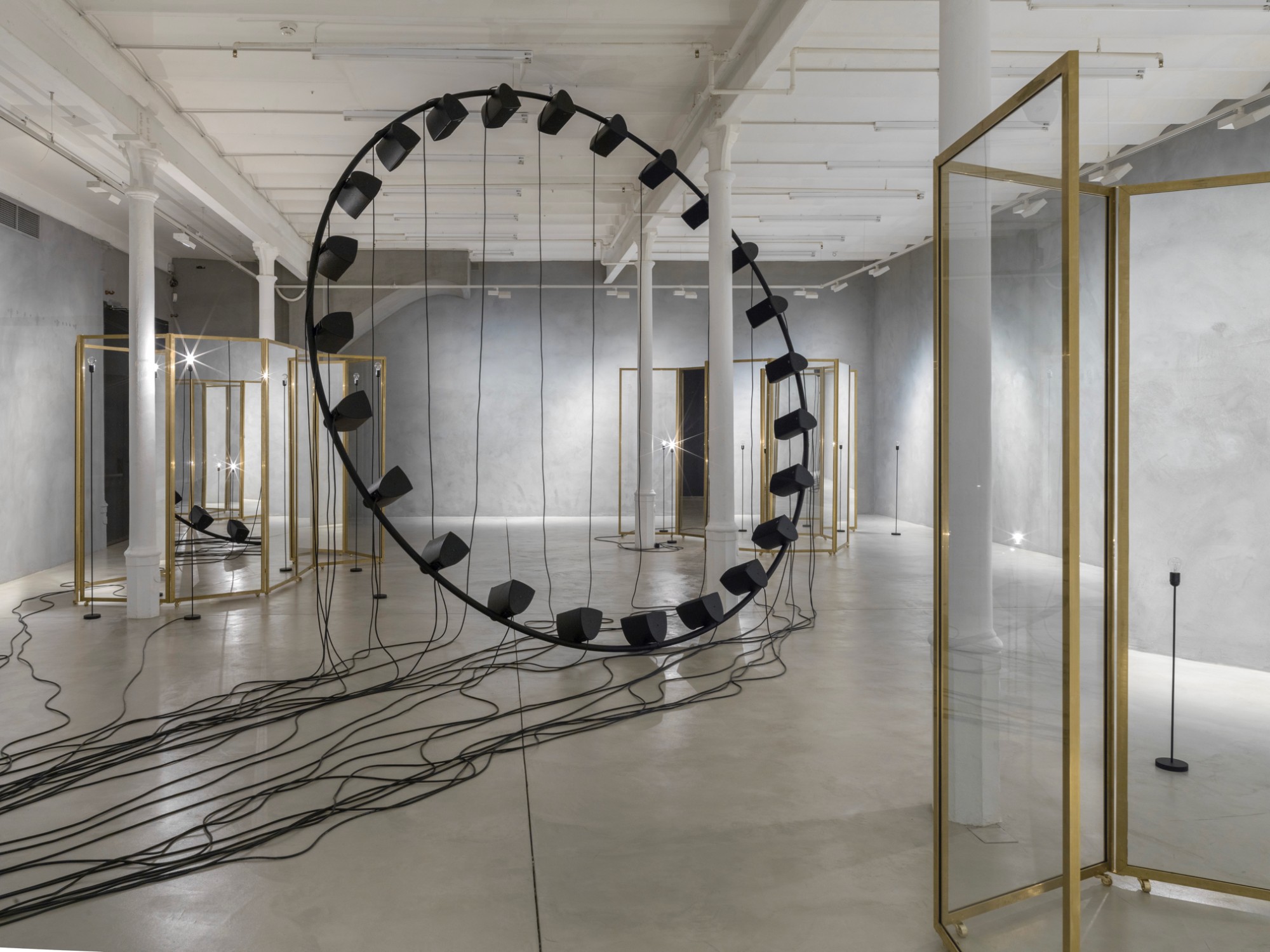 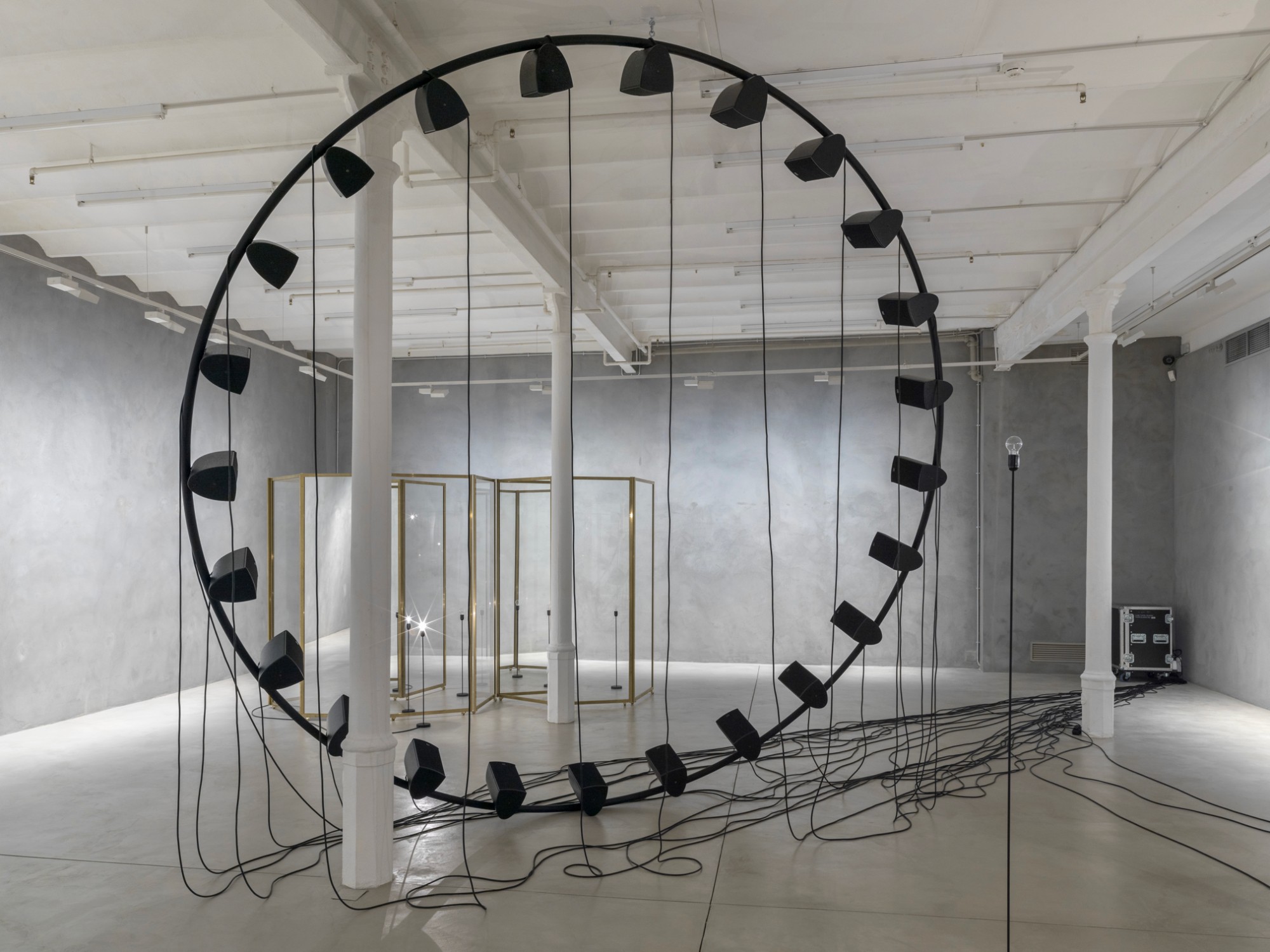 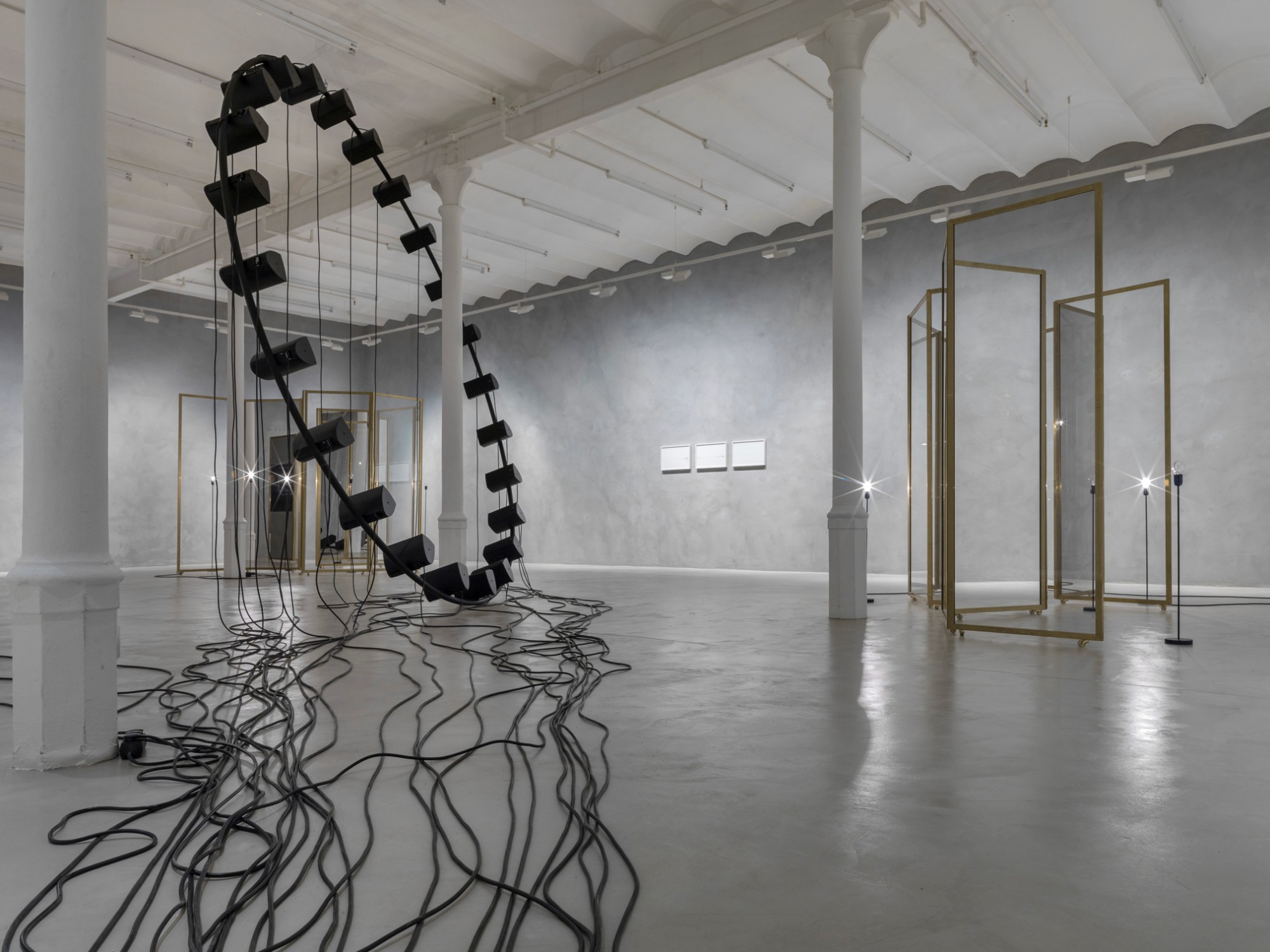 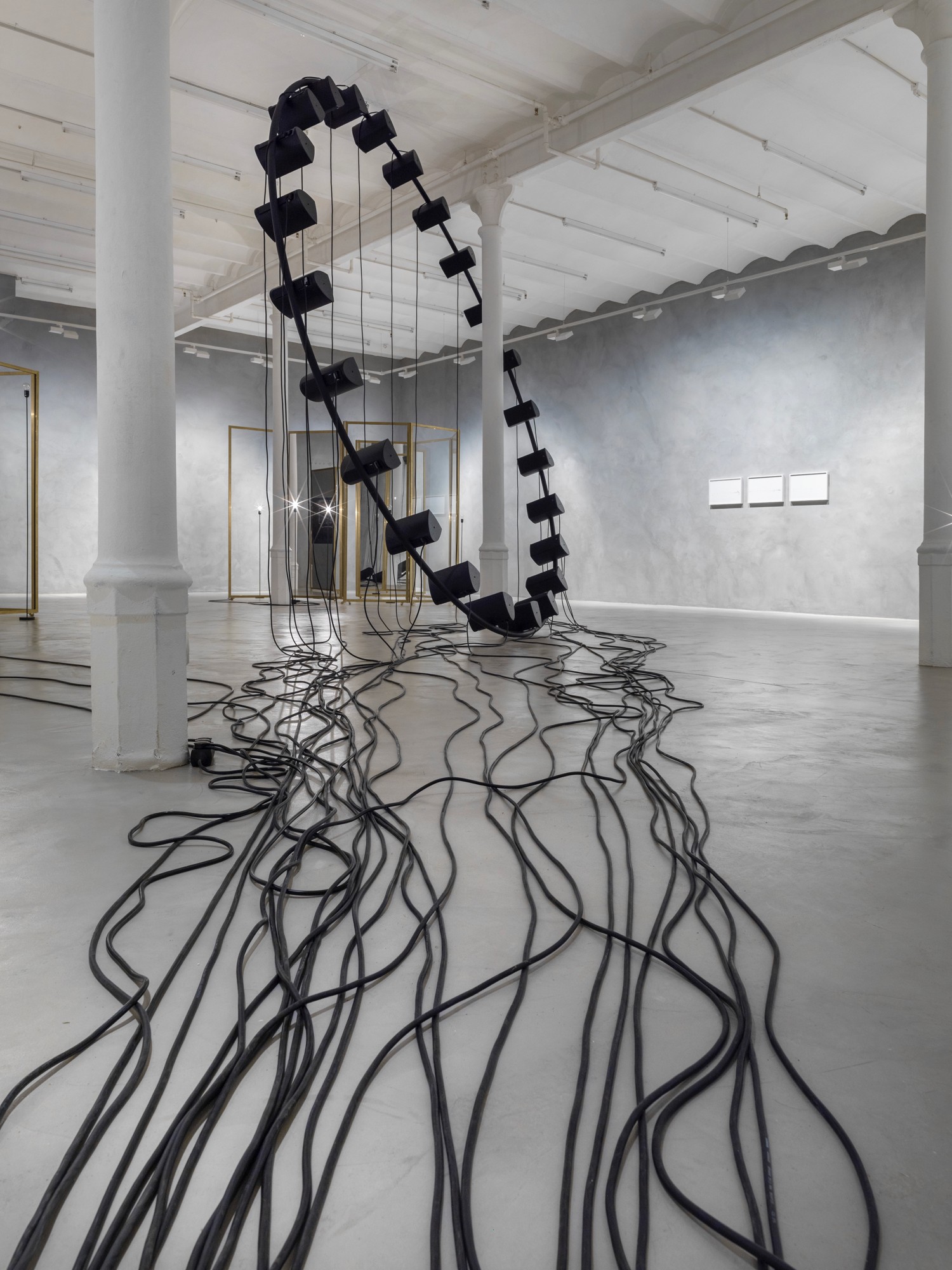 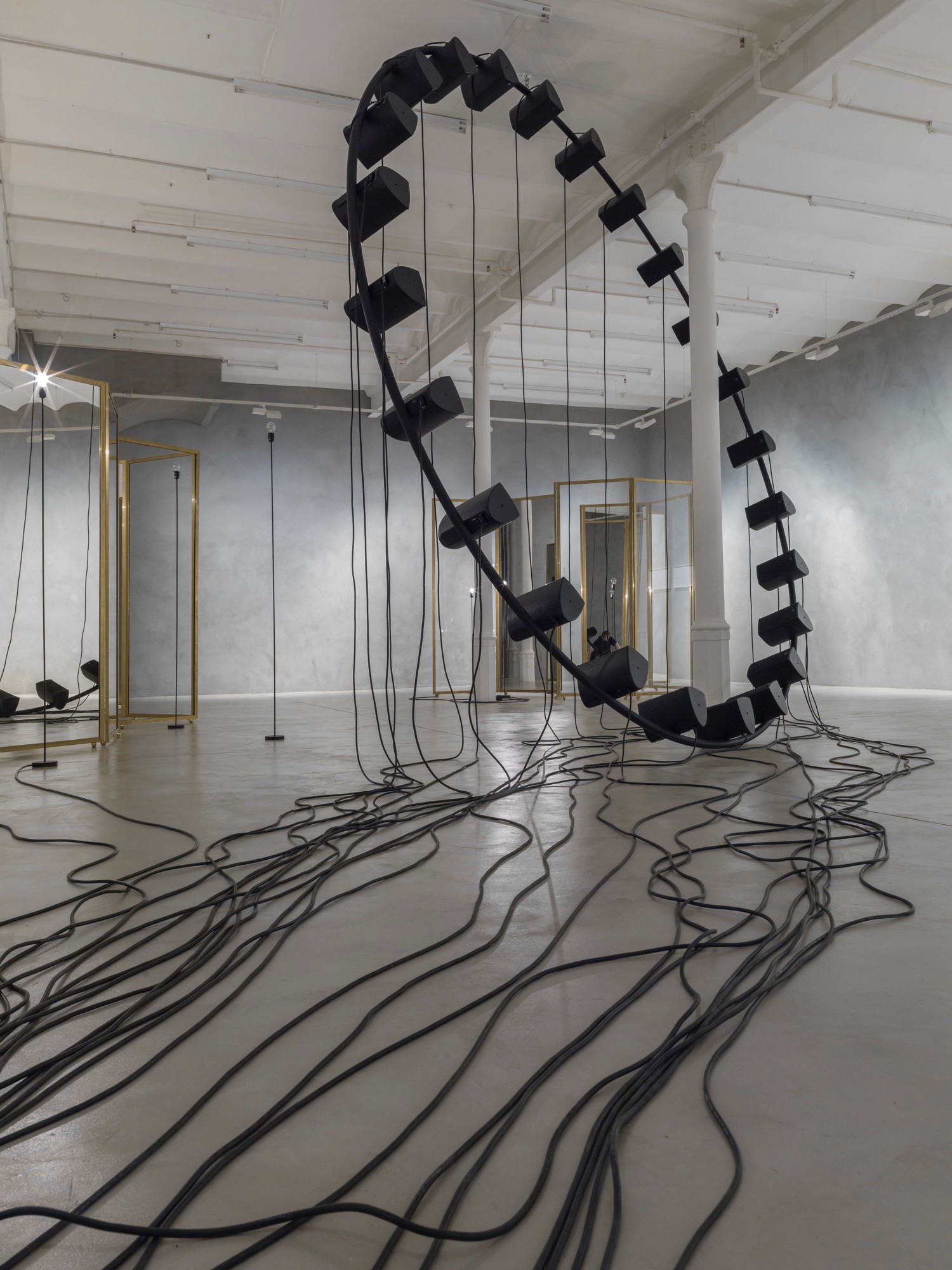 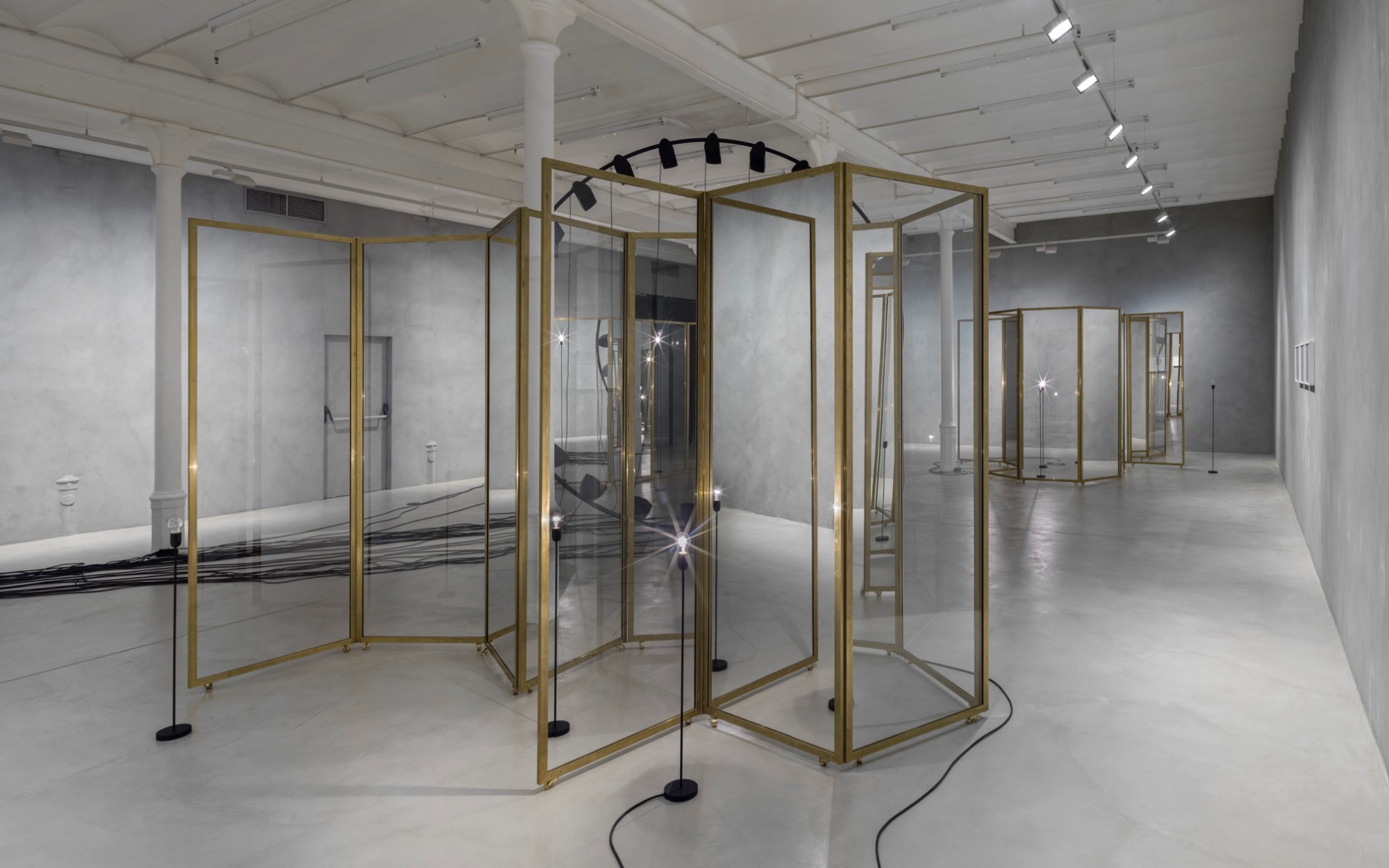 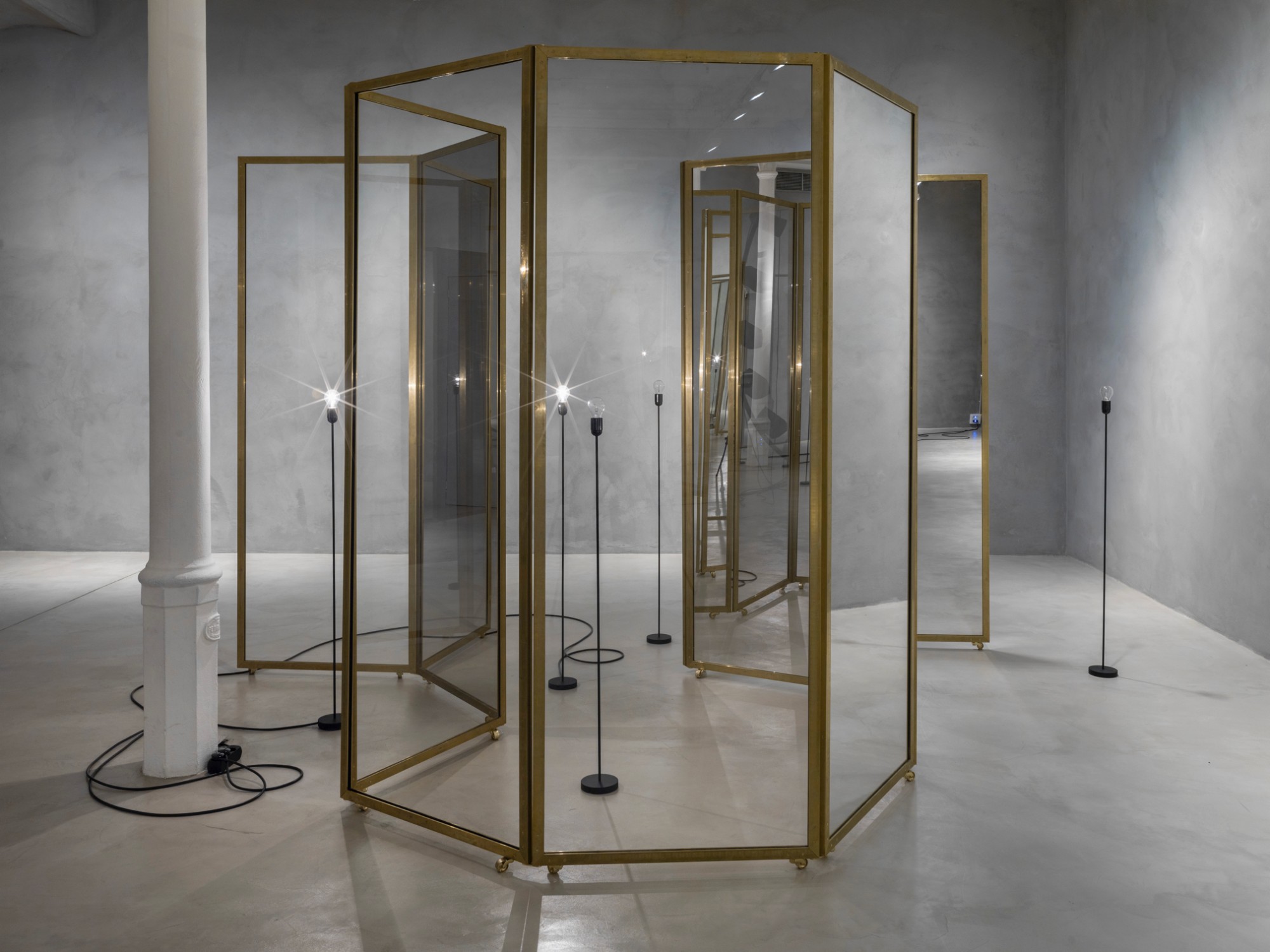 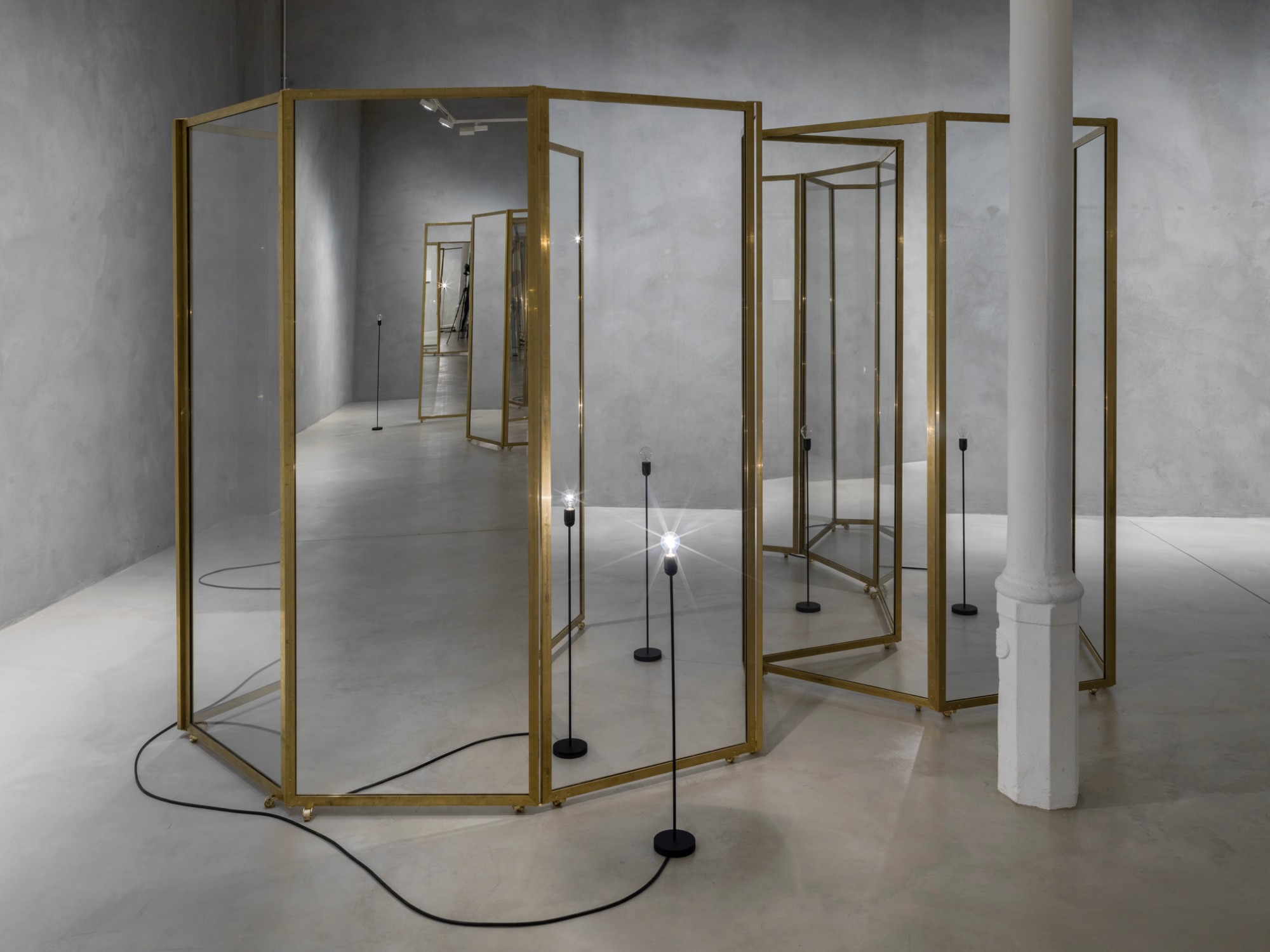 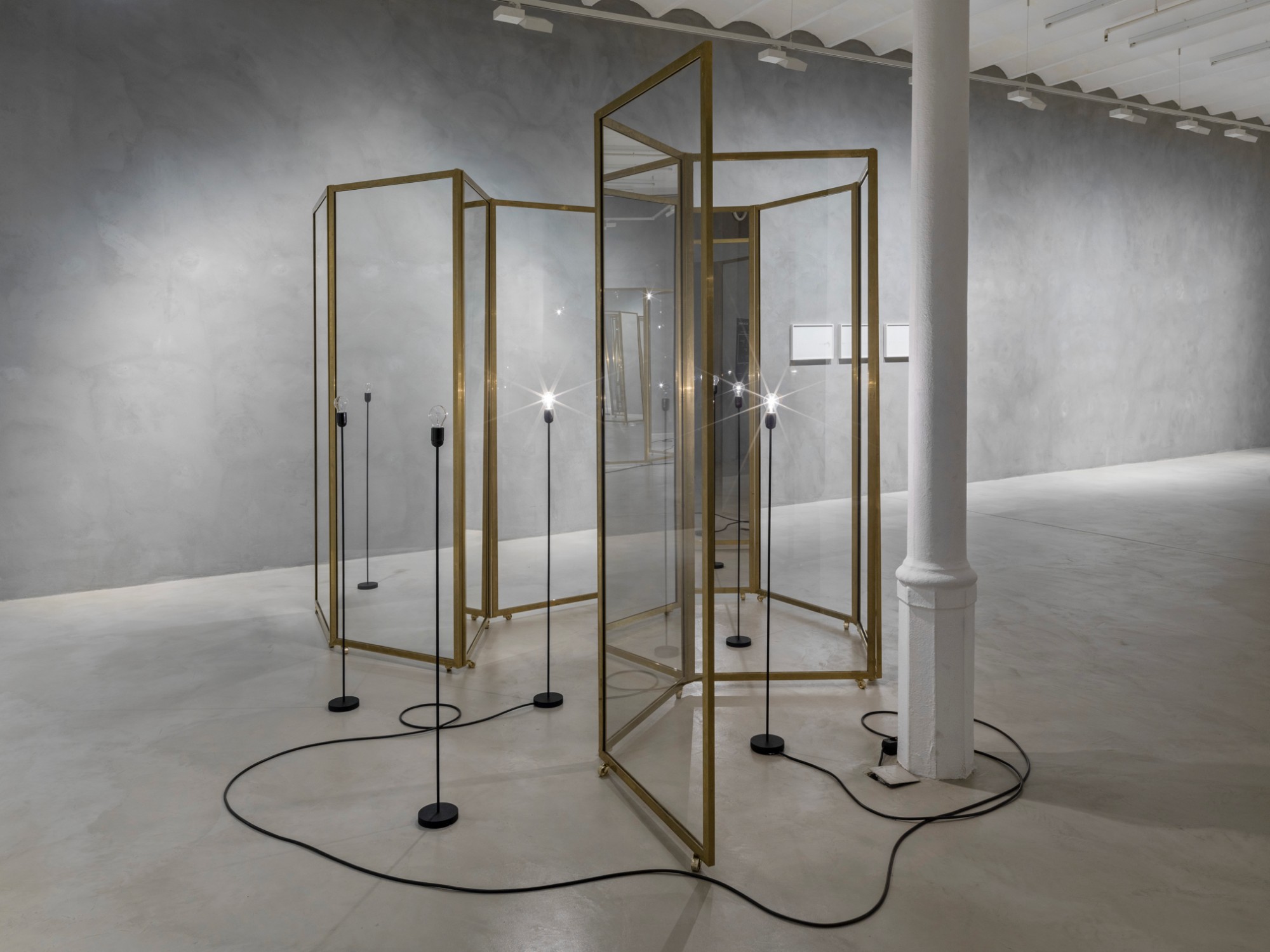 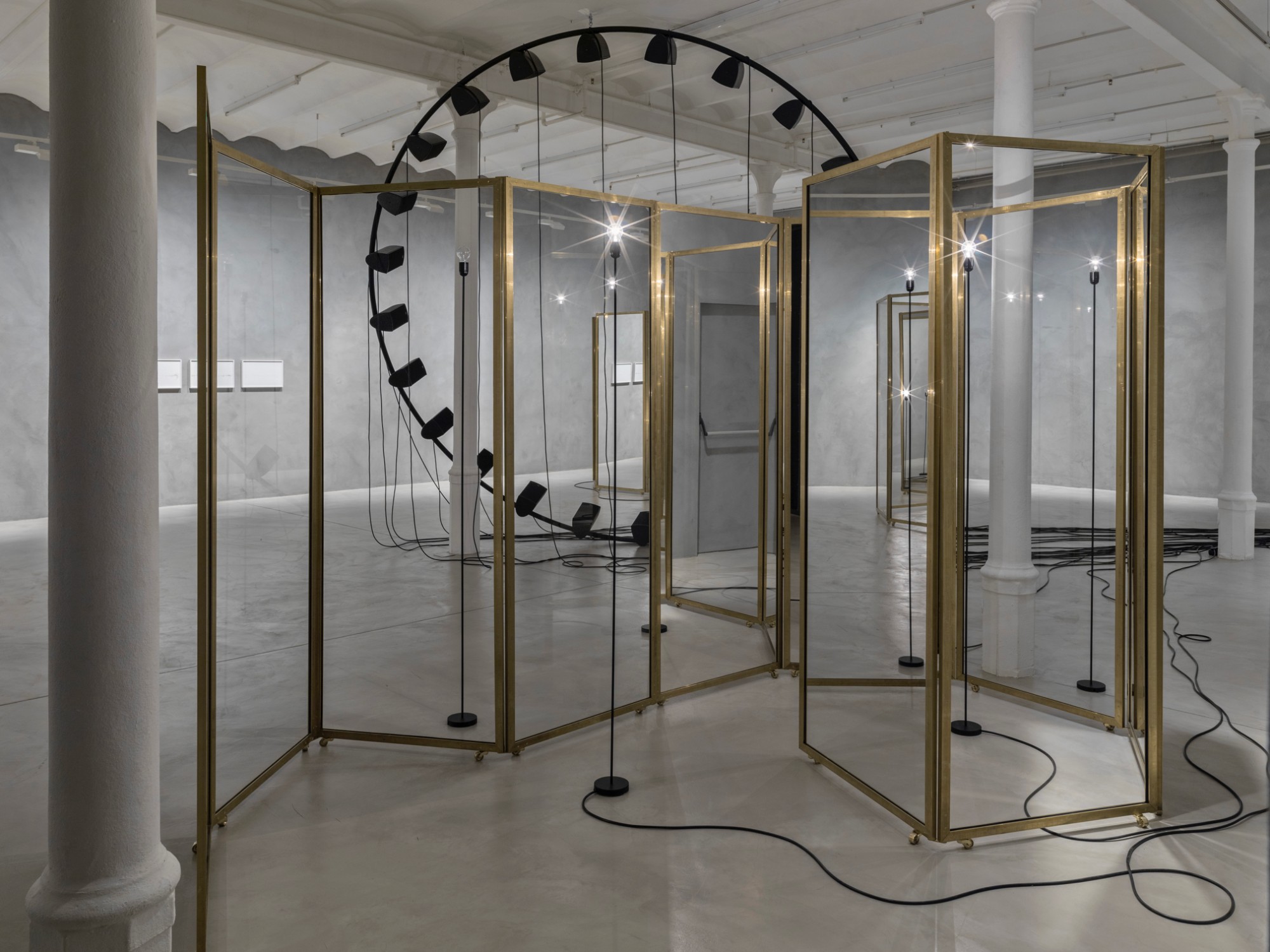 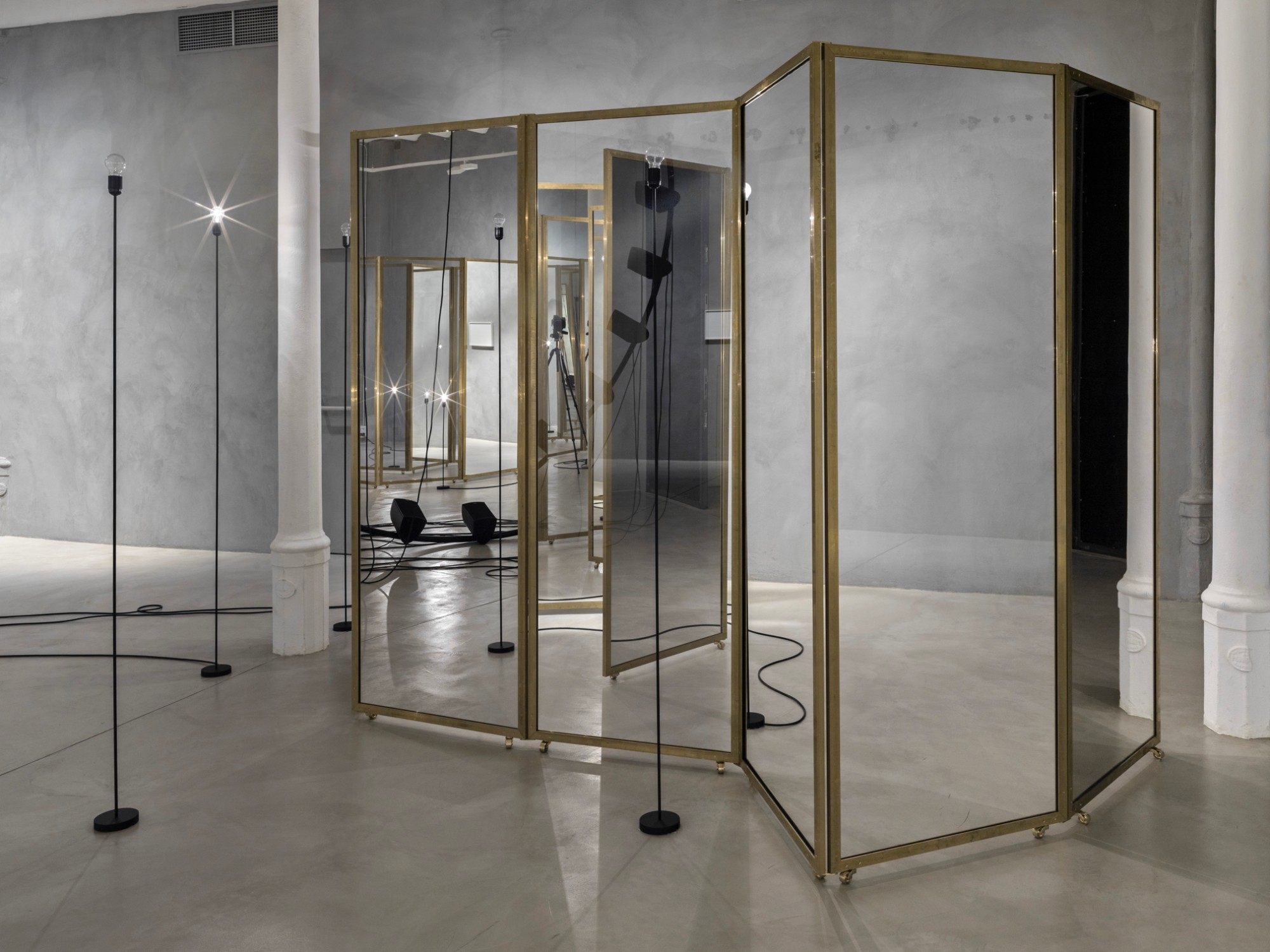 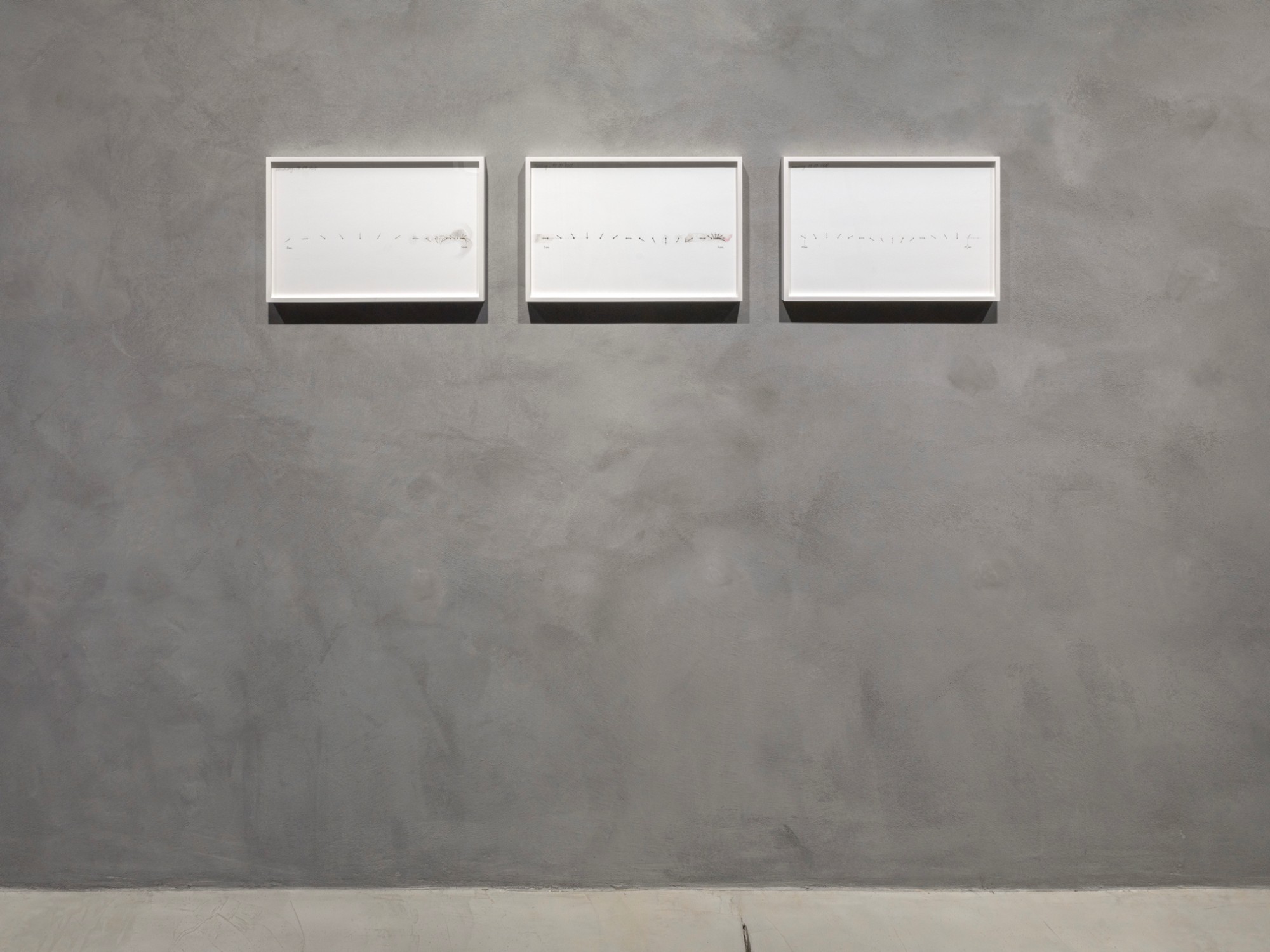 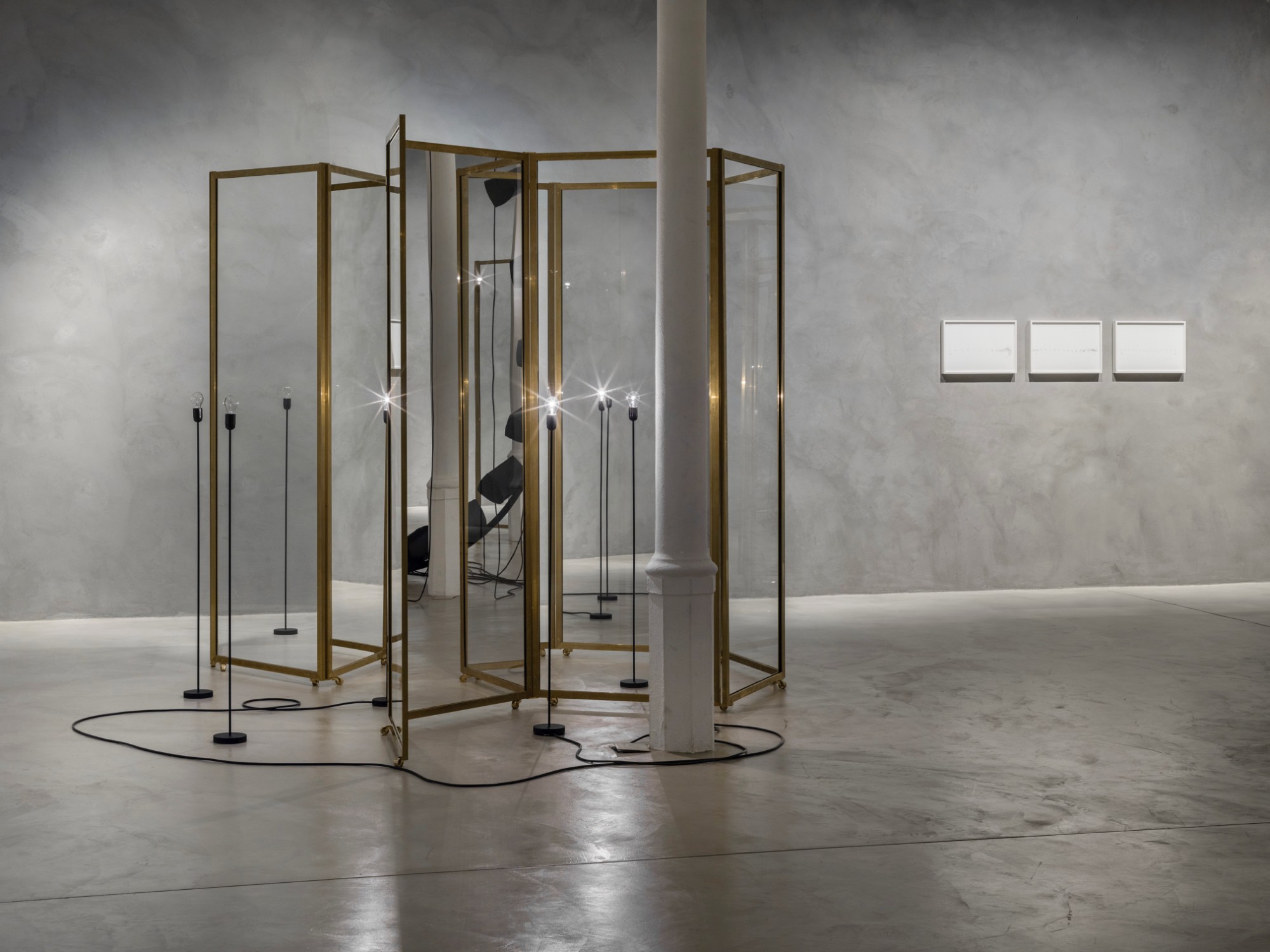 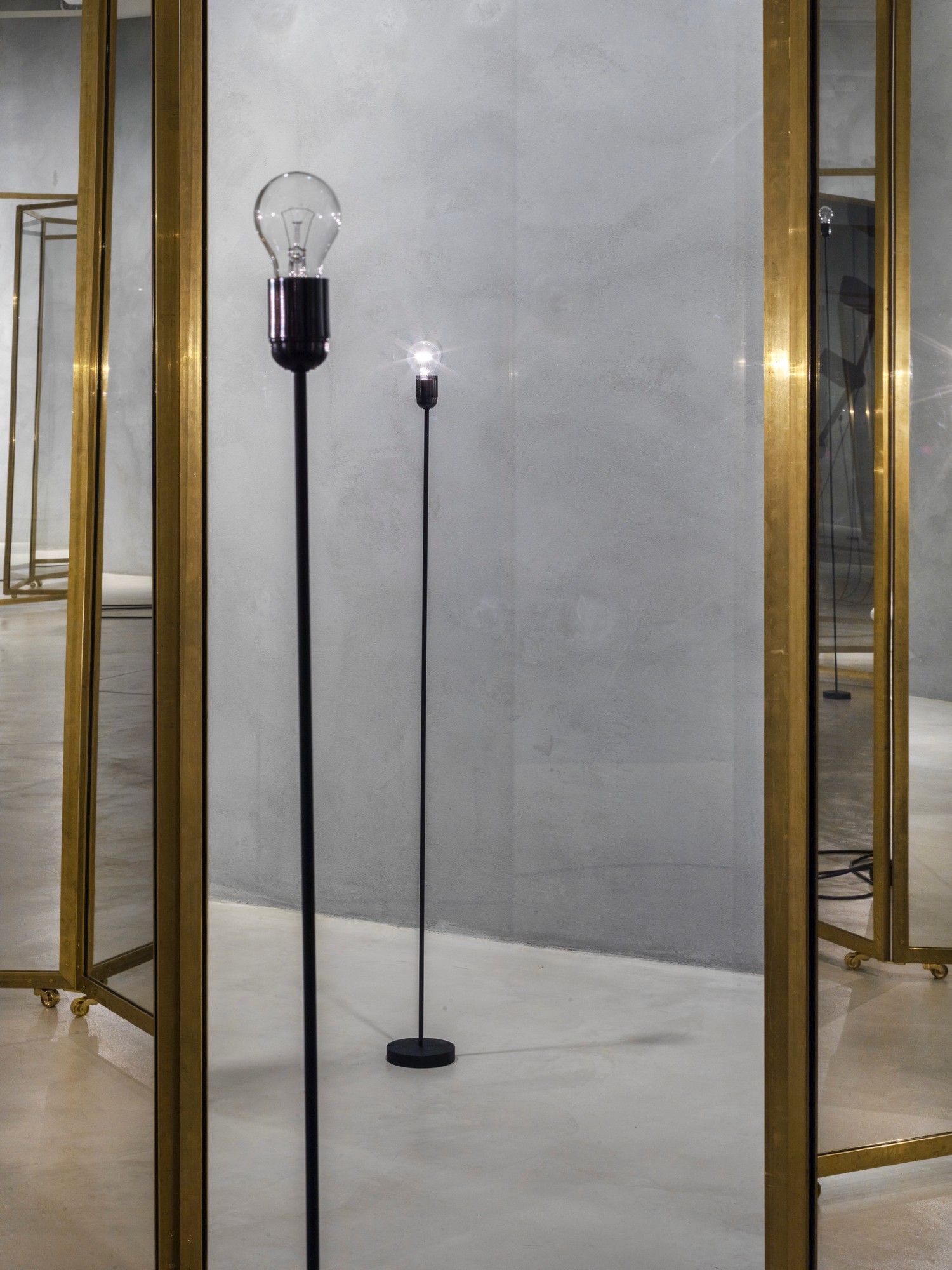 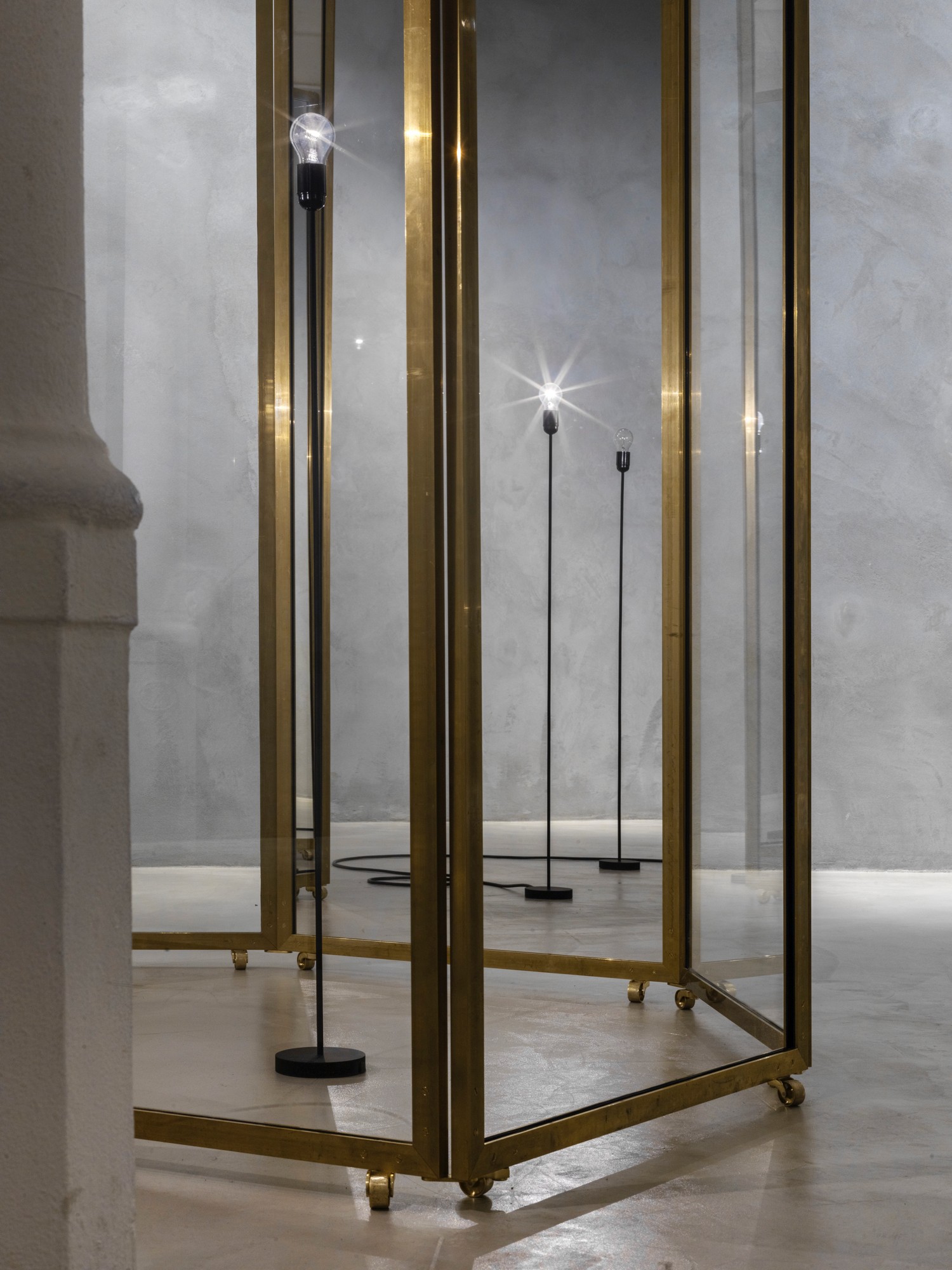 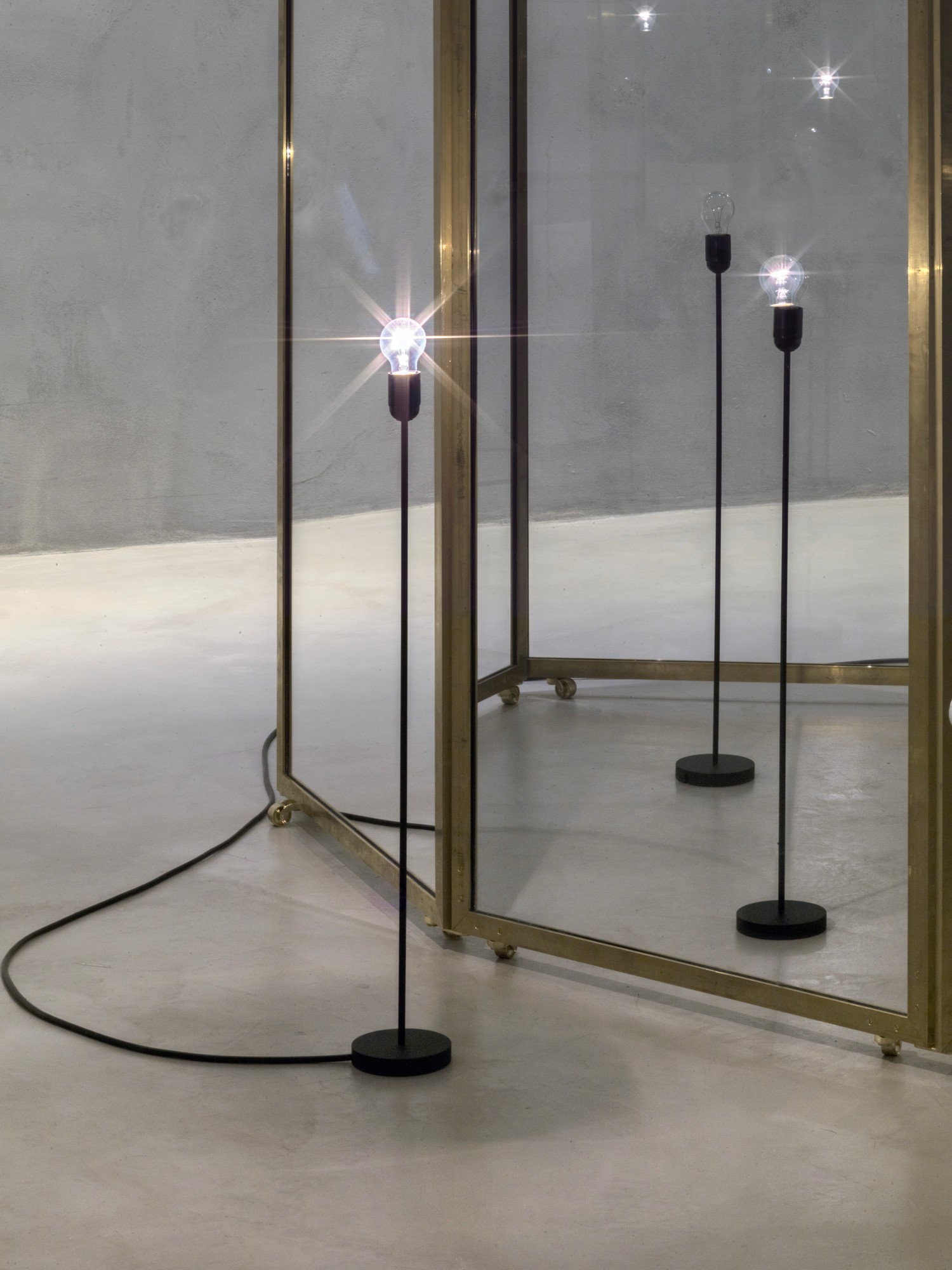 The exhibition "Glances", conceived exclusively for this space in the foundation, reveals the artists' interests in our physical and perceptive experiences about the way we occupy space and time, which she explores in three new sets of work: Clout-Count (2018), a large scale sound sculpture; Between Glances (2018), three sculptures whose layout in the space toys with the reflections from light bulbs, evoking the idea of the double; and, lastly, a series of works, In-Between (September) (2018), that capture experiences of time.

As we enter the exhibition space, we notice that it has been transformed by a series of structures whimsically arranged around the room in irregular configurations. Each piece consists of ten metal profile panels, some made out of plain glass, others out of mirrored glass and even a few empty ones. Completing the sculpture a few lamps placed on the floor in front of the panels, creating a visual play between the real object and its reflection. The repetition and change of various elements in specific configurations imbues the viewer with an illusory experience as their reflection bounces off the sculpture intermittently, making them feel like they belong in the same game as the light bulbs. The investigation on reflection, the double, materiality and space is a line of work that Alicja Kwade has been following for years.

In the centre of the room we encounter a large sound sculpture made out of twenty-four loudspeakers mounted equidistantly around the perimeter of a circular structure, resembling the dials on a clock and alluding to the duodecimal system. Sound goes through the speakers creating a spatial, pulsating movement. We can hear familiar sounds such as heartbeats (from the artist herself) and the ticking of clocks, orchestrated in accordance to our temporal experience. Although each minute contains 60 beats, it feels different from the others, and the combination of all the minutes results in a sequence that spans over the course of a whole day, that is, 24 hours. The installation immerses the viewer into the experience of space and time, the ebbs and flows of the speed and slowness with which it passes, and does so in a deep, emotional manner. The concepts of time and circularity become particularly relevant in Kwade's work, of which clocks and sound are a constant. To the artist, a clock is testimony to the human desire to measure and divide time as a means to control and shape reality.

This can also be appreciated in a previous site-specific installation, in which Kwade presents dozens of clock hands on a wall in a display of temporal spatialisation. In the framed works shown on the wall, we also find clock hands that appear at a specific time of day and disappear in another, placed on the paper in different positions and more or less clustered, but always coming out of the same centre, spatialised. Each piece is titled with a day of the week (Thursday, Friday, Tuesday…) and the date in which the artist created it. The time lived each day is reflected in this movement lapse, more or less intense, more or less constant. The relativity of experience becomes visible in these subtle collage-drawings.